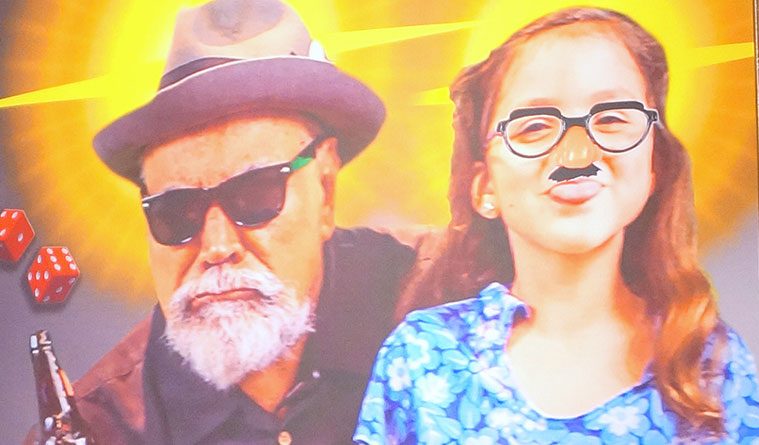 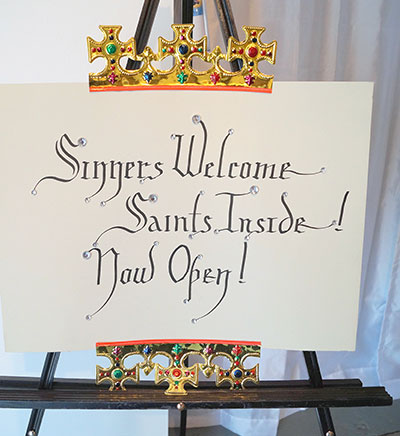 My knowledge of saints, canonization, and most things relating to Catholicism is limited to what I picked in my undergraduate Renaissance art history class. Indeed, saints have a darling place in Western art history, one example being Mary Magdalene, whose various depictions throughout centuries have ranged from the fully clothed and regal, to nude and seductively distressed—to highlight her sin, of course.

The idealization and objectification of her body, her story, of her devotion is analogous with contemporary idolization of cultural figures of present—saints, like others basking in celebrity, are exulted, touted as otherworldly although their humble beginnings and/or worldly sins are highlighted, as well, in such a fashion to make their existence tangible, but still unique.

Media artist Stephanie Saint Sanchez’s multi-media exhibition, The Lucky Seven: Adventures of the New Saints, currently on show in the Art League Houston until June 13th, turns this very tradition on its head. Sanchez’s saints, who range from the St. Qwerty Perdida, whose name is a play on that of the standard US keyboard, Patron Saint of Lost Passwords to the Patron Saint of Pasteurized Processed Cheese Food, St. Velveeta of Sheboygan, appeal to the mundane, everyday issues of the contemporary life. The absurdness of their patronage of banalities (St. Tierra of Azucar, the Patron Saint of Oddly Named Texas Towns, for example) is the binding factor in this show that highlights Sanchez’s wit and ability to nuance criticism with entertainment. 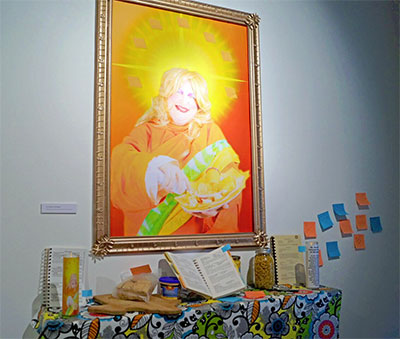 At every turn, Sanchez imbues the art historical tradition of religious representation with a playfulness that is satisfying on multiple levels. The socio-political aspects of the exhibition are wonderfully folded into this playfulness and the intentional kitsch of the show itself—a kitsch that successfully inverts the very hyper-realist depiction and portrayal of traditional figures of Catholicism. Notably, St. Velveeta of Sheboygan and St. Schmatta of Arme-Salut, the Patron Saint of Second Hand Clothing Stores, highlight who these saints actually represent— those of us raised with velveeta cheese (and who perhaps still use it out of the sight of our Whole Foods obsessed friends) and who know the wonders of Value Village and Family Thrift. These saints are for the regular folks—and they provide help and guidance in the most humorous of ways.

The installation includes alter pieces for each saint adorned with items symbolic of his or her focus— ATM cards for St. Qwerty Perdida, old books for St. Schmatta, maps and cowboy boots for the St. Tierra of Azucar. In the center of the space are chairs arranged as makeshift pews.  A film is projected onto the wall that chronicles a couple’s encounters with the saints, beginning with a visit from the Patron Saint of Bad Ideas, St. Simon K. Si y La Jovencita de Shenanigans, whose poor advice sends them on a comical adventure.  At one juncture after they have stolen a box of cash (St. Simon’s advice), a pair of police officers in pursuit of the couple call-in to their station for help. Instead of acknowledgment of the need for back-up, the officers must reiterate to their colleagues, “yes, a white couple” has committed the crime–a nice allusion to the nation’s current situation with law enforcement’s pejorative view of people of color. 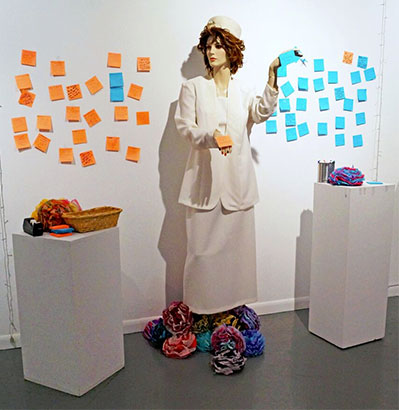 The entire time I watched the film I smiled, giggled, and, as soon as a new saint appeared on the screen, felt compelled to run over to their altarpiece to see with which trinkets it was adorned. Overall, Stephanie Saint Sanchez’s exhibition is refreshing: she effectively canonizes everyday people and commonplace things, making their traditionally insignificant existence relevant and important.  This exhibition has an unique ability to bring the smallest details to the forefront and exult them in a way that is meaningful instead of exhausting, meaningful because their “rising up” is solely for their normality and truthful presence, and nothing else.