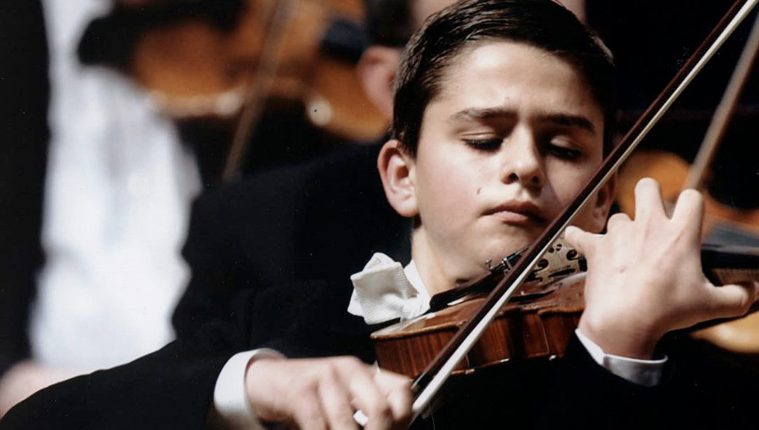 Child protégées have a hard row to hoe. When a violinist is invited to play in concert with professional orchestras at the age on nine, site it is difficult to find time to just be a kid. The history of music is littered with the sad stories of brilliant child violinists who are unable to cope with the sudden fame and demands that would confound even some young adults.

William Hagen, store who will appear with the Fort Worth Symphony Orchestra April 13–15 playing Tchaikovsky’s Violin Concerto, seems to be the well-grounded exception.

In a recent phone interview with the 19-year-old, he sounded just like any other teenager who has found himself in the spotlight. “I like playing baseball as much as playing music,” he said bluntly.

He played competitive baseball all through high school, scoring 24 career home runs. Only college put an end to his participation. “I used to travel with super league team for years. I never hurt myself except once. I got beaned on the elbow and lost feeling in my arm monetarily.”

The young violinist completely dismisses the injury. “Baseball is the safest spot for a violinist,” he said. “We wear a padded mitt on the hand that catches the ball.”

I suppose that is true, but it is counter-intuitive that a sport that uses a weapon-like bat and where a very hard ball travels at over 100 miles per hour aimed right at you, is the best place for someone dependent on their fingers, arms and hands for a living.

Hagen is quickly emerging as one of the most talented violinists of his generation. A native of Utah, he began violin lessons at the age of four. He now studies with Itzhak Perlman at The Juilliard School where he is the recipient of the Dorothy DeLay Scholarship in Violin.

“Juilliard doesn’t have a baseball team,” he said with an amazing lack of irony. “You could put together a killer chess team perhaps,” he chuckled, “but Juilliard is not really known for its athletic prowess.”

The Juilliard School, located at the Lincoln Center for the Performing Arts in New York City, has produced such notables as award-winning actress Viola Davis, actor Kelsey Grammer and composer Philip Glass, but alas, no sports pros.

“We don’t have a gym,” he said. “We go over to the projects (not the best neighborhood in New York City) to play pickup basketball. They know that we play music but they don’t really know that I will soon be playing a concerto with a symphony. I am just trying to stay normal.”

You have to admire that.

What is definitely not normal is a young virtuoso playing the Tchaikovsky concerto, which presents a challenge to seasoned adults, with the Fort Worth Symphony. He has never played it all the way through with an orchestra before. He has played individual movements with orchestra, and played the whole thing many times with piano. He doesn’t worry about endurance, though.

“If you play it through completely, without all the tutti parts (where just the orchestra plays) with piano, then I can easily make it in concert. I can take a nap between movements,” he added with a laugh.

To his credit, he has played the Brahms (violin concerto) with orchestra before and that is a challenging piece of music, so his confidence level is high. “The Tchaikovsky is full of heavy and hard playing from the first to the last note, and I respect that demand. But, it really feels like it is my piece and playing it comes very natural to me,” he said.

In speaking, he seems to take life in stride. Originally from Utah, he says he is enjoying life in the Big Apple.

“New York City is a really expensive place to live and the hustle and bustle never stops. You find yourself longing for a back yard,” he said. “But you can’t have the same opportunities to hear great music anywhere else. The Berlin Philharmonic was just here. All these great orchestras come through all the time. It’s amazing. But, I am really happy to head back in Utah for spring break.”

Adding to the pressure of living in the city, he is studying with Isaac Perlman, arguably the greatest living violinist. “It is nerve wracking to have a lesson with him,” he said with some understatement. “But he doesn’t cause the nerves, it is my desire to do the best I can for him.” It is that desire that sets him apart.

Hagen has, understandably for someone so young, never worked with FWSO Music Director Miguel Harth-Bedoya before. He played the Bruch concerto for him about a year ago. “Maybe it was an audition, now that that I think about it,” he said. “Whatever happened, it must have been good because he hired me.”

Good? This from a kid who has played with the Saint Louis Symphony Orchestra, the Albany (New York) Symphony and appeared at the John F. Kennedy Center for the Performing Arts and the Metropolitan Museum this spring with Mr. Perlman and alumni of the Perlman Music Program. North Texans now get the chance to catch this young talent, whose Salt Lake performances were cited by the media as playing “with the heart of a poet, creating elegant, lyrical phrases and spine tingling tones.”