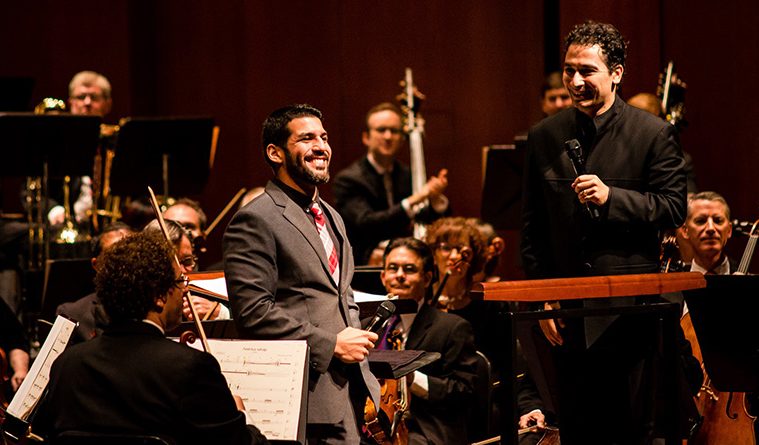 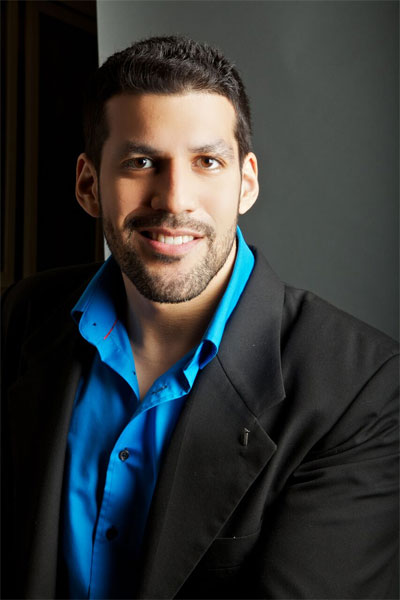 Jimmy López got hooked on classical music when he was 12, thanks to J.S. Bach’s counterpoint. As a teenaged conservatory student in his native Lima, Peru, López found a new fascination: the scintillating orchestral works of Magnus Lindberg, Einojuhani Rautavaara and other contemporary Finns.

“I think it was the orchestral colors that attracted me very much,” López recalls. But the fascination went further. Not only did Finland boast a thriving new-music scene, but the idea that a nation of only 5 million people supported 25 orchestras tantalized the budding composer. López won a spot in the Sibelius Academy in Helsinki, and at 21, he landed in his new home. Besides cultivating his musical skills, he witnessed the region’s celestial light show: the aurora borealis, the inspiration for the violin concerto that the Houston Symphony premieres Sept. 22.

Beholding the Northern Lights, López explains, usually involves a second natural marvel, the silence of the Finnish countryside. “A friend of mine once took me to a very small town. We were talking (outdoors), and he said, ‘Stop. Just listen for a moment.’ I couldn’t hear anything. I was listening to my heart beating. I couldn’t believe it. When you see the aurora, it’s sensorially overwhelming, in that one of your senses–your hearing–is deprived. But in the other one, you have this feast.”

The concerto’s premiere will launch López’s three-year stint as the Houston Symphony’s composer-in-residence. The Peru native succeeds Gabriela Lena Frank, who is Peruvian-American–a fact that made Andrés Orozco-Estrada, the orchestra’s music director, hesitate about turning to a composer with similar roots.

“My first thought was a little bit, ‘Maybe not,’” Orozco-Estrada said last spring after the announcement. “But then I went closer, looking at the different types of music he has done. And I started talking to him. … I saw a completely different composer.”

López’s four-movement dance suite Fiesta!, which the Houston Symphony played in June in the Miller Outdoor Theatre, salutes trance music’s hypnotic aura, and it embraces merengue and techno rhythms. “The challenge of creating musically sensible interactions out of the juxtaposition of apparently incompatible musical sources–some of which result in unexpected contrasts–fascinates me,” López explains in his program note. Just as baroque composers based works on dance forms of their own time, he thinks today’s equivalents “have enough potential to justify further development, but always keeping the primeval driving forces present in them.”

But this eclectic side is a relatively recent development. As a teenager bewitched by Bach, López focused entirely on the European classical tradition, he says. When the new Lima Philharmonic, in need of a home, set up shop in his school’s auditorium, the group’s sessions became his hangout. “Imagine the luxury of having a symphony orchestra rehearse at your school,” he says. “I stayed after school and listened to the orchestra with scores in hand.” 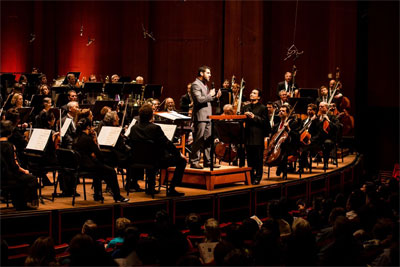 Guided only by what he could glean from music-theory books, López had already made fledgling efforts at composing–such as attempts at Bach-style counterpoint that “broke all possible rules,” he recalls with a smile. Only as he was graduating from high school did López began taking composition lessons. The veteran Lima teacher, who guided him through the conservatory work, became “my mentor, my personal Yoda.”

Though Latin American and Afro-Peruvian music had been around him, López says, he never thought of it as creative fodder for himself until well into his time in Finland. People would ask him: What do you bring from your own heritage? “I thought, ‘Yeah, my heritage. Wow, I should look at it.’ … I realized that there is a large number of composers in a similar situation to me–who emigrate from a country with great musical traditions, but not necessarily in the orchestral or classical genre. What do we do in that case? I decided, ‘Maybe it’s time to look back.’”

The first major work drawing on his heritage was América Salvaje, the work that introduced López  to Houston audiences when the Houston Symphony performed it in the 2016 Fiesta Sinfonica. A salute to Peru’s mix of Inca and Spanish heritage, it begins with the scraping of conch shells to “evoke a world that was pre-Western.” The Fort Worth Symphony commissioned López’s Peru Negro, which “stems from a personal desire to assimilate Peruvian folk music to the point of blending it seamlessly with my own language.”

By the time Peru Negro premiered in 2013, Lopez had settled in California, where he earned a doctorate from the University of California, Berkeley. One of his career high points came in 2015, when Lyric Opera of Chicago premiered Bel Canto, López’s first opera. It’s based on the eponymous Ann Patchett novel, which in turn is based on a real-life drama that unfolded practically on the teenage López’s doorstep: the four-month hostage crisis at the Japanese embassy in Lima in 1996-97. PBS’ Great Performances gave López a bonus when it telecast Bel Canto a few months after the premiere, and he hopes the exposure will lead to more performances.

Lopez declines to go into detail about Aurora, his new violin concerto, wanting instead for the audience to “enjoy it and be surprised by the whole experience.” The solo violin represents a person beholding the lights; the orchestra, natura and the surroundings. In the second movement, titled “Borealis,” he wants listeners to “open their ears to the waves of sound that will come their way—mostly from the orchestra, but also from the soloist. Listen to the soloist echo through the whole concert hall.”

During his Houston Symphony stint, López plans to work with student composers on a project going beyond the typical master class or two. Rather than looking at work the students have already done, he’ll coach them–in tandem with their regular teachers–as they create works that will be unveiled in a group showcase.