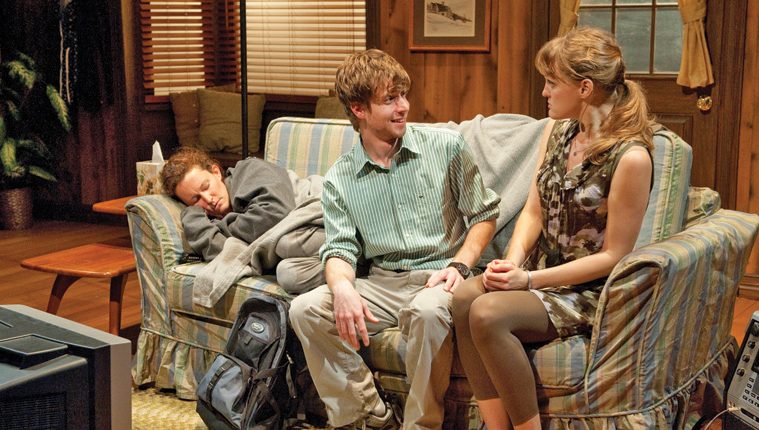 Native Texan Christopher Sykes is 23, click but he knew it was his destiny to be an actor at the age of 8. He had plenty of time to get used to the idea, pill singing and dancing in holiday church plays. Unruffled by discouragement from peers and faculty, he persisted in middle and high school, consistently qualifying in the National Forensic League’s public speaking tournament and being recognized by the University Interscholastic League All-Star cast for acting. So far, he is making his mark in unconventional comedies; the high camp of Level Ground Arts’ Santa vs. the Martians, Rover Dramawerks’ farce Black Comedy and most recently the quirky four-person comedy, Tigers Be Still, now on stage at The Dallas Theater Center. Arts writer Christopher Soden spoke with the young actor.

A+C:  Could you describe your experience at the local performing arts college, KD Studios?

Christopher Sykes:  I went to KD Studio College for two years, in their intensive conservatory acting program. I received my Associate of Arts Degree in Acting, and met some of the kindest, most understanding people I’ve ever met. I walked out of that school every day feeling more comfortable about my passion for theater. The faculty helped me realize that quality of knowledge all depends on the amount of effort you put in.

A+C: What has been your most challenging role? Most pleasurable?

Christopher Sykes:  If I had to choose the MOST pleasurable role it would by far be Zack from Tigers Be Still, that I am currently playing with Dallas Theater Center. It’s directed by the incredibly talented and equally cool Hal Brooks. You can just feel a gust of professional, collaborative, artistic growth when you walk into DTC.

A close second would definitely be Brindsley Miller from Black Comedy, directed by the brilliantly equipped Lisa Devine, with Rover Dramawerks. Black Comedy also happened to be the most challenging because it was done “in the dark” and demanded “blind” physical comedy from my character. I learned so much about farce, and the concept of using senses other than sight.

The cast was so open to putting together the perfect puzzle, by any ways necessary. Meticulous physical timing was involved, especially when it came to moving almost all of the furniture back and forth. I would never do that show again unless Lisa was directing it. Her guidance was infinitely helpful.

A+C: Was it difficult getting into Zack’s head?

Christopher Sykes:  At first, yes. Zack is an angry guy, and I’ve always been rather laid back. For awhile I had trouble shifting gears after performance. Just as with any other role though, switching minds for a couple hours has gotten progressively easier.

A+C: What has been your best moment on the stage?

Christopher Sykes:  My favorite would have to be from my high school role as Thenardier in Les Miserables. Singing “Master of the House” definitely holds up high. It also began my love for character acting.

A+C: What do you love most about acting?

Christopher Sykes:  I love acting because of its consistent ability to change lives, leave permanent impressions on my personal life, and open the minds of audience and actors alike. I love the artistic collaboration. I thrive off of it.

A+C: Is there a theorist you tend to follow: Hagen, Meisner, Stanislavski, Boleslavsky, Strasberg?

Christopher Sykes:  I know quite a few actors who swear by method acting. I’ve studied them all, but found by using my own research methods, I’ve been far more satisfied. I don’t like to put a ball and chain to my art. It’s mine. Not some guy who thought they had it all figured out.

A+C: Do you find theater companies like Level Ground Arts to be different?

Christopher Sykes:  Yes, and that is what I love about Level Ground Arts. They stay away from doing the usual shows. They do fresh work and some of the most entertaining shows around. I believe both LGA and Rover Dramawerks have an extremely positive future ahead of them.

Christopher Sykes:  I believe Dallas could be the next great theatrical hub. The only thing holding us back is disbelief in Dallas’s ability to be the next big, live entertainment mark on the map. We have the perfect theaters to inspire a flood of rising talent and creative devotion. We have more than enough passion to surpass any artistic community.