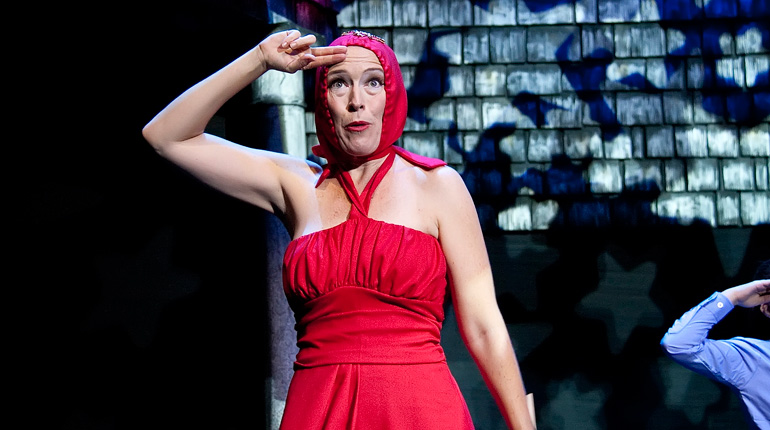 Midway: is it a carnival or a crisis? That is the question gifted chanteuse and professional actor Diana Sheehan sets out to answer in her cabaret performance opening March 2 as part of WaterTower Theatre’s 2012 Out of the Loop Festival.

Reaching the midway point in life can be a wake up call for anyone; Sheehan explores its moments of celebration and sorrow through an eclectic array of American songs of desire and longing, re-awakened dreams and hopes. One of the North Texas region’s most respected actor/singers (she received multiple regional awards and highest praise for her performance as Edith/ Little Edie in WaterTower Theatre’s 2009 production of Grey Gardens), Sheehan has performed cabaret at New York’s Triad, San Francisco’s Plush Room and Boston’s Club Café. She starred in the Off-Broadway hit, “Forbidden Broadway” in its New York, Boston and Cleveland productions and in its national tour.

Out of the Loop audiences will have the privilege of attending this distinguished performer’s cabaret four times during the festival: March 2 and March 8 in the evening slots, March 4 and March 10 at matinees, all sure to sell out at the intimate Stone Cottage venue.

Asked about his opinion of Diana Sheehan after directing her (“Grey Gardens”, “Black Pearl Sings”, “Shooting Star”), here’s how Water Tower Theatre’s Artistic Director Terry Martin describes Diana Sheehan: “I love to work with her! She’s zealous in her determination to do the best work possible, always serving the play, daring in her willingness to emotionally go wherever a play requires, even if it can be unattractive and frightening…she’s unwavering in her commitment to and love of her craft.” Sheehan met with arts writer Alexandra Bonifield and offered insight into her background and what to expect with her cabaret “Midway”.

A+C: How and when did the performing bug bite you?

SHEEHAN: My parents took me to see “Jacques Brel” and “Cabaret” in intimate venues when I was a young girl. I fell in love with musical art, its close-up intensity and expression, and began singing. I began studying in earnest by the time I was 16, along with performing in school musicals and madrigals and singing folk mass with my guitar. I’ve never stopped performing, or loving it, since.

A+C: “Grey Gardens” at WaterTower Theatre brought you to regional prominence. How was that show special for you?

SHEEHAN: I felt like it was written for me. The character had such legitimate depth. Director Terry Martin encouraged me to go deep, to find where the music infused my character and where her actions and feelings could get expressed best through the show’s music. I also met James McQuillen there, the show’s music director. He became my vocal coach and is my music director and pianist for “Midway”; his understanding of songs and vocal performance is incredible.

A+C: What inspired you to create “Midway”?

SHEEHAN: I wrote it four years ago, when my children were both in school all day and I found myself with unexpected time to focus on art. I realized, to my surprise, I had become creatively shut down. It felt like I was having the start of a mid-life crisis! I began listing songs I loved, some I sang in my 20’s, lots of songs, ones that spoke to me about love and life and hope. Suddenly I knew I wanted to perform them in a cabaret setting, to share these feelings I was experiencing with others. “Midway” was born as a result and was first produced at the Triad in New York in June 2007.

A+C: Will you perform in traditional cabaret black attire at The Loop, or will you bring something different to the performance?

SHEEHAN: It will be a very special, personal performance experience. There are two sets to my show. The first set deals with re-awakening of forgotten or lost feelings; the second deals with longing for new experience and hope. I am wearing two of my grandmother Alice Russo’s classic dresses from the 1940’s and 1950’s as costumes, instead of simple black cocktail or concert-style attire. They will help to influence and enhance the mood and my performance in each set. Dressmaker Jon Ahrens from Customworks is remaking these vintage pieces for me with great care. It will be an honor to wear my grandmother’s dresses as she influenced my life so much.

A+C: What instruments will accompany you with “Midway”?

SHEEHAN: In addition to my musical director James McQuillen on piano, Julliard-trained professional musician Sarah Choi will accompany me on cello.

A+C: How do you want to impact your audience?

SHEEHAN: I want to speak to the heart of women who are often primary caregivers: I want to give both men and women an enjoyable entertainment as well as hope that the best in life is yet to come!

WaterTower Theatre’s Terry Martin sums up the ebullient Diana Sheehan best: “A phenomenal singer, an actress with a range we in Dallas have to yet to completely experience… a consummate pro, who is prepared and willing to fully collaborate from the beginning to end… she is one classy lady.” Diana Sheehan’s unique, elegant cabaret “Midway” graces the Stone Cottage Theatre in Addison, a special part of the 2012 Out of the Loop Festival. For tickets, visit www.watertowertheatre.org.