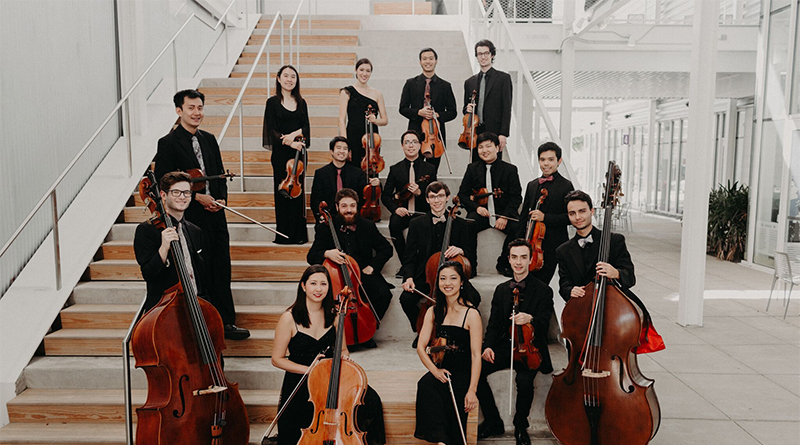 “Bodies in Motion” opens the Musiqa season with conductorless Kinetic Ensemble and Open Dance Project on Sept. 23 at the Hobby Center for the Performing Arts, Zilkha Hall. Photo by Jeff Gilmer.

Tony Brandt, co-founder and artistic director of Houston’s leading new music ensemble Musiqa, knows exactly what has driven its success for the last 15 years, and he is eager to double down on it. “Our starting point idea is that every concert would have some other modern art form integrated in the program. It is part of who we are and we need to showcase that even more powerfully.”

The 2017-2018 Musiqa season will do exactly that, extending the collaborative spirit to include the creative domains of dance, visual arts, drama, film, and poetry. Brandt envisions the ideal modern arts community as a healthy whole, sharing in the creative dream. “The modern arts have so much in common and yet it can be so fragmentary. We don’t see why folks who are interested in contemporary visual arts, dance and theater shouldn’t also want to hear what we are doing on a concert stage with music. Each concert is totally unique because every art form brings its own angle and shapes the evening in its own way.”

Pierre Jalbert’s String Theory will feature the full 16-piece string ensemble and the full company of dancers, and also incorporate the mathematically-inspired visual art of Houston artist HJ Bott, adding another layer to the creative whole. “Working with Annie is totally up our alley,” says Brandt. “Music and dance just fit together almost better than anything.” Arnoult is equally enthusiastic about the collaboration. She relishes the choreographic process and the experimental possibilities of each unique piece of music, whether it’s improvising for long hours in the sonic tapestry of Marcus Maroney’s Three Pieces for String Quartet or having extensive brainstorming sessions with her dancers on the scientific concepts behind String Theory. Quantum physics, space-time continuum, is anyone out there?

“Looking Back in Time” (Jan. 13) is centered around Brandt’s dramatic oratorio Maternity, commissioned and premiered by ROCO in 2012. Neuroscientist and author David Eagleman wrote the libretto, based on his short story “The Founding Mothers.” Leaping back through generations all the way to the single-cell organism, Maternity is a tribute to all the mothers who have made the human race possible. Dr. Eagleman, New York Times bestselling author and host of the popular PBS series “The Brain,” will be doing select readings from his fiction. Brandt and Eagleman will also be celebrating the publication of their collaborative book The Runaway Species: How Human Creativity Remakes the World, due for release this October.

Also on the concert are Pierre Jalbert’s Transcendental Windows, based on the Tiffany stained glass windows in an Albany church, and Karim Al-Zand’s Visions from Another World, inspired by the fanciful illustrations of J. J. Grandville. Houston’s rising new music ensemble Loop38, directed by Yvonne Chen and Jerry Hou, performs this ambitious program.

“The Moving Image” (March 3) will be a good old-fashioned Movie Night. Karim Al-Zand, one of the four composers leading Musiqa, came up with the idea of a “Music at the Movies” evening, where avant-garde films will be shown with live music. “We are going 100% in on this one,” Brandt beamed, “We want to rent a popcorn machine and do the whole nine yards. It’s going to be so much fun!” One of the features is “history of the world in seven acts,” a collaboration between composer Michael Gandolfi and computer animator Jonathan Bachrach. No spoilers. Let’s just say it’s not quite the images of world history one might expect.

“Playing Havoc” (April 13, 14) will be a homecoming for NYC-based composer/soprano Kate Soper, who studied composition with Brandt as an undergraduate student at Rice. She is a Pulitzer Prize finalist and co-director of the cutting-edge new music ensemble Wet Ink. Brandt is exceedingly proud of Soper’s success, “She’s created an authentic voice that is a wonderful mix of being extremely modern and yet you get what she’s trying to do. She’s the real deal.” Soper will be singing her own epic eight-movement work Voices from the Killing Jar, a wildly captivating piece inspired by several fictional women, among them Madame Bovary, Lady Macduff, and Daisy Buchanan, each trapped in her own form of a metaphorical killing jar, a tool used by entomologists to kill butterflies without harming their bodies. Soper’s own poems form the bulk of the libretto.

Outside the concert hall, Musiqa will take part in the annual Musical Ofrenda at the Lawndale Art Center, and continue its collaboration with the Contemporary Arts Museum Houston through the popular LOFT Concerts.