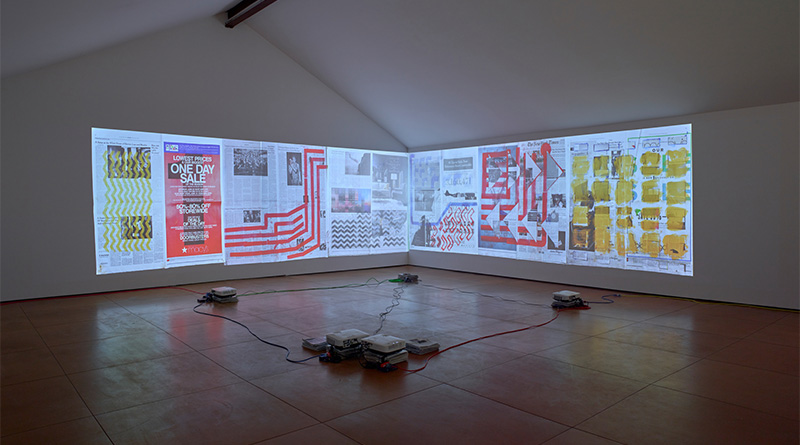 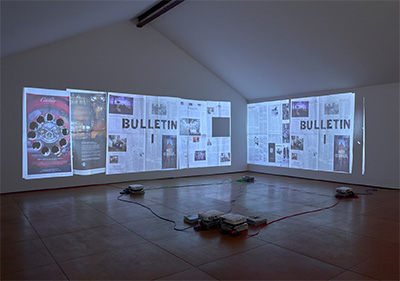 Drew Bacon is a painter and animator who returned to his home turf in Houston after graduating from Pratt Institute.   His second solo show, Bulletin I-IV, a large format animated 8-minute moving image that involves drawings on the New York Times captured as video using stop motion technique, on view at Hiram Butler Gallery through June 24th. A + C editor Nancy Wozny visited with Bacon on his new show, return to Houston and the pace of change.

I’m always slightly apologetic when a visual artist gets stuck chatting with a dance writer, but then I thought more about the body of work currently on view at Hiram Butler, and it’s all about momentum, speed and action. Talk about the shift from painting to animation.

I love the pacing and composition of dance, it makes me want to make moving pictures.  Dance is probably moving living sculpture, with a beautiful thread of cooperation and teamwork.

Dance is moving living sculpture! Thanks for saying that. Say more about motion.

At the end of my bachelor’s degree, I thought a great deal about the evolution of image making and image consumption. The way I had studied art (and still do) is by googling artist’s work and scrolling through 60-70 jpegs of an artist’s work to get a sense of the arc of their work.  This type of research really changed my relationship to painting. I began to think about art in the information age, and how images hold attention in sequence, in a scrolling format, rather than in singularity.  I came to animation through a search for a new way to practice painting values. Painting series of images in sequence and stringing them together as animation opened up my painting practice.  I also had a deep desire to paint movement and to compose temporally. 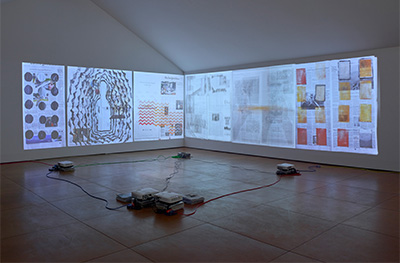 What drew you to using The New York Times as your canvas platform, background, base, drop curtain? Honestly, it seems to assume many roles. You both feature it boldly, then cover it up too. There’s a pulsing oscillation in this work.

After my first show, I thought about the obsolescence of different types of media. For a few years I worked on old dictionary pages, and I stayed infatuated with the dictionary as an object, and as a kind of molecular reference for decoding language. I build out a large animation desk to shoot on the New York Times. I was attracted to working with a media that is on the verge of obsolescence.  The newspaper is the older format of the news feed, a metronomic mega-narrative delivered and finalized a day at a time. There is an everything metaphor there that really held my practice during this project.

There’s definitely a now-ish feel to your work, and it goes beyond using the daily newspaper, it has to do with overload, and the speed of change. Agree?

I want to hear more about the paint part. It’s really flashy. Especially the red. Very mesmerizing, like getting a secret code in the newspaper.

I took a few different approaches to painting the paper, actually four, which later became the different sections of the film. In the first section there was no approach, I simply wanted to use up the paper, and figure out some of the possibility within the medium.  In the second section, I used stencils to re-print redactions of headlines back onto the paper.  The third section was a kind of mix, pulling more figurative reference out of the images.  And the fourth became the most abstract, with drawings of patterns over the paper. Throughout the process and all of the approaches, I always maintained the approach that the paper, through it’s own repetition of characters and average composition, is a shorthand for an indescribable mega-narrative, like a glyph or a codex.  As the internet and the pixel take over the delivery of information, print medias move closer to that type of nostalgic position.  I tried to establish and maintain that kind of relationship to the media throughout the project. 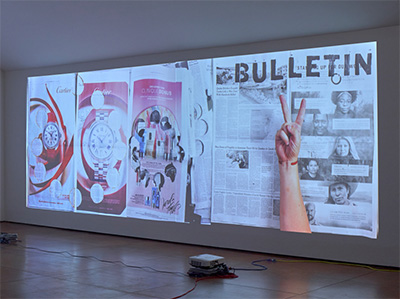 So I assume that you hung around in New York City after your stint at Pratt. What was the climate like for a young artist?

I was on a plane by the end of the week after graduating.

So no hanging around in NYC. Why?

New York City was a tough place to begin skinning your knees into adulthood.  “If you can make it here, you can make it anywhere. The island at the center of the world.” I really bought into all of that grandeur while I was there. Though that helped my work, It ended up totally exhausting me. It was also so easy to become spoiled in terms of stimulation, jaded. I left New York totally depleted, the environment had changed me deeply and I really needed to catch up with myself. I always had a hard time fitting in while trying to stick out and grow as an individual. There is a great deal I miss about New York, walkability and fashion mainly.

Every young artist should read what you just said. I understand that completely. We all have our own love/hate stories with the city. But hey, this is a Texas magazine, and at your opening you said, “I love Houston” and I am going to hold you to that. Why did you move back?

Growing up I was exposed to Houston’s a tremendous cultural capacity.  I had such a rich experience riding the bus around the city, skateboarding, meeting all sort of characters and exploring the urban jungle. That has always felt like a really important layer in my foundation.  Also, something in Houston lets me enjoy a great deal of solitude, while still being a part of a community.  You can find amazing sources of stimulation and inspiration, but you have to work for it, it’s not over done or in your face, which makes the rewards more rewarding.  We are a humble giant, an underdog to the major American cities, but without the complex. Houston’s character suits me, and I’ve always been passionate about our city. On some inner level, I knew that I would come back here to take part in building what we become. For better for worse, I love this city. 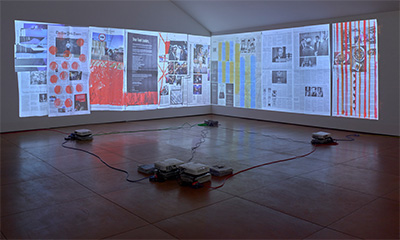 Did your work change?

I’ll say that living in Houston afforded me the opportunity and necessary artistic isolation to explore animation and let it become something, without trying to package it and show it so quickly.  Practicing art as a student is entirely different than being out in the world and trying to maintain a practice.  One of the beautiful things about art school is that your work is always in demand and there are always people to exchange feedback and critique with. This isn’t the case outside of school. I worked for about a year before reaching out and finding community.  I had a studio at Spring St. for a year or so, that I am pretty sure less than three other people came into during that duration. That is the place I began learning animation. Later, I moved to El Rincon Social, and developed a strong sense of peership with painters, photographers and sculptors my age.  I still spend a great deal of time with the friends I made there, but I have a studio with my uncle in a building near Box 13 Artspace.  Each of these spaces mark different eras of work. But solo practice vs. student practice is entirely different, I hope to be a student again one day, we’ll see.

Then you will belong in the story about people coming home and leaving again. But let’s talk about your first sold out show at Hiram Butler. Way to go. Not the usual path for a young artist.

It’s been great to work with Hiram and Josh, they are art world Jedi’s. Hiram’s gallery is a place where art is treated with the utmost respect and that is continually inspiring. 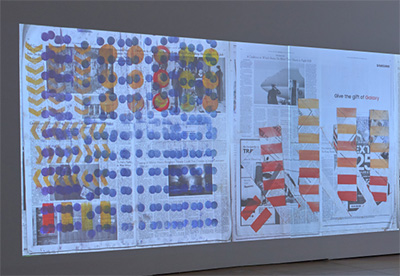 Not that an artist should be thinking about what comes next ten minutes after completing a large body of new work, but I will be curious to know what you will dream up next.  And in looking over your website, it seems you have set yourself on a path.

I have about 20 pounds of LIFE magazines from the 60’s purchased from ebay.  I’ve started the project and shelved it to look after my life a little bit before really going at it. I have an instagram for my studio (@drewbacon.studio) where I have a stream of pages from from a 1915 book called History of the World by JN Larned. I transfer print a kind of headline phrase from each page, back onto the page. I’m doing some painting and collage before taking on a film project.  Installation films or “cinematic sculptures” are long arcs, and low on instant gratification the work is never really finished until it is installed in a space, so I’m focusing on rounding out my practice with shorter projects that have discovery within shorter completions.  In the studio,  it’s important to create impossible tasks to ensure some growth and failure. On the other hand, it’s also important to create work that opens and closes quickly so that you remember how the process cycles and rewards. Balance, balance is what’s next.