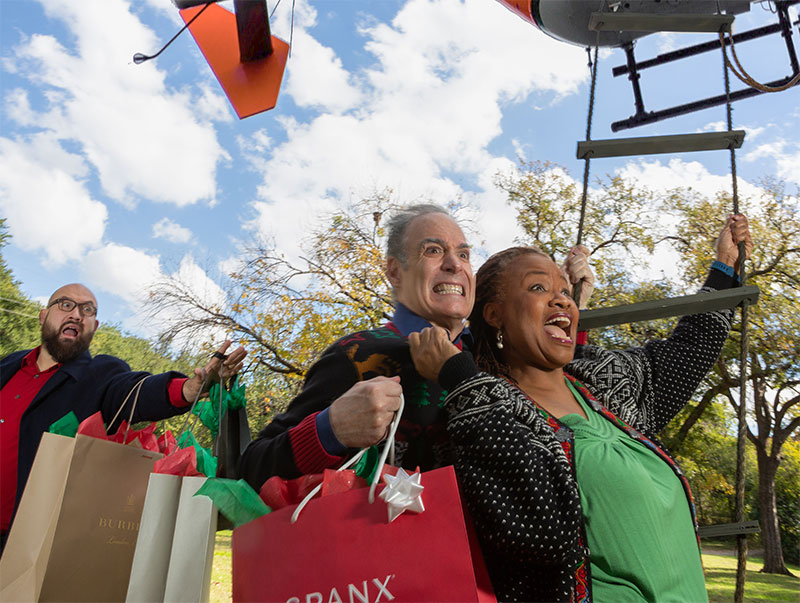 Community’s Mirror: Denise Lee writes a play for the people in Dallas

As an admired and award-winning singer and actor in the Dallas-Fort Worth area, Denise Lee is used to hearing accolades and raves. But as a black woman, she’s used to hearing “well-meaning” phrases that range from subtly racist to outright insulting.

“I have been collecting material my whole life from people who are trying to be endearing or ‘one of the good ones’ but not realizing how insensitive they were being,” says Lee. “A friend who’s a choir teacher at a prestigious private school in the area told me once that an older white woman came up to her after a concert to pay them compliment and then said, ‘funny, you don’t act like a Negro.’”

That’s now the title of Lee’s first play, which is having its world premiere at Theatre Three Feb. 20-March 15. The comedic drama is a series of vignettes about three families that explores the prejudgments we make on our neighbors, the biases we inadvertently pass on to our children, and how the simple act of talking to one another is being subverted by social media.

“I have been threatening to write this play for 15 years,” says Lee. “I joked about it to my friend [director, playwright, and costume designer] Bruce Coleman, and he said he’ll write the first song: ‘And Your Children Are So Clean!’”

Theatre Three’s artistic director, Jeffrey Schmidt, heard Lee’s joking during rehearsal two years ago and challenged her to actually write down her experiences. When he took charge of Theatre Three in late 2016, Schmidt made a public vow that he would focus on local talent and new work.

“As artistic director, the decision about what gets produced on T3’s stage ultimately is made by me,” he says. “There’s a long history of theaters whose staff and patrons are predominantly white producing the one ‘black’ play each season. While the intention might have been good, the problems this presented have become clear as the arts strive for more equity, diversity, and inclusion in everything they do (and not just once a year). So how do I, the middle-aged straight white guy, approach this? I can’t just say, ‘We’re gonna produce A Raisin the Sun!’ and call it done.”

In addition to performing, Lee hosts well-attended and award-winning gatherings called Community Conversations, which address hot-button topics in both society and the performing arts world. Topics of past conversations have included diversity and inclusion, the effect of social media, and perceptions of American history.

“For me, providing Denise Lee a platform to say what she wants to say and ask the questions she wants to ask is a step in the right direction,” says Schmidt. “Here’s a well-respected artist in the community who’s paid her dues and then some. ‘I’ve got a theater. You’ve got a play. We really enjoy working with each other. Let’s do this!’ Theatre Three’s mission is to nurture artists, authors, and audiences. I can’t think of a better way to fulfill this charge.”

Soon after Schmidt commissioned Lee, Dallas Theater Center’s playwright-in-residence Jonathan Norton came on board as her advisor and mentor.

“I never, ever thought about being a playwright,” admits Lee. “I’m not as concerned about critiques or if people like it—I have something I want to say and I hope people hear it. The play ties in so much with my Community Conversations. I want people to leave thinking, ‘huh, have I done or said that? Am I guilty of that?’”

Lee admits that it was difficult to actually sit down and write Funny, You Don’t Act Like a Negro, and that it was deadlines with Schmidt and her director, T3’s associate artistic director Christie Vela, that forced her creativity to begin flowing.

“When we did our first reading, I sat there cringing,” says Lee. “But it was so nice to hear the words out loud. I had to learn how to develop character by hearing things not in my own voice. One vignette is a dialogue between men, so I created a private room on Facebook with men I trusted, threw out a topic, and asked them to engage in one-upmanship, to express their superiority and intellectual nastiness. I wanted to hear in men’s voices how we talk to each other on social media.”

So does Lee plan to continue growing her new career as a playwright? Possibly, she says, but it’s never been her endgame.

“I’m happy on this new journey. I’ve been so blessed to have my first play produced within two years on a major stage,” she says. “I’m really just so grateful to Jeff for not only believing in and trusting me, but for really walking his talk about what he’s committed to doing with T3. He’s done it in a way that’s respectful to the theater’s memory but honors the people in this community and encourages the talent that is here. There are tons of helpful and honest resources here—everyone has offered to read and support. As someone who has been around a long time, it makes me feel so good. Now I guess I should finish writing the play and make it decent!”