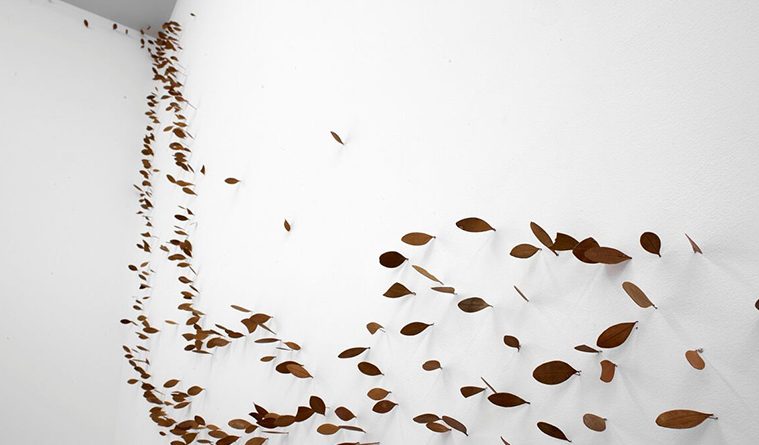 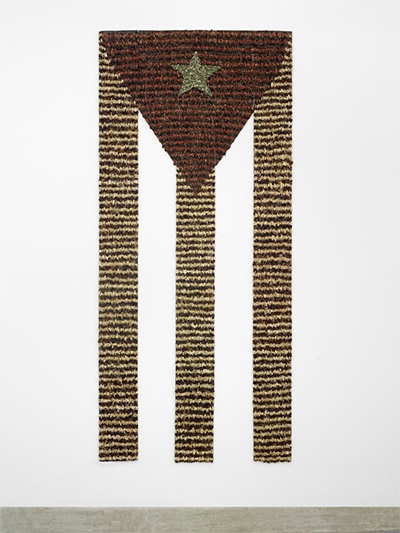 Since we live in the age of critique, it goes without saying that when it comes to art it is no longer sufficient for a work to be aesthetically pleasing; beauty must serve a more critical purpose. But what if a work’s “beauty” is derived wholly from its context? Is that object, although perhaps not as aesthetically pleasing as the word might imply, still beautiful?

That’s the thesis Mari Carmen Ramírez, Wortham Curator of Latin American Art and director of the International Center for the Arts of the Americas (ICAA), and Rachel Mohl, curatorial assistant of Latin American art at the MFAH seek to support, with varying success, in the work they’ve curated into the Museum of Fine Art Houston’s Contingent Beauty: Contemporary Art from Latin America; the idea that even if an object isn’t beautiful on the surface, the critical factors which shape most contemporary art, can still imbue an object with beauty.

Contingent Beauty is a wide-ranging exhibition of work by 21 established artists from Argentina, Brazil, Colombia, Cuba, Mexico and Venezuela, in a selection of, with few exceptions, dramatic and politically charged work from artists exploring historical issues both unique and shared among their home countries.

Upon entering the exhibition viewers (and listeners) are immediately met by the violent sounds of Mecha, a video work by Argentinian artist Miguel Ángel Rios in which Rios recreates and modernizes aspects of a popular ancient Colombian game called tejo. It’s a blisteringly loud film, full of material destruction, whose context is key to provoking a universal rethinking of the long-term consequences of destructive leisure activities.

Nearby and in stark contrast to the violence of Mecha, is Colombian-born Miguel Ángel Rojas’ Broadway, a trail of more than 3,000 coca leaves which overtly evokes the illegal drug trade which has wracked Colombia for decades with a delicate beauty which stands in opposition to the brutality of its reference. A fragility belying its powerful statement is also present in the space reserved for María Fernanda Cardosa’s Woven Water: Submarine Landscape. Cardosa’s hanging sculptures of delicately preserved starfish serve as a blunt critique of tourism’s poor stewardship of nature. 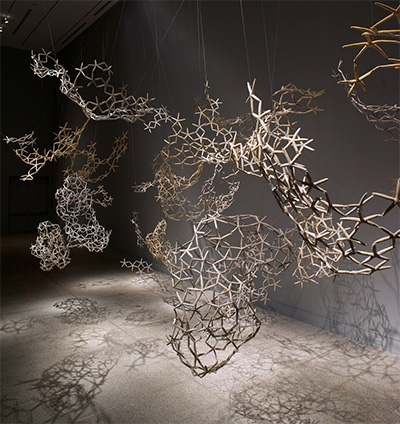 Cuban artists Tania Bruguera and Yoan Capote utilize found objects as well to illustrate, in their case, the paradox between the fragility of man as an individual and the resilience of man as a species. Bruguera spent years gathering the hair of friends and neighbors, while Capote did the same with human teeth; Bruguera created a Cuban flag and Capote created Stress, a difficult piece to encounter with its concrete mass threatening to crush the teeth upon which it sits.

Themes of fragility and futility abound in the show from Johanna Calle’s Obra Negra, drawings of Colombia’s precarious shantytowns, to Oscar Muñoz’s Editor Solitario and the holographic juxtaposition of cultural figures with victims of Colombian violence; whether present aesthetically or implied thematically, the fragility of both the physical being and of memory are recurring themes among the Latin American artists whose work is represented in Contingent Beauty.

That idea, that our experience of, and relationship with history is fragile, pervades the work of these artists who more often than not, are utilizing their work to remind the viewer of the difficulty countries for whom peace and stability are elusive have forging collective memory.

The MFAH has built one of the most comprehensive collections of modern Latin American art and Contingent Beauty is a show chock-full of extremely moving and powerful work. Beauty, however, seems fleeting if/when it is present in the works on view, and the curator’s attempt to push viewers towards a viewing of this work in search of that beauty seems to often stand in direct contrast to the artist’s intention.