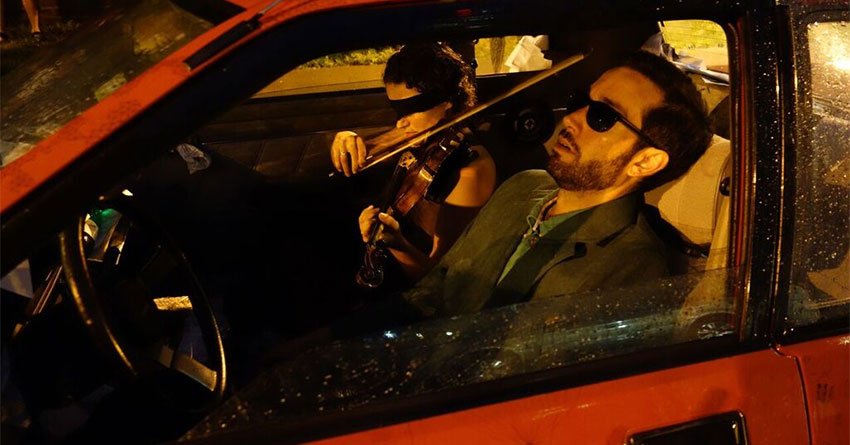 Some of Houston’s most curious contemporary artworks come courtesy of the Cynthia Woods Mitchell Center for the Arts at the University of Houston. Since 2003, whether on stage, at the park, in the streets, around campus, or somewhere unexpected, Mitchell Center artists engage the city, its residents and visitors like no other arts entity.

Whereas other performing art festivals might position audiences outside of the artwork—solely as viewers or spectators—CounterCurrent challenges would-be audiences to become participants, to interact directly with the artworks in real time, often reflecting back on the city and its communities. This year, a majority of the festival artworks are based in expanded narratives that rely on audience participation to help shape the story and fuel the experience.

For example, Ghana ThinkTank “gives any citizen in Houston a voice in the conversation,” explains Mitchell Center Program Manager Pia Agrawal. Winners of the 2013 Creative Capital Award for Emerging Fields, Ghana ThinkTank is a worldwide network with a mission to create strategies to solve local problems in “developed” countries. Organized by Christopher Robbins, John Ewing, and Carmen Montoya, the network collects problems in the U.S. and Europe and sends them to think tanks in “developing” countries to produce workable solutions and sometimes intensely awkward situations. By doing so, Ghana ThinkTank “reveals wide-ranging cultural assumptions that govern global interactions in our ever-shrinking world.”

For CounterCurrent, Agrawal explains that Ghana ThinkTank’s question of “What’s your Houston diversity problem?” stemmed from trying to identify and narrow the project’s focus. “We realized that really diving into what diversity means for this city covered a lot of ground and let people respond to the question, answering in so many different ways,” says Agrawal.

The project takes the form of a portable cart that travels to various neighborhoods during the festival, displaying answers and collecting more opinions. Conversations are inevitable, and rich, as people contribute their own perspectives and read those of their neighbors and other city residents. A collection of the “problems” are sent to a think tank in a different country that debates the issues and sends back solutions to be implemented.

Another roving CounterCurrent project is from Berlin-based collective Rimini Protokoll, a team of authors/directors whose productions exist in the realms of theater, sound, radio plays, film, and installation. Their CounterCurrent work, in partnership with the Alley Theatre, called Remote Houston, asks 50 people to don headphones and head out into various parts of the city. A computer-generated voice leads them through common yet often unseen areas: alleys, tunnels, hallways, backs of buildings. Soon, the cityscape turns into a personal film for each of the participants as they become aware that they are being observed even as they are observing and exploring their surroundings.

Another narrative project, Anthony Hawley’s Fault Diagnosis, is a five-night, multimedia event that follows the story of a stranded passenger, his car, and its repair manual. Incorporating performance, video projections, an app, and a 1985 Nissan Pulsar NX, Hawley asks us to look closer at how we behave when the systems around us start to fail, allowing for a larger exploration of the truths and non-truths that pervade our lives.

Some versions of the truth are influenced by what we actually see and what we tell ourselves we see. In a museum context, certain truths might be presented in the form of wall text or by a docent. This Page Left Intentionally Blank is a new take on the museum audio tour that subverts how visitors view art. Created by Big Dance Theater, Tei Blow, and Suzanne Bocanegra, CounterCurrent festival participants engage in a choreographed tour of The Menil Collection, allowing for new experiences and new viewings of the art and its contexts. And for an additional look at truth-telling, quite interestingly in the form of censorship, history, and contemporary life, the collective Slavs and Tatars present Molla Nasreddin: Embrace Your Antithesis, a “lecture-performance” at the Asia Society Texas Center.

“CounterCurrent 2016 projects represent the range of ways we view each other and the city. When I first moved to Houston, the thing that really got me excited was talking to someone who told me she had grown up in the city but still felt like she discovered new things every day,” says Agrawal. “I love finding that same feeling in some of the artworks we present. Remote Houston and Ghana ThinkTank are taking an interesting perspective— they aren’t artists coming in trying to change the city, or have you see the city in their eyes. They are trying to get you to see your own city in a new way,”

Unwilling to place limits on the CounterCurrent’s potential reach and impact, the Mitchell Center takes a long view of its audience. Artists, art enthusiasts, socio-political-minded folks, tech geeks, academics, students, faculty, staff, and passers-by only begin to identify the people who experience the festival. “We start with art and artists who reflect Houston’s diversity and interests,” says Farber. “Our artists are increasingly the festival’s best ambassadors, as well. They are out in communities engaging with people and connecting them to the work, which is far more substantive engagement than we could ever achieve with a website, a newspaper ad, or an email blast.”

With partners such as Asia Society Texas Center, Alley Theatre, Blaffer Art Museum, DiverseWorks, Mongoose versus Cobra and more, headquartered at MATCH, the reach of CounterCurrent may still be within art parameters, but it certainly casts a wide net. One challenge for CounterCurrent is how to bring the whole endeavor back home to the UH campus, perhaps their most immediate audience. Farber and her curatorial team recognize the faculty as the practicing professional artists that they are and think of the students as members of a diverse small city. She sees CounterCurrent as an opportunity to raise the visibility of the faculty artists (be sure to check out Hillerbrand + Magsamen’s Home Balance), and to ask them what other artists, visiting or local, either they or their students want to work with.

For example, Maya Zbib and Omar Abi Azar of Zoukak Theater Company developed Innocent Violence with UH students in drama therapy workshops, giving them theatrical tools of expression and providing a window into what students think. Innocent Violence is presented as part of the INTERSECTIONS initiative, a program of the Mitchell Center that “seeks to build bridges between visiting artists and Houston’s Muslim and non-Muslim residents, with a focus on the millennial population.”

And near to the UH campus is MacGregor park, where jazz pianist, composer, and bandleader Jason Moran presents “an all day music homecoming.” The event functions as the CounterCurrent closing party and is the first project in Performing the Neighborhood, a five-year partnership between the Mitchell Center and Project Row Houses. Together, they will commission and present major performance-based works by contemporary artists in Houston’s Third Ward.

Several more artworks, artists, and events comprise this year’s CounterCurrent. But one participant role that may not be explicitly named is that of technology. Instead of resisting its major influence on social interaction and cultural exchange, the festival takes tech by the reins and enables it to do what it does best: create possibilities where before there were none.

However, technology alone is unable to create possibilities. It’s the people behind the screen, the artists, who breathe life into the hardware and software. Whether through video projection, audio headphone tours, or app-based interactions, CounterCurrent creates space for numerous modes of communication to take place throughout the city of Houston.

Why is exploring, questioning, and reconsidering the city such an important part of this art festival? The answer is perhaps simpler than you might expect: to understand a place and its people. As exemplified in recent political spectacles, ignorance can find expression in speech, action, and proposals. One person can threaten to undo generations of progress, compromising future advancements and even benevolence. If we better understood, through seeing, hearing, feeling, the impact we can have on the people and places we call ours, might we go to greater lengths to ensure that impact is mutually beneficial? Might we more deeply consider and value the experiences of others?

From diversity to dancing, problems to performance, and numerous art-driven experiences in between, CounterCurrent puts the layered lives of the city on display, whether individual, communal, or architectural. It’s one of the rare opportunities Houstonians have to find their tribe of like-minded people who want to break out of the hum-drum cycle of daily life—to be surprised, allowing a shift in perspective on a place we think we know so well.