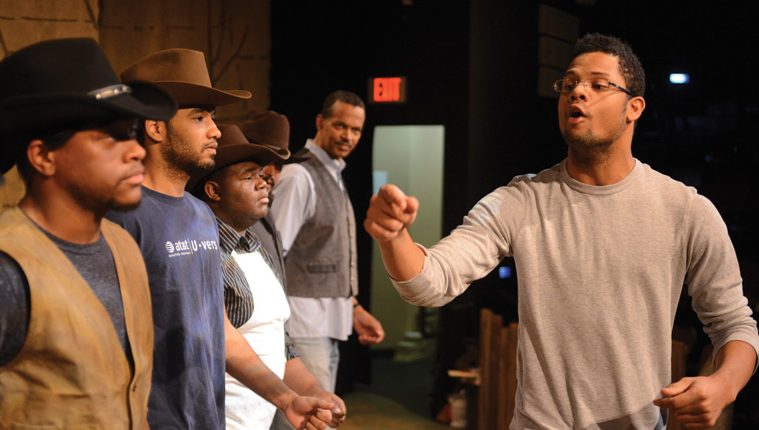 When Tre Garrett first came to Fort Worth in late 2010 to take over as artistic director of The Jubilee Theatre, he decided he needed to get to know more about the culture of Cowtown. He found the perfect opportunity in late January 2011 when he went to see the annual Cowboys of Color Rodeo.

Caught up in the excitement of the rodeo and astounded by how little most people know about the role African-Americans played in settling the West, Garrett started looking for plays about cowboys of color. When he couldn’t find any, he decided that was a void that needed to be filled.

“When people talk about ‘the Wild West,’ rarely are African-Americans included in the discussion. But they were there, living as independent people, making decisions and living their lives,” Garrett said. “The challenge of shaping the West was a challenge met by all kinds of people. It is American history, and no one people did it alone.

“African-Americans were part of that history, but there were no plays out there telling their stories,” he added. “So I thought, let’s create one!”

The result is Black Spurs, a “Wild West” musical that tells the story of Sam Pete, an African-American cowboy who sets out on one of the last trail rides on the Chisholm Trail from Texas to Dodge City, before the railroads replaced the trail rides, in an effort to make enough money to save his family’s farm.

The creative team at work.

The first step in filling the gap for Garrett was to find someone to write the story he wanted to tell. After talking to “a couple of playwrights,” Garrett said, he quickly decided he wanted to work with Celeste Bedford Walker, an award-winning playwright from his own hometown of Houston, who had a proven record with historical plays and who had her own very personal connection to cowboys of color.

“My dad was a cowboy,” Walker said in a recent telephone interview. “The history of African-American cowboys is something that has always just been understood in our family. But so many people don’t know anything about it. So telling this story is something I have always wanted to do. This is a real pinnacle for me.”

But just Garrett and Walker decided that just writing and staging a play about cowboys of color wasn’t enough. So they added an extra layer of difficulty by deciding to turn the project into a musical. That meant finding a lyricist to write the songs to go with Walker’s prose.

Walker suggested Ron Hasley, a Los Angeles-based lyricist she had worked with before – a suggestion Garrett agreed with, and with a grant in place from the National Endowment for the Arts to help cover the costs of the project, work began in earnest.

Walker was established as Jubilee Theatre’s playwright in residence for the year. And with only a “very short period of time” in which to get the play written and on stage, since the terms of the NEA grant called for the play to be staged during the 2012 calendar year, she started researching the history of cowboys of color. While writing historical plays is her forte, Walker and Garrett both knew this one had to be as accurate as possible.

“This is Cowtown!” Garrett declared. “You can’t get this stuff wrong here!”

Doing doing the research and “really getting into that world” of cowboys of color was nothing new for Walker. But collaborating with others on a project always ups the level of difficulty, and with Walker, Garrett and Hasley each in separate cities – Hasley in a separate state, even – that layer of difficulty got even thicker. In fact, Walker said, in the days before email, turning out such a complicated project in such a short period of time might even have been impossible.

“When I started out [as a playwright], everything was all done right there. It was all ‘homegrown.’ And still, as a writer, at least initially, I am in my own little cocoon. Initially, the writer is the director, the set designer, the actor – all of it,” Walker said. “I don’t do any holding back. I just put it all out there on the page, even ideas for songs in certain places, ideas for set design.

“I do that knowing that eventually I am going to have to cut back on the dialog to make room for the music,” she added. “But having it all out there initially helps give the composer an idea of what the music needs to be, where the songs need to go.”

Sooner or later, though, on a collaboration like Black Spurs, the writer has to put the work out there for the others to see, opening up the creative process to their input. And while that has its advantages and its disadvantages, Walker said, “on this project, it went very well, I think.”

She said, “I have gotten such wonderful feedback from Tre. He has such great visuals in his head and has given me wonderful suggestions on how to really make it all come alive visually. I really, really have enjoyed all the feedback. When you are working on a project like this, it can be very difficult if you have people who don’t really understand the creative process. But so far, everyone on this project has understood the process very well.”

With the cast chosen, Garrett presided over staged readings of Walker’s work, giving the actors – including Jubilee Theatre veteran Robert Rouse – the chance to give their input as well. But then came what was, for Garrett, the hardest part: cutting down Walker’s original work to a viable length for the stage.

“We started with a 200-something-page play and had to cut it down to 80-something pages to make room for the songs,” he said. “It’s like making sausage: It’s an ugly process, but you end up with something delicious.”

Black Spurs opened in preview on Nov. 24 and runs in full performance through Dec. 30.

“It has been a struggle to get it where we want it to be,” Garrett said before the first preview, and he acknowledged that the work is not yet perfected. But that, too, he said, is all part of the creative process.

“This won’t be a perfect piece [on stage at Jubilee Theatre]. We have no illusions about it being perfect this time,” Garrett said. “But we created something amazing in a very short time, and we will celebrate that it happened at all.

“It’s not perfect now, but it will be,” he continued. “This is something that will live in the world now. It will grow and improve. This play is still a baby; it is our baby. And the potential for growth is amazing.”