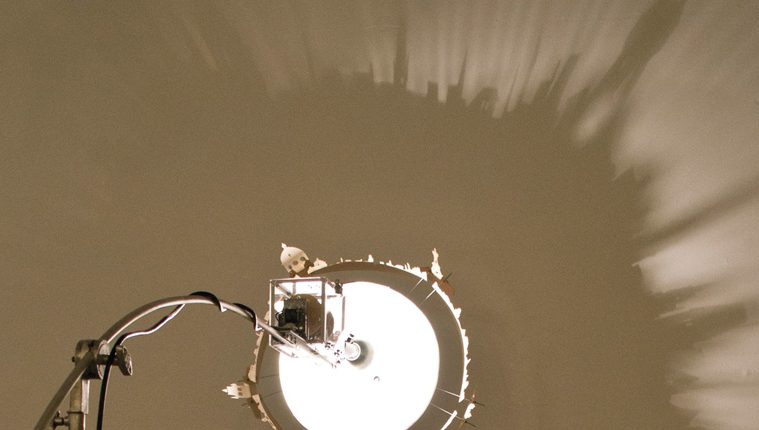 If there’s anything Dallas born sculptor Kit Reisch loves, it’s a challenge. Whether it’s living abroad or offering gallery-goers a provocative multimedia experience, he’s a man on an international mission to transcend personal and artistic boundaries. The Texas State University graduate has been teaching English in the Czech Republic and attending the artist-in-residence program at the MeetFactory, Prague’s international center of contemporary art, since 2010. In 2011, he traveled to Seoul, South Korea for three months to complete a commissioned kinetic sculpture for the Haeinsa Buddhist Temple. And as far as he’s concerned, that’s only the beginning.

Arts+Culture recently caught up with the globe-trotting Reisch to talk to him about his award-winning work. His exhibition “Sublimation Simulacrum” is now on exhibition at the Cohn Drennan Contemporary until February 11.

A+C: How did your interest in creating mixed media pieces develop?

REISCH: When i was studying art [as a college student], i was lucky enough to have a variety of teachers. So i pursued a variety of different artistic interests [including] painting and drawing and sculpture. And it seemed that sculpture was [the best] catch-all for all my different interests.

A+C:   What do count as your most significant influences?

REISCH:  From an early age, i had a fairly strict upbringing. i went to an all-boys Catholic school, taught by Cistercian monks in Irving, [which] instilled a reverence in me for work and all the things that means. And the most recent [influence] would be my experience abroad in Prague and Korea. if you’re in a place you definitely can’t help but be influenced by it: nothing is really made in a vacuum.

A+C:  How have your stays abroad impacted the way you work?

REISCH:  The experience of being taken out of my comfort zone voluntarily when i went to the Czech republic for the first time helped me to see basic things in a very different light. When i first got the studio in prague, [for example], i had a real struggle getting materials. So i really had to adapt. [but] i think it’s a healthy exercise for an artist to break out of what they’re comfortable with: maybe simplify some things, [return] to the ideas and go from there.

A+C:  Through those limitations, you’re forced to be more creative. What is the aesthetic value of the motion that is part of so many of your installations?

REISCH:  [it provides a starting point for] a dialogue between the viewer and the artwork. motion very immediately conveys a sense of life and of living things. And motion in general allows for a very quick and interesting response to come from the viewer. i think it’s just that sense of life that all living things have.

A+C:  How do you understand the relationship between art and technology?

REISCH:  I think that the dividing line between those two historically disparate fields isn’t really there anymore. There’s a real beauty in machines and utilitarian objects. [And] I think it’s exciting from the point of view of an artist because you see technology as a material. Once you become proficient with it, then [technology] really just becomes fodder for art.

A+C:  An undercurrent of humor exists in all your sculptures, even those that deal with difficult themes like isolation. could you elaborate on this?

REISCH:  Play and experimentation may seem a funny way of approaching tough themes like isolation or loneliness. [but they do let me depict] that feeling of being a foreigner and all of what that means. being between the two extremes [of humor an darkness] also allows the viewer to make more associations.

A+C:  What statement about modernity and modern life do you believe that your work makes?

REISCH:  kinetic work is directly related to modernity and the age of social networks and Twitter and 24-hour news and all these things that we are bombarded with. So when a piece is doing its own thing — being repetitive, making its own noise and being its own living thing — i like that the work can do that and [that] we can then move on and turn our attention elsewhere.

A+C:  What do you hope that your viewers will take away from viewing your objects?

REISCH:  On a baseline level, i hope that people will give [them] enough time and enough attention that will allow for some sort of dialogue. Even if a piece is particularly challenging or not really approachable to some viewers, I hope that people can least value a different perspective. Or at least have some sort of an interesting experience with these objects. it’s not so hard to do that when you approach them with an open mind and you give the work enough attention.