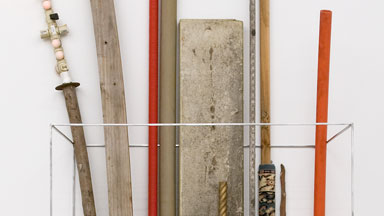 Creature Comforts, Indoors and Out

Andy Coolquitt has a steadfast interest in domestic spaces. So much so that the Austin-based artist, who has a solo exhibition opening soon at the Blaffer Art Museum at the University of Houston (May 18-August 24), literally lives his philosophies surrounding notions of comfort, domesticity and interior architecture.

This is reflected in his home, which he conceived of as part of his thesis project for the University of Texas at Austin back in the 1990s and where, for nearly two decades, he has continued to live and work. A multi-structure communal space, it consists of a shared central kitchen, an art studio, and private buildings along the perimeter where seven people currently live.

Parts of the home are decorated with found, repurposed things and care has also been taken with the interior design. Furniture arrangements can be seen as studies in psychology, inspired by small acts that Coolquitt witnessed: the conversational way that chairs were left positioned after a party; the organic pathway that a dog took through the home. In fact, Coolquitt considers the continued creation of the home’s interior to be a performative action and the place itself an official work of art, simply titled A House.

Coolquitt’s sculptural work similarly centers on domestic preoccupations, although here he more obviously engages with the history of found art and the readymade, finding inspiration in improvised “furniture” and other homey things that people — often the homeless and/or crack users — have patched together and left outdoors in public spaces.

Sixty of his discrete sculptures and tableaux, made between 2006 and 2012, will be on view in Houston as part of his first solo museum exhibition, arranged by the Blaffer and presented there following the show’s first run at the AMOA-Arthouse in Austin.

Claudia Schmuckli, director and chief curator at the Blaffer, described Andy Coolquitt as a comprehensive exhibition in the sense that it surveys what is available of Coolquitt’s work, explaining that many earlier creations were ephemeral in nature and no longer physically exist. A full-color monograph, co-published by Blaffer Art Museum and University of Texas Press, gives a complete overview of the artist’s practice.

The works that will be on view are created from a plethora of collected materials. Leaning against gallery walls will be gritty and colorful pipes which the artist found and altered only by cutting and rearranging. Some sculptures feature tubing and light bulbs; others use discarded lighters.

The collection of the lighters reveals some of the artist’s process. Coolquitt first picked them up off the ground casually, following a party at his house, and then began noticing them everywhere and collecting them more intensively, even altering his commute via foot or bike throughout the city to places where he was seeing them more —eventually discovering sites where homeless people lived or where people had been smoking crack. At these places, Coolquitt was fascinated by the ways that people created home-like comfort outdoors, from cardboard used as seating to avoid the wet ground and milk crates arranged chair-like under the protective canopy of a tree to the makeshift storage solution of a sleeping bag stuffed in a tube. Quick snapshots of these sites can be found on his website, www.Coolquitt.com, under the link for “ccCraaCkK.” The allure of these scenarios seems to have translated into other Coolquitt artworks.

Within the exhibition, Schmuckli described arranged accumulations of objects as three-dimensional tableaux, stating that these “often allude to conditions of homelessness but also create situations of interiority … reconfigured into groupings that imply a sense of domesticity, sometimes through association, sometimes through actual function such as providing light and warmth.”

“It seems like the social and the personal are always linked,” Coolquitt said in an email. “A House best illustrated this idea. It presented all these contradictions between my individuality and the social space it was providing … I was very interested in confusing assumptions of public and private, of experimenting with this idea of community comfort … For a guy growing up in the wide open spaces of Texas, with an out- weighted notion of comfort through isolation, the conflict was a natural part of that world … Maybe this will begin to explain my obsession with the relationship between the discrete object and the environment … how it’s always such a delicate balance. There’s a sculpture, and then there’s something next to it … and that something gets sucked into the world of the sculpture, or vice versa.”

Given Coolquitt’s fascination with the little design solutions that organically unfold both inside and outside the home, and the connection between art and environment, it is no wonder that Coolquitt seizes on the installation of his solo exhibition as a chance to forge a relationship between his sculptures and the gallery space.

In the Austin version of the show, for instance, a moveable wall allowed him to create an “alley” that invoked the place where he found his art materials and, through the use of the narrow display space, forced visitors to closely encounter the artworks housed there. The 60 works in Houston will be uniquely reconfigured — there won’t be an alley — but viewers can expect drastic divergences in the concentration of artworks, with some areas very densely populated and others quite open.

In addition to the works that make up the official checklist, the artist will also add objects to the display that he has termed “somebody-mades” and “in-betweens” — the former being unaltered found objects and the latter merely art material, such as a pipe, that has potential to turn into an artwork or to be left as-is.

The addition of these objects may clue the audience in to the context in which the finished sculptures were created; specifically, that these museum-quality works are made from cast-offs that Coolquitt found in the street or purchased from unglamorous places like eBay or the Salvation Army. These additions also play with the notion of museum spaces as revered places where rubbish is discarded and the intended is curated in, instead evoking a studio environment where art co-exists with an artist’s cherished junk.

— DANA MATTICE
Dana Mattice is a writer and artist who lived in Houston for seven years and continues the love affair from the wilds of Northern Minnesota.