Money and the instruments used to make it always feel a bit like sleight-of-hand to me—a trick that certain practitioners have honed to mystify us rubes. Some people feel the same about art itself, as though attaching monetary value to a piece of cloth stained with pigment is any weirder than assigning purchasing power to a piece of green paper. We like money because it feels like a protection against the ugly realities of not having it, and we despise it because it feels so divorced from our human needs and experiences. But to appreciate art, we have to be able to separate it from money. To feel something human, we must tell ourselves that capital is none of our business. Ghanaian art superstar Amoako Boafo has had the kind of beginning to his career that makes this kind of mental separation necessary, lest understanding get lost in a swirl of zeroes. Amoako Boafo: Soul of Black Folks, curated by Larry Ossei-Mensah, seeks to separate Boafo’s work from its relationship to capital and establish it in the conversation of art and artists, where it belongs. These paintings (and their magic) are very much in the realm of the real.

Amoako Boafo: Soul of Black Folks was first exhibited at San Francisco’s moAD and has now traveled to the Contemporary Art Museum Houston, on view May 27 through Oct. 2. You can catch up on the tornadic market activity around Boafo’s work elsewhere, Ossei-Mensah wants to leave it to the viewers to make up their mind on value. “The public hasn’t been afforded that opportunity,” he states. “We’ve been friends for the last several years,” he says. It was time for an “institutional conversation around the work.”

In the move from moAD to the CAMH  the show has “expanded from 18 to over 30 works,” a collection of the expressive portraits Boafo has become famous for. Each figure sits within an austere background, gazing outward toward the viewer. Boafo’s method of rendering skin is the most distinctive feature of his work. With gloved fingers he lays down complex hues of red, blue, and purple to describe deep skin tones. His figures stare back at the viewer: powerful, serene, relaxed.

­­­
Portraiture is an intimate art form and Boafo’s tactile method further decreases the distance between sitter and artist. He feels their bodies into existence. Ossei-Mensah thinks the opportunity to view this work in a museum setting will give viewers the chance to “think about humanity. Think about themselves, think about where the black body sits within the canonical conversation.”

Additionally, the friends, acquaintances, and family members that are the artist’s subject impart their own mark on the work through bold fashion choices, patterns and color. They assert themselves as subjects. “Fashion is a big part—it’s part of articulating images that are devoid of the white gaze,” Ossei-Mensah explains. The importance Boafo places on fashion was recognized in that field of visual expression as well. In 2020 Boafo collaborated with Dior on a collection of garments based on his paintings. 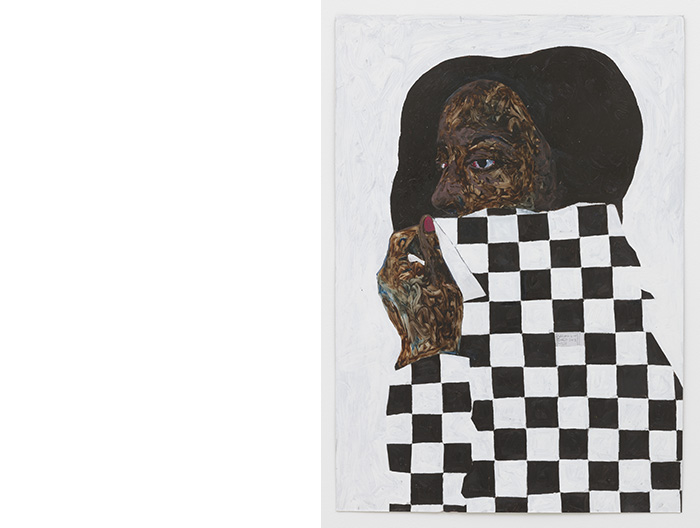 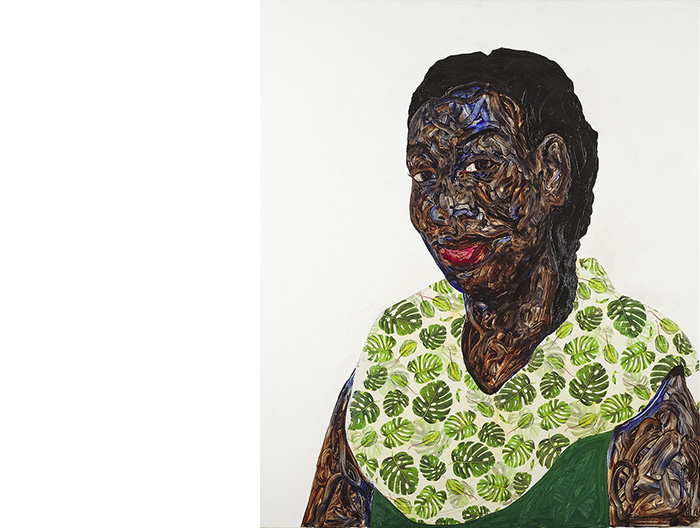 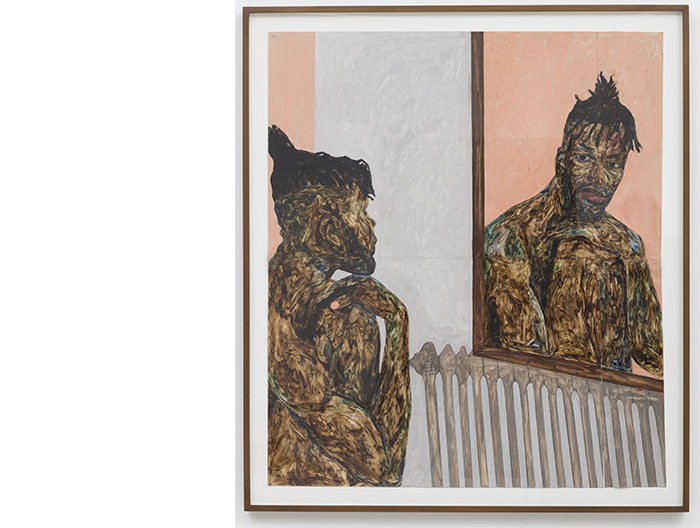 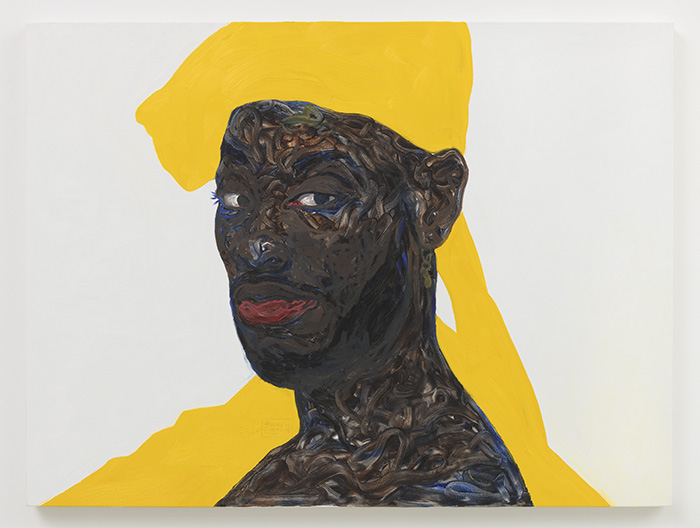 This cross pollination between fine art and pop culture mean Boafo’s work will be familiar to the eyes of the younger, and culturally fluent art viewers that the CAMH is cultivating as its audience. In recent years their programming has spoken directly to a subset of art viewers that seek to define Houston both to the uninitiated and to Houstonians themselves as a town sprawling in population and land area but thrumming with originality—especially from its generations of black, brown, and immigrant communities. Ossei-Mensah says bringing these highly physical works to the viewers, “That’s important to both of us. You really can stimulate dialogue. There’s so much texture, the composition is way more enticing.” He thinks the works will speak to “a multitude of people young or old-whether they’re an artist or not.”

Both Ossei-Mensah and Boafo traveled to Houston in the planning phase of the exhibition, to decide if it was the right locale for such a defining show for the artist. Ossei-Mensah says, “Houston [is an] interesting intersection and cultural meeting point. It’s not just Texas, it’s an amalgamation of the region.” He mentions the importance of Rick Lowe and Project Row Houses, as well as the deep imprint of the Menil and iconic James Terrell works. “[Boafo] is someone who responds to the space,” Ossei-Mensah explains. A major feature of the show will be a wall-filling mural. “If you want to see this mural you have to come to Houston. It’s an ephemeral piece.” 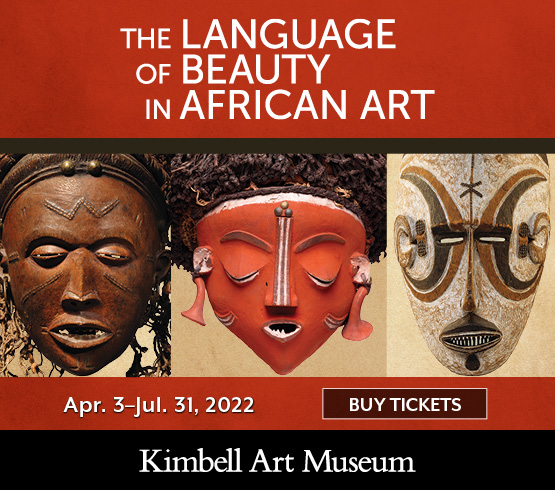 Another draw was Houston’s reputation as “a music town.” Boafo responds to the “emotive quality of the music,” and that can mean a surprising range of influences. The pair collaborated in January to curate an exhibition at Marienne Boesky based on an ABBA song. Ossei-Mensah explains, “sonically, what he is listening to.” Music is “important to self-presentation and self-preservation.”

For Boafo, part of this self-preservation has been establishing his studio in Ghana, a feat made possible by the interconnectedness of the art world through Instagram and other digital modes of communication. Ossei-Mensah says, “for me it’s a fantastic tool. It helps level the playing field. It creates another sense of access.” This widening of our field of artistic vision is part of what makes it possible for Boafo “to be able to be in Accra and make work,” he says. “It’s a testament to how things have shifted.” However, “it’s not the main way art should be seen.” After all, what Boafo is offering is nothing less than a glimpse at the soul, a substance that can’t be captured or quantified, and that he describes with the simplest and most profound of tools—his own hands.