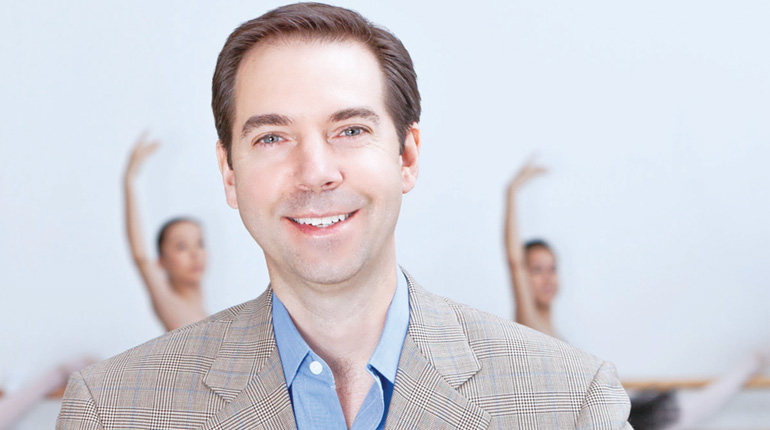 In February of 2012, James Nelson took over the reigns of the executive director job from C.C. Conner. Nelson, a former Houston Ballet dancer, was groomed for the job during his 12-year tenure as general manager.  Even though his office has just moved down the hall, more than his view has changed.

He spoke with A + C editor Nancy Wozny to bring us into the thick of running the nation’s fourth largest ballet company.

A + C: What’s the one thing that is the most different about your new job?

Jim Nelson: Time. I spend more hours here, but I knew that. So much of this job is relationship building. That takes time. It’s all good.

A + C: You have been involved in so many aspects of the organization already. What’s new for you now?

JN: The board development piece is really new to me. I was involved before, but not completely responsible. Now, I’m learning how all of that works and am extremely involved with our board chair and president. It’s been great, but new.

A + C:  I saw Joffrey: Mavericks of American Dance recently and left thinking that being the executive director of a ballet company is one really hard job.  Yet, you always have this beaming smile on your face. What’s your secret?

JN: It’s about the team you cultivate. You are the architect, but not the sole person running the ship. I absolutely take a team approach. It’s also about leveraging the great talents of people around me. That’s what makes us successful.

A + C:  Houston Ballet Center for Dance is a little over a year old. Has the company’s reputation changed nationally?

JN: Absolutely, yes, we have had fantastic coverage nationally and internationally. The building has won several awards, including an American Institute for Architects and a Houston Business Journal Landmark Award. So yes, we have raised the profile of the organization, but a building does not make a ballet company. It’s the fantastic artists who are the heart and soul of this company. Without that, we are nothing.

JN: The building has validated what we have been saying for years, that we are world class, and now we are packaged in a world-class building.

A + C:  How does your former life as a ballet dancer inform you now?

JN: I understand the crazy structure of ballet companies, which are led by two people, an artistic director and an executive director. I also have credibility with Stanton Welch (artistic director) and the artists because I’m from their world. We speak the same language.

A + C:  Ben Stevenson’s dramatic Romeo & Juliet ends the season. Any special thoughts on this ballet?

JN: Well, I danced Tybalt and Lord Capulet in Ben’s version.  Prokofiev’s score is one of the best ballet scores ever, and the music is simply beautiful. The pas de deux are great, you get drama, sword fighting, it’s just a dream of a narrative ballet. The ballet stands the test of time. I believe Stanton will take it on during this next decade. It’s on his shortlist.

A + C:  Nicolo Fonte just premiered a stunning new ballet. How do you see new work as key to Houston Ballet’s mission?

JN: It’s always a priority for this company, and it will continue to be. We are committed to making a contribution to the art form. We want to have new work along with terrific contemporary work and the classics. That’s how we attract the great artists who come here as well.

JN: Our enrollment has grown 20% since we opened the new building.  We are built for growth, close to the Metro, and are much more accessible to a diverse community.

A + C:  It seems to me that more and more company dancers are Academy trained. True?

JN: Recently, we have had several dancers rise through the Academy to the company. It doesn’t happen every year.  Right now, 49% of the company has spent some time at the Academy. The important thing is that the talent we are seeing coming out of the Academy is better than what we are finding at auditions. It’s not that we are preferential, they are better.

A + C:  What’s your biggest challenge for the next decade?

JN: We are half way through a $95 million capital campaign. The building was the first milestone. We are just shy of raising all of the money for the building, but still have a ways to go on the endowment portion of the campaign. That has to take priority in my focus for the foreseeable future.

A + C: What do you do when you take a break from ballet?

JN: I cook, garden, and travel, usually during the summers when there isn’t any ballet going on. I’ll make an exception this summer when I head to Jacob’s Pillow Dance Festival to see Stanton’s world premiere on the Joffrey Ballet. Will you be there?

A + C:  Of course I will be there. Don’t forget it was at the Pillow that I first spied you in a bow tie and a seersucker (C.C.’s signature outfit) last summer. If you had to name one gift from your predecessor, what would it be?

JN: I would say that C.C. has given me a prism for my toolkit that gives me a way of viewing the landscape of the business of dance.