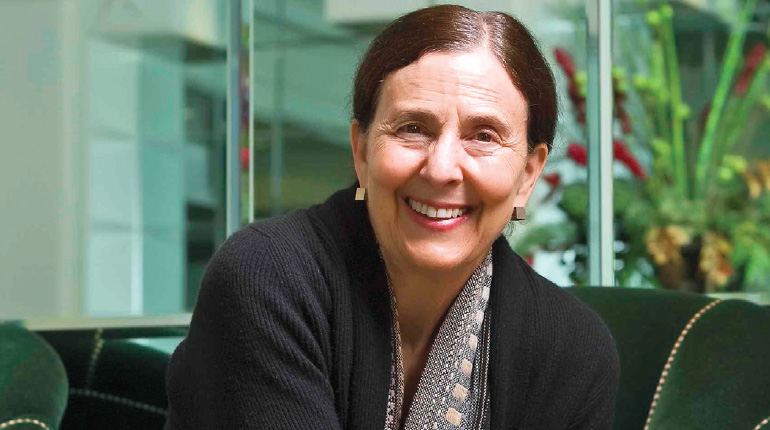 NOW ON HER 17TH SEASON, find AND her 20th if you count the work she did in Brussels, find Belgium, Dance Salad Festival director Nancy Henderek is a cultural ambassador on the international stage.

Every Spring, Houston dance audiences look forward to the tremendous variety of companies, choreographers and dancers the Festival offers. Whether it’s figuring out Visa snags or taking an hour long piece into a festival format, Henderek has been a doing it with her fearless passion for the art form.

This year, Dance Salad Festival (DSF), on April 5–7, promises eight companies from around the globe, including several U. S. premieres.

Henderek took a break from her busy dance day to visit with A+C editor Nancy Wozny.

A+C: After nearly two decades, what would you say you have learned about presenting international dance in Houston?

NANCY HENDEREK: We have a multicultural and multi-lingual arts community who enjoys opening up to new ideas for all kinds of art. DSF has been a part of that influence. There are over 80 different consuls representing different countries in the world in Houston. Mix these communities with our multiethnic, cultural, and local international traditions, and we have a natural audience mix for international dance.

A+C:  How has your curatorial eye changed over the years? Do you find yourself being drawn to a certain kind of work one year, and another for the next?

NANCY HENDEREK:  I’m always interested to see how choreographers translate their ideas into dance by reflecting what is unique in their own cultural references and how they touch universal concepts. Most of all, I want to feel that the choreographer has spoken directly to the dancers performing the piece and to the public watching it.

A+C:  You actually shape the excerpt of the work we see. Is there one example in the program where you worked closely with the choreographer to excerpt a piece for this program. Can you talk about that process?

NANCY HENDEREK:  Sometimes, full evening works will be reduced to two or three sections to give the public the flavor of the full evening work. In essence, Houston sees dances that will never be presented this way again. With Pal Frenak’s “Seven,” I did what I normally do with the curation process: I write out notes of the piece, starting from the beginning and going to the end, making descriptive and timing notes of each section. After that, I look for how to weave certain sections together to make a shorter version. Then, I send my curated notes and ideas of what I think will work, to the choreographer. This is basically a kind of temporary editing. Then, there follows a discussion whether it’s possible to do the piece this way in DSF. At the end of the day, it’s their work that is presented, even in a newly mixed form.

A+C:  I saw Christian Spuck’s hilarious “Le Grand Pas de Deux” on film at the Dance Salad opening event two years ago. A ballerina with a pocket book? Very funny. And we simply don’t laugh enough in ballet, so I’m thrilled to see this piece on stage. This is a double coup for DSF, to bring the Stuttgart Ballet here and this piece. How did that come about?

NANCY HENDEREK:  I saw “Le Grand Pas de Deux” in a Montreal Gala performance years ago. I knew I wanted it for DSF some day. Finally it worked out, and with the original dancers from Stuttgart Ballet for this year. Christian says this is the best cast of this piece.

A+C:  Quasar Compania de Danca was a break out hit when they were here in 2003 and 2004. We don’t think about contemporary dance in Brazil until we see this company. Can you tell me how you discovered this troupe?

NANCY HENDEREK:  I first saw Quasar in Austin. I just loved them and choreographer/director Henrique Rodovalho’s work, and knew they should come to DSF. The last time I saw them was in the final Pina Bausch Festival in Germany. She loved this group, too. They will be bringing in their hit “Mulheres/Women” with the Red Couch that I know many will remember and two other U.S. premiers, curated for our festival format. There’s also a reaching back in history in the program with Roland Petit Le Jeune Homme et la Mort (“The Young Man and Death”), performed by English National Ballet’s Jia Zhang and Yonah Acosta (Carlos Acosta’s nephew.)

A+C:  What made you want to include some vintage dance in the program? And do tell, Is Yonah as exciting as Carlos?

NANCY HENDEREK:  “Le Jeune Homme et la Mort” shows drama, conflict, and the human dilemma of the pangs of love by a young man intoxicated by a femme fatale. Historically, this piece was a rite of passage for the major artists of it’s time: Nureyev, Baryshnikov (seen in the beginning of the movie, “White Nights”), Paris Opera stars and also Ivan Vasiliev from the current Bolshoi. Last Fall, English National Ballet (ENB) presented a whole evening of Roland Petit, including this piece, in honor of this French choreographer; he picked the cast and two weeks before the premiere, he died. The performances became his memorial. For ENB, he didn’t pick already proven stars, he picked Jia and Yonah, young stars in the making. Carlos never danced this part, and I’m sure he is having fun watching his nephew in this role.

A+C:  How fluid is the program? Do you go down to the wire on who and what is coming?

NANCY HENDEREK:  The fluidity of the choices is part of what I must expect and be ready to quickly act on. I can’t be caught in mourning for a piece. I always have to be reality oriented, even with the tension of change. Change is part of the universe. Any advice for first time Festival goers? If you want to see every piece, come Thursday and Friday, or Friday and Saturday. And, enjoy the show.