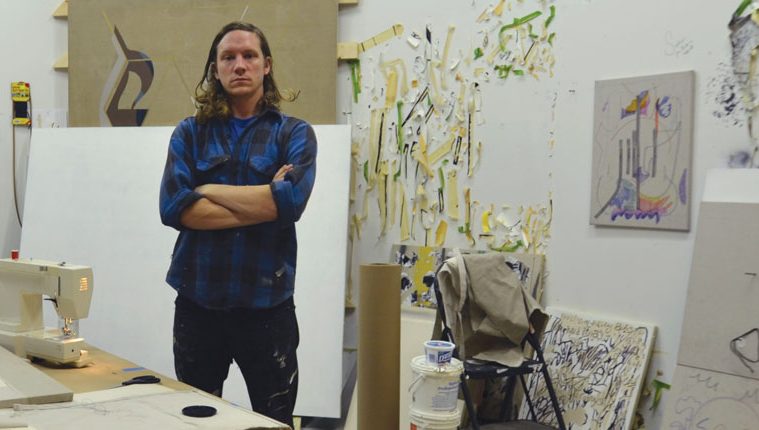 In preparation for his upcoming exhibition at Dallas’ Circuit 12 Contemporary, no rx arts writer Robin Dluzen recently visited the studio painter Ron Ewert, viagra one of the four Chicago-based artists who will be presenting their work in White Noise this November at the Dallas gallery. Though the young painter may have only received his MFA in May of this year, it’s no surprise that Ewert’s cerebral approach to the genre of painting puts his (and his colleague Josh Reames’) work on par with the work of Andrew Falkowski and Adam Scott, Ewert’s former professors. As a group, the artists contend with the notion of contemporary culture and our inundation of its data, though Ewert’s focus retains a particular attention to painting as a platform and a filter for deciphering these visual deluges. Though Ewert seems to have no particular love affair with paint as a material, the artist possesses the unceasing attention to — or perhaps the nagging curse of — painting art history.

A+C: Your upcoming show, White Noise, deals with data and culture, and there is a definite element of cultural critique to be found in the work of Andrew Falkowski and Adam Scott. Do you see your work as a critique of culture as well, or is it something else?

Ron Ewert: I think that all of us, including Josh Reames, are very skeptical of the culture we have been given and participate in, but this is just an element of our work. There is also a respect for history, specifically the history of painting, its traditional philosophical power, and its ability to change. My work specifically questions the current state of informational equivalence, the reduced power of singular images, and the consequent contingency of meaning, resulting in an ambivalence that I try to render or give a visual form.  More Jasper Johns than James Rosenquist.

A+C: Your process often starts with found material sourced from the internet, collaged and manipulated in Photoshop before being projected onto the canvas for painting. What role does the painting process play in interpreting your content?

RE:  The physical form an image takes is equally as important to me as what is or is not represented in an image. The haptic qualities of painting and its support tie into a history that is part of the content of the piece. With the works for this show, I am trying to create monoliths to the states of ambivalence I mentioned earlier, images that are opaque, that don’t immerse the viewer, that are difficult to enter like a picture, but rather trace like a map or experience like an object. The marks, imagery, and assumptions should all be familiar and produce associations, but not index any one thing in particular. They come from a position where most everything is appropriated, rehashed.

A+C: Your work incorporates so many different mediums, from paint to collaged materials to actual objects, but from our studio visit, what stood out more than that is the variation in aesthetic or style — particularly amongst the loose hand of Rollerblade, the immediacy of the line drawing in Leo, and the hard-edged geometry of DK. To what degree do you think or not think about style in your work?

RE: I am very concerned with the aesthetic constellation my work is situated within; stylistic modes, manners of making, and artistic branding are just a component of something I consider a larger riddle to which I apply my practice. Shifting between media and manner is a conscious strategy I have used for several years. It is a way for me to dissociate myself and my audience, as well as evade definition and hopefully focus the attention, both mine and that of a viewer, on a real analysis of a given work and its concrete situational qualities, including its beauty and semiotic gaps. It is a way of working that is negative and focuses on difference, association and language. That being said, the removal of self from the work is an impossible task, and a deeper continuity can easily be seen with a wider view. Personally, for me this impulse comes from television, changing channels, as well as Bob Dylan, Gerhard Richter, Sigmar Polke and famous comedic actors who do serious roles, Jim Carrey, Bill Murray, and more recently Louis C.K. Currently I am still fascinated by the works of Charline Von Heyl, Albert Oehlen, Amanda Ross-Ho, Tyson Reeder, Sarah Morris and Heimo Zobernig, to name a few big ones.

A+C: You find parallels between art history, specifically painting history, and internet culture, and talk about the differences between “wading” and “scuba diving” when it comes to both. Can you speak to how these notions get incorporated into your works?

RE: I’m not a very good swimmer and I tend to experience the most transformational, radical or bizarre ideas in film, music, theory and visual art. The deep sea trenches would be programming, hyper-fetishized or brutal content, and trolling archives of medieval court documents. I’m living in the liminal area of the beach and the chest deep waters of CNN, Wikipedia, ESPN, Google image search, contemporary art daily, street signs, generally surface information, and dominant ideologies. The painting “Wading” that will be in the show is simply a screenshot from a Google image search for “brick pattern” that is distorted and then enlarged and faithfully reproduced on a very nice white canvas. There is no “experimentation” or play that is happening physically with paint; the playfulness is in the idea and virtual processes.

Ron Ewert received his MFA in 2012 from the School of the Art Institute of Chicago. His work has been featured in such venues as the Chicago Cultural Center, the Union League Club of Chicago, Andrew Rafacz Gallery in Chicago, and Milwaukee’s Green Gallery. White Noise opens November 23, 2012 at Circuit 12 Contemporary in Dallas.