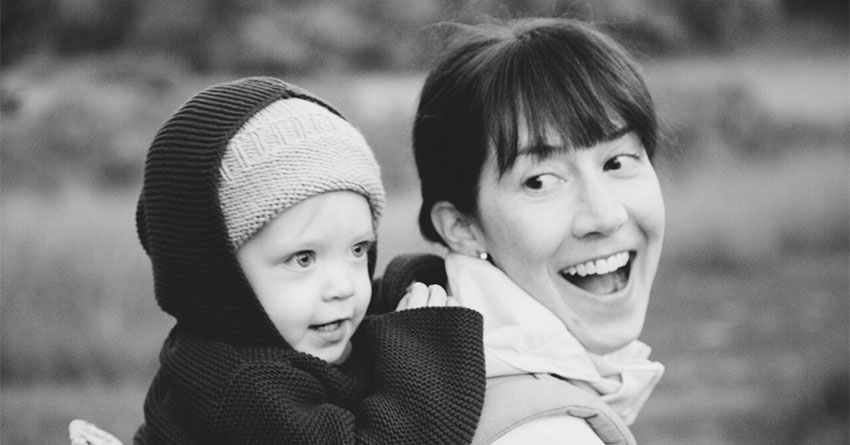 On any given weekend in Dallas, there are a slew of art openings. But curator and mother Danielle Avram has to make time to roll on the floor with her three-year-old daughter, give her a bath, and tuck her in before even thinking about a babysitter.  Such is the life for Avram, an emerging curator and 2015 Pollock Curatorial Fellow at SMU. Avram documents her experience in both roles on social media through the hashtag #curatormomlife.

“I started it early as a joke, because they were such disparate parts of my life, trying to write while I’m playing with my daughter. As I’ve grown in my curatorial role and my daughter has aged, I’ve started to learn how to merge the two lifestyles.”

When Ella was born balancing the two lifestyles was a difficult task. “I thought about giving it up altogether,” she mentions, referring to a period earlier last year when, frustrated and out of work, she almost gave up on a career in the arts.

Avram, who is from Regina, Saskatchewen, Canada, moved to Dallas in 1997 where she graduated from UT Dallas on a full academic scholarship. She went on to the School of the Museum of Fine Arts at Tufts University where she found her calling as a curator.

In graduate school Avram founded a gallery for SMFA student shows, curating seven shows over a three-year period before she left Boston to work as a Curatorial Assistant at the High Museum of Art in Atlanta.

When Avram returned to Dallas in 2011 she worked at The Power Station, where she carved out a name for herself by curating experimental shows, working in film and collaborating with other artists in the city at a time when the community was beginning to experience a burst of growth in scale and scope.

“I suppose it felt like the power structure was shifting a bit in favor of younger artists and curators.  More and more artists were opting to attend local universities and then stay put, giving way to a homegrown art scene. OFG.XXX, CentralTrak and The Reading Room, as well as The Power Station brought people to Exposition Park and made small, offbeat spaces a viable option ushering in a DIY movement. It started to feel like Dallas was connecting to art scenes in other cities on a base level rather than just on an institutional or collector level.”

Towards the end of her tenure at Power Station her life changed in another way: her daughter Ella was born eight-weeks premature. It was an experience that put Avram through the ringer. She stayed by her daughter’s side during the entire process, exhausting herself to save the most precious part of her life. It was a time of change, heartache, misery, insignificance; Avram says the experience changed her life.

“I had to slowly crawl back and reassemble a career. I told myself, ‘I don’t have to divide who I am, or my enthusiasm.’ This is my life.”

Avram’s philosophy on curating is decided. “I like to have a relationship with the artist I work with. There are some people who have works you unpack and hang on the wall, but with the artists I work with they have to understand the nuances of the show. They might be pushed to do something they might not be used to doing. As a curator, you’re not just a benign vehicle for an artist’s work to get filtered through. It’s your job to see what they’re doing and think about how it could be worked upon for your audience, your space and to challenge your artist so they’re not doing the same thing over and over. Then they do the same in return. That back and forth is super important,” she says, “I want to be a champion for other people more than a champion for myself.”

Avram exists behind the scenes as well, assisting the careers of those in whom she believes. One of those artists is filmmaker and video artist Michael Morris, who Avram has collaborated with on numerous occasions, they co-curated Four Nights, Four Decades (2012) at the Power Station and worked together on the Dallas Medianale, an experimental film festival. Late last year, as part of her fellowship at Pollock Gallery, Avram collaborated with Morris again, this time on conceptualizing the ideas and framework for what would become her first show for the space, A – Z: Abracadabra to Zombies,which investigated the intersection between art, technology, and the phantasmagoria.

Avram says all her shows begin with “a latent interest.” For “A-Z” the concept came from her history with photography, which played a heavy part in both material and context, as well as an early fascination with the unexplainable. “I try to let curating a show be very stream-of-consciousness, I let it percolate and go and go and go until it feels like something I can latch on to, even if I don’t know everything that it is.”

Lorem Ipsum, a show she curated at the Pollock Gallery in November of 2015, was an experimental show which concentrated on the role of the curator, concept, and placement. “I started off thinking of it as an artist exchange,” she says, continuing her philosophy of a team-oriented approach by collaborating with other curators of various backgrounds to attack and dismantle notions of curatorial practice using a variety of works from 19 artists.

“I think curating people is as valuable a process of a show as curating the objects themselves. I’m a curator, but I really consider myself a project manager, because I manage people. One of the absolute joys of my job is putting together a team of people where I can trust each person implicitly to shine in their role. I don’t want to oversee every detail. Anyone who does this understands it’s a social practice.”

Avram’s curatorial residency at Pollock Gallery extends until March. Next up she is writing an essay for a publication that will accompany, Not Photography,an exhibition opening at Erin Cluley Gallery in February.  She also plans on revisiting the concept behind “A-Z” as a larger research and writing project. As Avram’s curatorial career evolves, so will her role as mother, something she finds just as fascinating.

“In a lot of ways, #curatormomlife is about me discovering my own ‘mommyhood’ in my curatorial work, however that manifests. Becoming a mom has allowed me to have the confidence to not shut that off in either direction. I don’t have to turn off mom when I’m at work, or curator when I’m at home. I’m both, and I’m super proud of both.”