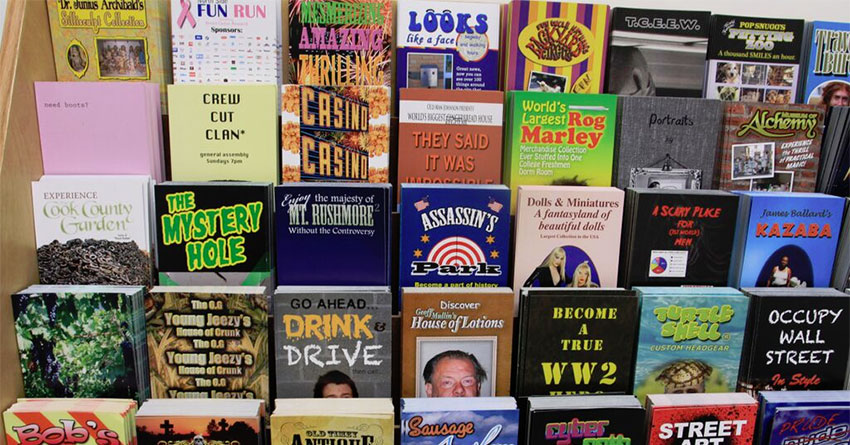 Okay Mountain, Detail of brochure from Roadside Attractions, 2012.
Purchased with funds provided by The Mark and Hilarie Moore Family Trust in memory of Timothy A. Fallon, 2014.

More about Curating in Texas

Austin is suffering from an identity crisis with the influx of thousands of new residents that threatens the city’s sense of weird. This concern is real: The ever-changing list of artists, gallerists, museum directors, critics, and curators forces the community to remake itself every few years. Yet, with the formation of The Contemporary Austin and new leadership at the Blanton Museum of Art and Harry Ransom Center, the museums in Austin are setting deeper roots. The stability of these large institutions plays a substantial part in supporting the community by providing entry-level jobs with growth opportunities and by recruiting mid- and high-level professionals that act as mentors and role models.

Though what is happening in Austin differs from activity in our sister cities, there is a common thread throughout the state. From Marfa to the I-35 corridor, Texas museums have brought on strong female curators to lead our institutions. Veronica Roberts joined the Blanton Museum as Curator of Modern and Contemporary Art in 2013 after working with UT’s Landmarks program to bring a Sol LeWitt wall drawing to campus.

“I was really stuck by how much potential there was here and how thwarted that’s been over the years—how tricky it has been,” says Roberts. “The institutions have had high points and real low points, they’ve got complex histories. I felt like there was a hunger when I got here—in New York, you don’t feel a hunger for your job at MoMA, people aren’t like ‘Oh, thank God you are at MoMA, now the arts will thrive.’ I felt there was an opportunity here, that people were hungry for institutions to be producing important exhibitions, engaging the community—that this be a town that is known for its visual arts.”

Roberts fits into Austin in an uncanny way. She grew up in San Francisco, and though we hate to admit it, Texans and Californians are similar—state-pride, a sense of large scale, and something else indescribable: An openness to the traveler, a generosity, or maybe a knowledge that many of us are not native—that we all ended up here searching for something. “I’ve never met people so friendly—hands down. And I think it’s a Texas thing,” says Roberts. “People would engage me in conversation and they wouldn’t be looking over my shoulder trying to see who was behind me. And it wasn’t just people who wanted something from me.”

A mixture of factors led Roberts to curatorial aspirations. Her grandmother, a docent at Stanford Art Museum for 35 years, brought her into the museum fold. A high school trip to LACMA and works by Félix González-Torres swept her off her feet. While an undergrad at Williams College, the most popular courses were Art History 101 and 102. Roberts found herself in New York City after college and completing her M.A. in Art and Architecture at U.C. Santa Barbara; she scraped together research, writing jobs, and teaching jobs, and lived with roommates. (At one apartment she was the unlucky one sleeping in the living room.) Eventually, she landed a job as curatorial assistant at MoMA.

“I’m a resilient person, and have always felt conviction about the museum path, but I do remember a low point at MoMA when I wondered how I could stay in the field in New York and continue to grow professionally,” describes Roberts. “I decided to leave in 2010 before I knew what my next step was. I was working so hard, I needed to take a break in order to have the head space to come up with my next move.”

Austin was an unknown, but Roberts was ready for the risk and the opportunities unique to the Blanton. “Growing up, I knew who Richard Diebenkorn, Joan Brown, and Wayne Thiebaud were, because they were front and center in the museum that I went to and because they were important artists internationally but were also from the area so they were celebrated there,” says Roberts. “I was thinking, who are the artists now, mid career and young artists from Texas?—like Okay Mountain. Donald Moffett was one of the artists I prioritized. I wanted to have some of the tough work, some of the socially engaged part of his practice. We would love to do more [collection building like] that.”

In addition to the acquisition of work by artists with Texas ties, she pays attention to the museum’s audience. “A lot of our visitors are new to museums. Research has shown that people are more comfortable with figurative art than with abstract initially—of course that can change over time—when I learned that and looked at the collection, it was almost all abstract painting, and I thought we might be alienating, there need to be more entry points,” says Roberts. “So one of the things I did was bring in compelling figurative work….amazing paintings by Vincent Valdez, for example.”

Roberts continues to contribute to Austin’s art community. She recently curated an exhibition at testsite featuring work by Lenka Clayton and is busy orchestrating Ellsworth Kelly’s Austin installation on campus. “I think [Austin] will be a really joyful space. This will be a space that slows people down. This will be a joyful place—we need a little joy in our lives.”