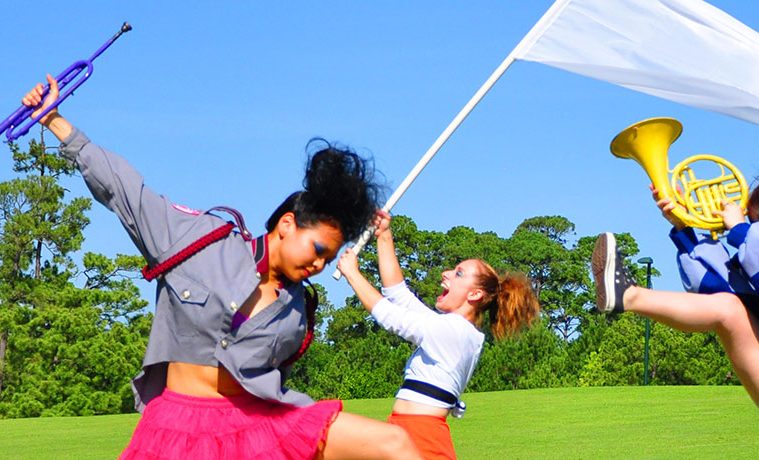 Dance Month at the Kaplan Theatre

Dance Month at the Kaplan Theatre is aptly named – it’s an entire month of dance works, choreographers, master teachers, companies and dancers. 2014 marks its thirty-fourth year, and though it may not seem like a milestone, it also happens to be the first year without one of its most prominent supporters, Betty Morgan.  Morgan passed away on September 9, 2013, leaving a dance legacy of assisting generations of choreographers to produce work on the Kaplan stage.

I remember Morgan as a woman in the audience, year after year, taking the time to thank each choreographer for their work.  When I presented Mockingbird in 2004 for Choreographers X 6, she responded, “I enjoy your honesty and perception of your childhood.”  Alongside Maxine Silberstein, who has spearheaded Dance Month since its inception, Morgan helped put Dance Month on the Houston map.  “She was the Volunteer of the Century, from the Children’s Performing Arts Series and Dance Month, to the Children’s Museum and KUHF,” remarks Silberstein, “She was also my close friend.”  Together, Silberstein and Morgan established a yearly affair where dance lovers could participate in up to seven events, all in one month.  Upcoming and established choreographers, pre-professional and professional companies, classes and workshops, and national talent imported from all over the world have become the trademarks of Dance Month at the Kaplan Theatre.

In memory of Betty Morgan, Ella and Dr. Arthur Hamberger are sponsoring the Saturday evening performance of Choreographers X 6, which will include a tribute to Morgan at the beginning of the concert. This year’s Dance Month is Jan. 25, 2014 at 8:00 PM and Jan.26, 2014 at 3:00 PM.  Both shows will also have a dance-for-camera pre-show, titled Motion Captured, Dance on Film.

Showcases are known for giving new talent a chance to produce works while not having the burden of producing a whole concert.  Over the years, many Houston choreographers and dancers have performed in Choreographers X 6, and gone on to notable careers.  I have choreographed and performed in Choreographers X 6, and having performed in many showcases, I found Dance Month to be unique in that it caters to not only Houston dance lovers, but also to its own following cultivated from JCC members.  This older, educated audience allowed me to push myself and create a work with more psychological depth that also appealed to non-dancers.

I also found that not only does Dance Month provide the theater, lighting, and marketing, it also provides a much-needed stipend to the artists.  A retired dancer herself, Silberstein is aware that even though the artists are not paying for the concert expenses, they still have to pay for costumes, dancers and rehearsal space.  A stipend helps cover those costs so that all artists, regardless of financial ability, have a chance to produce work.

Choreographers X 6 also has a long history of picking tomorrow’s talent.  Last year featured Laura Gutierrez, who is one of Dance Magazine’s 25 to Watch for 2014. Gutierrez was a featured soloist for Psophonia Dance Company’s The Long Hallway at Weekend of Texas Contemporary Dance at Miller Outdoor Theatre in 2011. Since then, I’ve seen Gutierrez performing her own choreography in an exquisite solo at Freneticore’s Fringe Festival.

Silberstein notes, “For a few years it appeared there was not a need for a showcase featuring six people – there were few new choreographers and the addition of other showcases around town helped to get new works produced.  So we replaced Choreographers X 6 with Triple Focus.  This year the committee reevaluated the dance community needs, saw many budding artists and a cut back in showcases, and felt like it was time to bring back Choreographers X 6.”

Choreographers X 6 is curated by a panel that is committed to diversity in the program, both in genre and people.  The result is an eclectic showcase of contemporary works ranging from ballet to hip hop from new choreographers to established favorites. This year is no exception. The concert features Rebekah Chappell, Randall Flinn, Ashley Horn, Kristina Koutsoudas, Cori Miller, and Heather Nabors.  As usual, I’m excited to see familiar faces as well as new ones.  Randall Flinn has been choreographing and producing contemporary ballet and modern works both locally and nationally for over 20 years.  I have always loved Flinn’s soul-searching works set on top-level technique dancers.  I’m also a huge fan of Kristina Koutsoudas, arguably the best local teacher and dancer of contemporary and folkloric dances of the Middle East and North Africa. (I got to work with Koutsoudas on Sara Draper’s Al Alundalus in 2007 – these dances are not easy, even for a professional dancer.) Ashley Horn is a prominent Houston dancer moving into the choreographic realm and is most known for her dance-for-camera work Wanderland. Rebekah Chappell and Cori Miller are relatively new to Houston, both having moved from out of state a few years ago, who have popped up in various companies and performances.  Though I am familiar with and acquaintances with Chappell, Horn, and Miller, I have not seen much of their own work an am excited to see fresh choreography. The last is Heather Nabors, the Assistant Director of Dance Programs at Rice University and Artistic Director of Rice Dance Theater.  I have yet to meet Nabors or see her work, so perhaps this is the most exciting work – the unknown – that I am anticipating.

As if these six people were not reason enough to attend, this year’s Dance Month has a bonus preview.  Last year in response to the growing genre of dance for camera works, Silberstein created Motion Captured, Dance on Film, a showing of dance works created exclusively for video.  The response was positive – people found it interesting and did not realize that there were works being created for film.  Because it is still a relatively new field, Silberstein is hoping to grow this audience this year by showing Motion Captured as a pre-show event with wine and hor d’oeuvres before Choreographers X 6. “By placing it as a pre-show, people who are interested in this genre can see these works without having to pay for another ticket and come out an extra night,” comments Silberstein, “We hope to get more people interested this way.  It’s another way for artists to explore their creativity and these works need a venue.” This year includes works by Karen Stokes (Houston), Amy Morrow (Austin), Marta Renzi (New York), Tamir Eting (Israel) and Ashley Horn (Houston). The added bonus for me is that I dance with Karen Stokes Dance. So not only do I get to watch fellow dancers, companies, and new faces, I get to watch the company I dance with – for free.

Other events include the Tirkedu Houston! workshop on January 10-12.  Tirkedu Houston! is a weekend of Israeli dancing led by Israeli teacher, Yaron Carmel. Carmel has taught Israeli folk dance both in Israel, and the United States. The weekend will include an Erev-Shabbat get together, teaching sessions for intermediate to advanced dancers with reviews at the end of each session, and a Saturday night dance party.  Dance Month also presents Four in the Mix, a concert featuring four Houston pre- professional dance groups on February 1, 2014 at 8pm.  This year’s companies are Dance of Asian America, Houston Ballet Academy Level 8, Urban Souls Dance Company 2, and Inertia Dance Company.

For professional dancers, Dance Month at the Kaplan Theatre includes two master classes at affordable prices in conjunction with the Society for Performing arts – SPA at the ‘J’.  This year Dance Month will host a Pilobolus Master Class on Thursday, January 9, 2014, 7:30 – 9pm and a Mark Morris Dance Group Modern Master Class and Audition on Thursday, January 30, 2014, 7:30 – 9pm.

For me, Dance Month is an excellent way to jumpstart my new year – it always invigorates me to see new ideas and fresh talent.  As a choreographer, it’s a great time to sit back, enjoy the show, and steal some moves.

–TONI VALLE
Toni Valle is a choreographer, production consultant, and performer.  She is the company manager and member of Karen Stokes Dance and on the dance faculty at University of Houston School of Theatre & Dance.  She is also the artistic director of 6’.