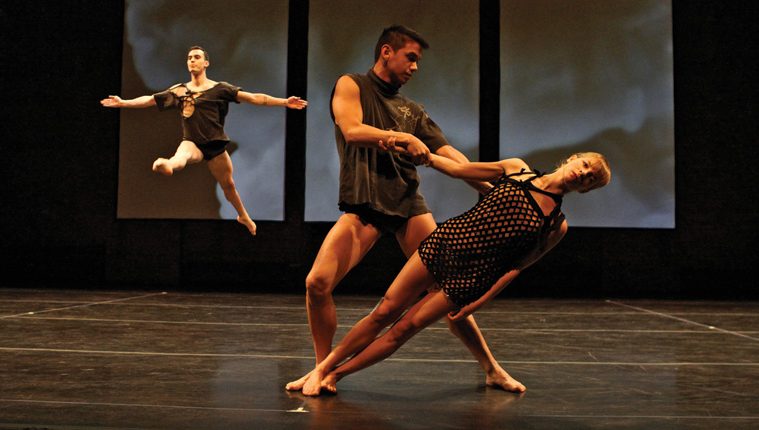 Dancing at the Edge of the World

“We conjure worlds out of nothing,” wrote Stephen Petronio in his essay “Why I Dance” in Dance Magazine. And what a world the New York choreographer has conjured in Underland, making its Houston premiere on January 11, 2013 through the Society for the Performing Arts.

Petronio originally set Underland on the Sydney Dance Company in 2003. They didn’t give him much time to set the piece. When asked what would get him there on short notice, he responded, “Get me Nick Cave.”

And they did. Underland is set to the Aussie Gothic rocker’s most iconic songs. Together, with Petronio’s highly visceral choreography, they create a kinetic landscape of a world in disaster. “It’s definitely a world below the surface of the rational and outside of the rules,” says Petronio about his post -apocalyptic piece. “Nick’s music is about darkness and light, good and evil. These are outlaw songs. And the dance came from the music, which is unusual for me.”

Stephen Petronio Company is in its 28th season. The company has performed in 25 countries with commissions from San Francisco Performances, The Joyce Theater, UCSB Arts & Lectures, Wexner Center for the Arts, Walker Art Center, and White Bird, along with numerous commissions in Europe. Among the upper echelon of mid-career artists, Petronio is on the upswing. He is the first participant in a new artist-in-residence program designed to help choreographers at the Joyce Theater. The choreographer is completely committed to the company model. “I am totally adamant that a company can function in the right circumstances,” he insists. “No one said it was going to be easy.”

Nor was it easy selecting the songs for Underland when Cave gave him full access to his entire canon. “I asked everyone for their favorite songs,” he says. “I listened a lot, and eventually came up with an arc that would work for the piece.”

Petronio is known for his high profile collaborators, which have included such legends as Rufus Wainwright, Cindy Sherman, Laurie Anderson and others.  Ken Tabachnick created the visual design, and Mike Daly the video component, to build a physical world based on the four elements.  Scenes of destruction, from fire and explosions, match the ferocity of the dancing.

In Petronio’s world, the dancing is fierce. Even the word “athletic” doesn’t suffice when describing his style. “Force, strength and power,” says the choreographer when talking about the visceral potency of his work. “I want my dancers’ technique to be invisible, so we have an intelligent body acting intuitively in disorienting situations.” Petronio agrees that his work asks a lot of his dancers. The sheer velocity of Underland’s movement vocabulary is a sight to behold. Dancers propel themselves through the air as if from an outside force. So it goes on planet Petronio.

Underland has quickly assumed the role of one of Petronio’s favorite works. “I love that I get to introduce a new generation to Nick Cave’s work,” says Petronio. “Nick did not use temporal themes. The world is still at war, and issues of mortality are still with us.”

Underland actually ends on a hopeful note with the dancers dressed in white, while Cave bellows  “Death is not the end.”