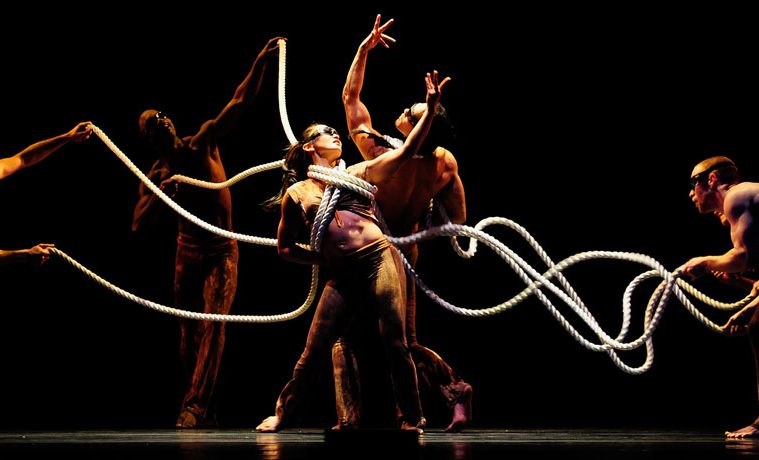 IMAGE ABOVE: Pilobolus in Licks. Photo by Grant Halverson. 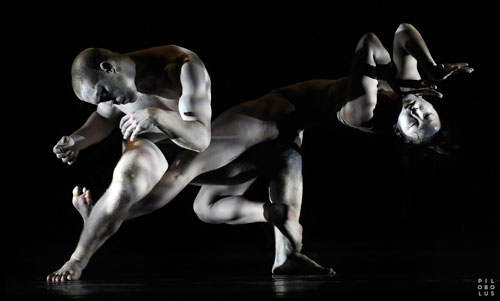 Thrills! Danger! Dancing ropes! No, it’s not this year’s holiday blockbuster movie; it’s Pilobolus. Even if you don’t know this inventive dance company by name, you’ve probably seen them on the Academy Awards or in car commercials, and they’re bringing their inventive movement shows to no fewer than four Texas cities this coming January.

On Jan. 10, the Society for the Performing Arts presents the company in Houston, and the next night, Jan. 11, they’ll be at the Paramount Theatre in Austin. ARTS San Antonio presents them on Jan. 14 before they head north for a two-night stand in Dallas, Jan. 17 and 18, presented by TITAS.

Pilobolus Dance Theater, named for a phototropic fungus, was founded in 1971 by the late Jonathan Wolken. Known for their athletic daring, inventive choreography, and playful nature, Pilobolus has become one of the more popular dance companies in the world. Over the last four decades, they have created well over 100 dance pieces, often in collaboration with other artists, both within and outside the dance world.

One thing to know about a Pilobolus tour is that not every show is the same. What each audience sees is carefully considered, partially driven by the presenting organizations, partially by what they’ve shown in that city in the past. If Pilobolus has played the venue before, they’ve kept tabs not only on the program they presented, but on the reaction of the audience. After lining up what the presenter requests, they use that information to fill out an evening. “We try not to show something the audience would have seen before,”  co-dance captain Nile Russell says. “We try to keep it new each time.”

This means the dancers must have a lot of material ready to go. “All of us have 20-30 pieces in our bodies right now,” Russell says.

Another thing to know about Pilobolus is that they tour a lot. Their home base is in northwest Connecticut, in Washington Depot. “We’re pretty much up in the woods with very limited cell phone reception,” Russell says. “Everybody knows us around town and we know all of them. It’s a beautiful small town.”

But they’re only in that small town for roughly four months of the year. While they’re in Washington Depot, they keep a fairly ordinary Monday through Friday, nine-to-five work schedule, during which they’re making new dances and keeping the repertory in shape. The rest of the time, however, they are on the road, performing 100-135 shows a year.

Russell thinks that rigorous touring schedule is part of what appeals to most of the dancers in the company. “For a lot of us, we haven’t traveled the country much before we joined this company, and this company tours the U.S. extensively,” he says. “You go to some places you would have never thought of going to before and you’re completely surprised by how beautiful it is.”

Russell also spoke about three of the newer pieces in their repertoire that will be “in their bodies” as they tour. 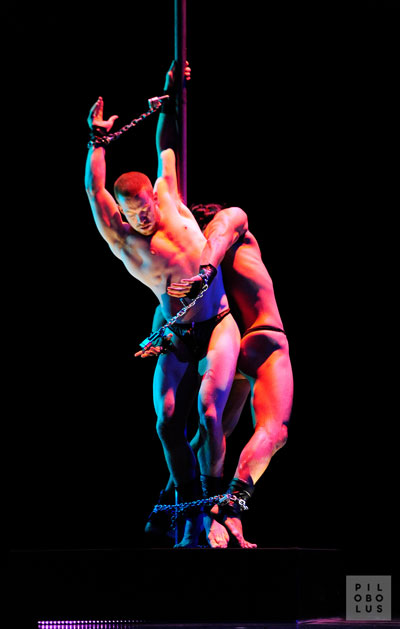 Pilobolus in Penn and Teller’s Esc. Photo by Grant Halverson.

One piece, called [esc], is a collaboration with the illusionist duo Penn & Teller. Russell says this piece began in mutual admiration. When their schedules permitted, they went into a studio and improvised around each other’s skills. Their attitude, says Russell, was “Let’s see what happens. Either something will happen and it’ll be great or if it doesn’t, we just won’t show it!”

What evolved out of those improvisation sessions is something of an homage to Houdini. [esc] isn’t so much about illusions and magic as it is about escapes. With Houdini, Russell notes, “people could see the physicality of what he was doing—you could see the struggle.” In the piece, Pilobolus dancers are confined in one way or another and, without illusion or tricks, are forced to work their way free. Be ready for some audience participation.

Another recent piece, Licks, is the third collaboration between Pilobolus and choreographer Trish Sie. Sie first came to the attention of Pilobolus for her ingenious choreography for videos by the rock band, OK Go. (OK Go’s lead singer is Sie’s brother, Damian Kulash.) A video for the song “Here It Goes Again” became a viral sensation for its use of treadmills.

When Pilobolus approached Sie about collaboration, she was keen on the idea—she and her brother were both already fans of Pilobolus. Another video for an OK Go song, “All is Not Lost,” featured Pilobolus.

Licks involves different kinds of ropes which, in the course of the dance, become dancers themselves. Russell describes it with words like “sexy,” “alluring,” and “high energy.”

Houston audiences will be familiar with the work of a third collaborator, Sidi Larbi Cherkaoui, who has been showcased many times in the annual Dance Salad Festival. Cherkaoui and Pilobolus were brought together by Charles Reinhart, former director of the American Dance Festival, where Pilobolus is a perennial favorite. Russell called the match, “One of the best experiences most of us have had in dance, period.” 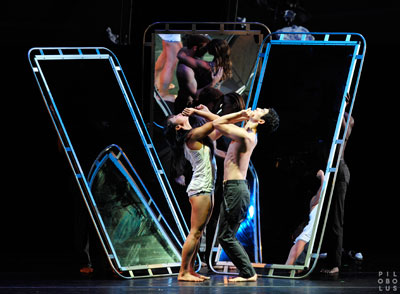 This collaboration, called Automaton, deals with the place technology has in our lives. Movement progresses from robotic to more naturally human. One idea the choreographer and company played with was that the closer a robot or android comes to be like a human, the more threatening it becomes to human beings. Russell called Automaton “reflective, perhaps a warning.”

The last thing to keep in mind with Pilobolus is how Russell summed up their collaborative process: “With Pilobolus, the interesting thing to know is that there’s no direct or certain way to go about things.” From escaping bondage to dancing with ropes to exploring the threats of technology, discovery and surprise are built into their process.

With up to 30 pieces ready to go, there should be plenty of opportunity for surprise, whatever program you find at a theater near you.