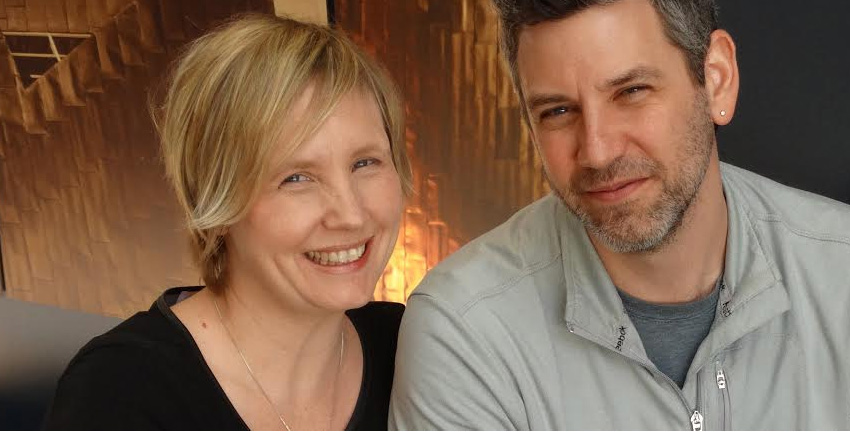 It’s not every day that Texas choreographers get a shout out from Felicity Huffman on Twitter. But that’s exactly what happened to NobleMotion Dance co-directors Andy Noble and Dionne Sparkman Noble after the fifth episode of the ABC drama American Crime aired on Feb. 3, which featured four uninterrupted minutes of their outstanding choreography.

The Nobles, both on faculty at Sam Houston State University, spent the month of September preparing for this project. They gathered dancers from NobleMotion, Bruce Wood Dance Project, as well as alums from Sam Houston State University, Booker T. Washington Performing Arts High School and HSPVA for the makeshift troupe they put together for the show. A + C editor NancyWozny visited with the Nobles to talk about their experience bringing dance to network television.

We don’t often see contemporary dance on network television, which is not attached to reality show. How did American Crime director John Ridley learn about you?

Andy Noble: My understanding is he asked folks in the dance community for recommendations. Apparently our name came up several times. They started doing some research on NobleMotion Dance and after a few phone conversations decided to make the trip to Houston to see our August show Storm Front at The Hobby Center. We were sold out, but managed to finagle a couple of seats for them. It was probably our most successful show to date, so they picked a good one to see. Things just took off from there.

Your dance is embedded in fairly complicated plot involving a rape accusation at a high end high school. Certainly not the kind of show we might expect to find dance. Did he tell you about the plot of the show?

AN: Initially, John shared the bare minimum with us. We knew the season dealt with male on male sexual assault. We also knew he was dealing with touch in all of its manifestations and that sports were also going to be a focal point. Once we got on location and started creating the work, we slowly started to learn more about the characters and their circumstances. The folks at American Crime were very guarded with the story for obvious reasons. But I also think it was very intentional of John that we not let the narrative of the show dictate too much of the choreography, but that it remain abstract. Interestingly, I think the dance ended up really capturing the essence of the show.

Dionne Sparkman Noble: That being said we didn’t go into this totally blind. We watched AC’s Season 1 and “studied” the show’s approach to story telling. It’s unrelenting, yet empathetic and offers several points of view regarding the issue at hand. We knew we had to capture that sensibility in our dance.

What direction did Ridley give in creating the piece?

AN: John gave us a tremendous amount of latitude inside of the creative process.

DSN: He stressed that the scene would be pivotal to the story line and that it should show both beauty and the “urgency of passion.” He even used the word “inchoate” to describe the structure he was looking for – yeah, I had to look that one up.

Did you have a lot of back and forth as to its content?

DSN: We were provided a studio rehearsal space in Austin. John wanted to be able to visit rehearsals to see our progress and essentially direct the choreographic choices. What I appreciated most about his directing was that he was supportive instead of invasive, really honoring what we created. He was interested in getting the ending right and to do so, we problem solved together. He was also interested in extending the time spent with different characters of the dance. And actually, the original instructions were to make a dance that was three minutes in length, no more no less. That went out the window when John realized he wanted the dance to take more time to develop. We didn’t argue, we were delighted about getting more airtime for the dancers!

AN: John was really excited about the prospect of having dance in this season of American Crime. He seemed to enjoy watching our creative process and seeing how the dancers worked together. Actually, the entire team American Crime team was pretty involved. They really did an excellent job of creating a collaborative environment.

The music is by the legendary film composer Mark Isham. Did you have the score when you were creating the dance?

AN: Mark Isham actually composed the music specifically for us. We had a couple of great conversations over the phone and provided him a general direction for his score. When we got the first draft back, we were blown away. You know we love to collaborate; so working closely with him was certainly one of the highlights of this project. There were so many elements to this shoot, so his composition really served as the anchor for the dance. The actual finished composition that you hear was composed to fit the final edit with additional instrumentation and adjusted timing.

Now that you have seen the episode, how do you think it fits into the story?

DSN: Looking at the finale product in context to the storyline, I can see how dance was a great vehicle to show the complexity of relationships and the ostracism, power struggle, and physicality associated with the subject matter.

AN: I was so curious to see how this season’s story was going to unfold and how our dance would add to the overall concept. We were both very pleased! The dance, without being too literal, really captures the inner dynamics of these characters struggles. A lot of American Crime fans are wondering if there is an Easter egg in the dance. For us, that was not the intent of the dance, but I do think it provides another way to look at the relationships in the story.

What kinds of reactions are you getting from the show?

AN: Amazingly, almost four million people watched this episode. There has been such a wide range of responses, but most of them very positive. We have received really good reviews by the critics so far, but what has been the most fun to read is all of the discussions on social media. Some of them are an absolute hoot. The general population is talking about dance and its communicative power. How cool is that?

What did you learn from this experience?

DSN: The newest part of the experience for me was creating a dance in a short amount of time and having it successfully add to someone else’s vision. Andy and I are usually creating dances based on our own wishes and desires – this was an entirely different process for us. It’s nice to know we can pull something like this off!

AN: To be a part of an ABC network TV show and work with a budget the likes of which I have never experienced–it was pretty eye opening. My mind is brimming with ideas and I can’t wait for the next opportunity.

AN: Our next show, L’Dor Vador (“From Generation to Generation”), is an evening of poetry and dance that tells the story of my family’s journey from Holocaust Germany to the theaters of East Texas. In many ways it captures elements of every emigrant’s story and I am so excited to collaborate with Claudia Perez (my mother) to bring my grandparents poetry and haunting stories to the stage. While there is some tough thematic material, there is something incredibly uplifting about the power of family. It will be at the Jewish Community Center’s Kaplan Theater April 9 & 10.