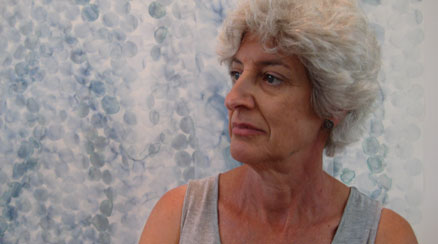 Dara Mark Goes With the Flow

She’s a self-proclaimed starving artist who says she has been making things all of her life. Since her dad is an artist and an art teacher, viagra order too, one would think that Santa Fe resident and artist Dara Mark would have plunged right into the field and never looked back.

Not so, however, since she says her father, while encouraging her when he brought left-over art supplies home from school, wasn’t quite so encouraging when it came time for Mark to commit to a career.

“He thought I’d ‘starve in an attic’ to use his phase,” she says. “And he was right, too, because over the years I have come close to starving. It hasn’t always been easy, but it has always felt like my life path.”

Armed with a BA from Yale and an MFA from the University of California at Santa Barbara, since moving to the Santa Fe area in 1997, Mark says her genre has been all about non-objective, abstract painting. This month Mark is headed to North Texas to show her art at Dallas Design District’s fine furnishings store, Smink. Her works will be on display October 13-November 24, 2012.

A+C: What can folks expect from your Smink show?

DARA MARK: I paint large, non-objective watercolors. They’re transparent —  transparent paint on a transparent surface that’s layered to create a sense of depth and movement. But they’re also solid objects in frames to hang on the wall. Each painting is one, or maybe two complex colors, by which I mean colors that have been mixed and are often hard to describe. I’ll be bringing work that introduces a new element to my painting: long painted bars, as opposed to the fields of small circles that filled my older paintings. These bars or stripes allow the wet paint to move more dramatically and create larger patterns.

A+C: Over the years how have you morphed into the artist we see today?

DM:  To please my dad, I studied architecture at Yale. Architecture is still an interest, but I found I’m not a planner. I need to make things with my own hands. That led to pottery — my idea was to make and sell pots to support myself. These became the starving years so I went back to school. It was while making sculpture in Santa Barbara that I began to draw highly meticulous compositions that had both geometric and naturalistic elements. They were a tidy antidote to the wonderful mess of clay work. Drawing began to take over my attention, and eventually led to some extended suites of landscape drawings and then to some minimal overall field drawings. My current paintings come out of that minimalism, though you can’t really call them minimal anymore.

A+C: Your philosophy on art would best be described how?

DM:  I don’t have an overarching philosophy of art. I like work that holds my attention for a long time, but that can be for one reason or another. Painting for me is a process of doing something with paint and then paying attention to what happens. It involves vision and feeling and intuition. It’s a dance that I hope my viewers can feel, too. I think the dance is strongest when it’s subtle.

A+C:  One of your themes is Chaos and Order; how does that come together?

DM:  I begin with an orderly process of painting repeated shapes, little circles or the new measured stripes. The paint is allowed to take over from there, moving around and settling on the paper in its fluid, unconstructed and unpredictable way. It’s important to me to let the paint express itself. It’s important to invite natural magic into the work, to have surprises. Then I impose another sort of order on the painted sheets of translucent paper by overlapping and layering them until the painting feels right. My painting process is a bit like my garden, which has permanent trees and shrubs for a structure, or the architecture you might say. Then I just invite in wildflowers. This kind of gardening requires a lot of weeding!

A+C: Does anything in your life reflect in your works?

DM:  In 2005 I got sick with heavy-metal toxicity and various other complications and couldn’t work or do much of anything. It took years to recover from the illness and my career was on total hold, but I used this down time to deepen my meditation practice. At the time, it was literally all that I could do. I know this quiet period affected my work, made it more thoughtful in ways I can’t even explain. This spirituality is in the paintings as a sort of undertone.