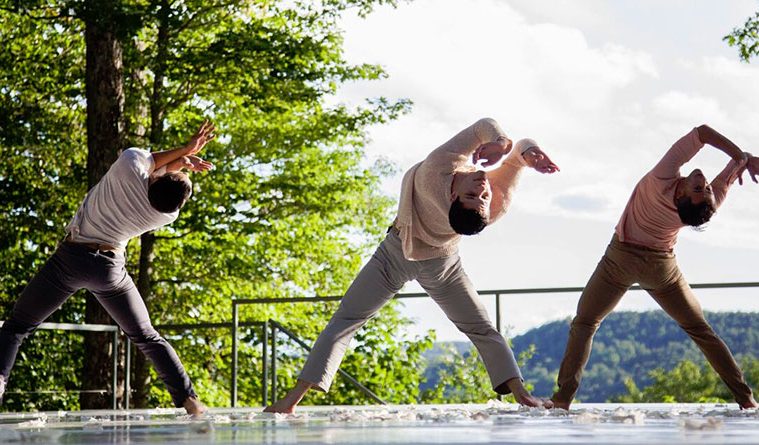 Dark Circles, MADBOOTS and other Texas Ties to the Pillow 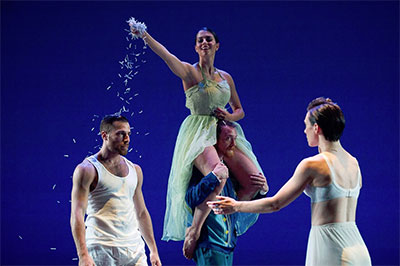 When Dallas’ Dark Circles Contemporary Dancers took Jacob’s Pillow’s storied Inside/Out stage on a breezy Wednesday evening, it was hard not to be filled with Texas dance pride.  Joshua L. Peugh (25 to Watch in Dance Magazine) and his troupe wowed the 700 plus crowd with three of his whimsical wonders, White Day, Slump, and Critics of the Morning Song. Something about the wind, the mountains in the background, the whole pastoral scene, supported Peugh’s light-handed whimsical lyricism. You can catch Dark Circles next at Dallas DanceFest, The Dance Gallery and in October for his Fall Series.

BODYTRAFFIC also performed Peugh’s A Trick of the Light earlier in the season, so it was really a double Pillow debut for this rising Dallas choreographer. The Los Angeles-based BODYTRAFFIC lands in Dallas through TITAS on Jan. 22 and through SPA Houston on Jan. 23 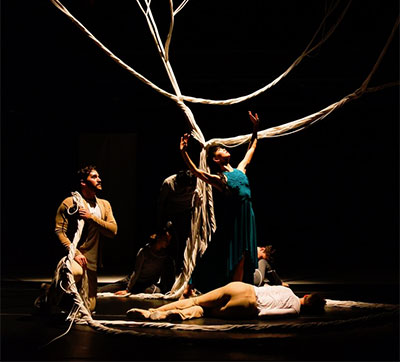 Steven LaBrie with Jessica Lang Dance in The Wanderer.
Photo by Takao Komaru.

Jessica Lang is not from Texas, but we like to pretend she is, as she has been commissioned by TITAS and Dallas Museum of Art, and is well known in the Lone Star state. Lang’s chamber ballet The Wanderer enjoyed a two-week run at the Pillow. Set to Schubert’s song cycle, Die schöne Müllerin,  The Wanderer featured an outstanding performance by Dallas native Steven LaBrie, who recently performed in Dallas Opera‘s La bohème.

Trey McIntyre, former Houston Ballet choreographic associate, showed us that he is still a dance maker to reckon with in his new work, Under Fire, for Cuba’s Malpaso Dance Company, set to the melancholic songs of Grandma Kelsey. Malpaso makes a Houston stop through SPA on April 30, with Auturo O’Farrill and The Afro Latin Jazz Ensemble, who make a Da Camera stop earlier this season on Oct. 24.

But the Texas ties really go back to when Pillow founder Ted Shawn toured Texas with his Men Dancers in 1937 and 1939. Evoking some cherished history, the all-male MADBOOTS, directed by Dallas native and Booker T alum Jonathan Campbell and Austin Diaz, closed the festival along with Martha Graham Dance Company, now heading into their 90th season. Dancing two provocative works, Beau and (SAD BOYS), MADBOOTS is definitely a troupe to watch. Houston native and HSPVA grad Robbie Moore delivered a standout performance in the world premiere of MADBOOTS’ (SAD BOYS). 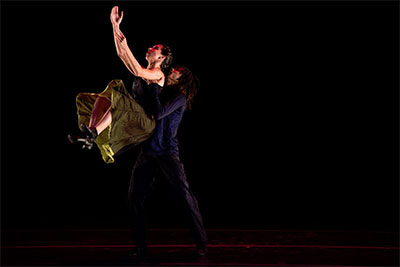 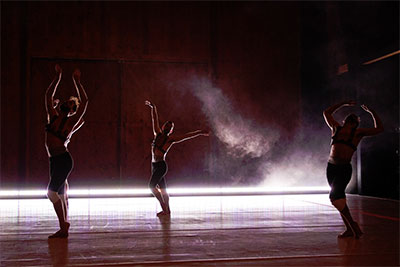 Booker T. Washington alums Alysia Johnson, Madison Hicks and Antuan Byers participated in the Contemporary Program at The School at Jacob‘s Pillow, while Trashad Alladin was in the Social Dances Program.

My last hours at the Pillow were spent watching Ron Honsa‘s moving Jacob’s Pillow documentary, Never Stand Still, which chronicles the dance mecca’s history and impact on artists, largely made possible during the last 17 years by departing Pillow Executive and Artistic Director Ella Baff. Her remarkable stewardship is now part of its history.