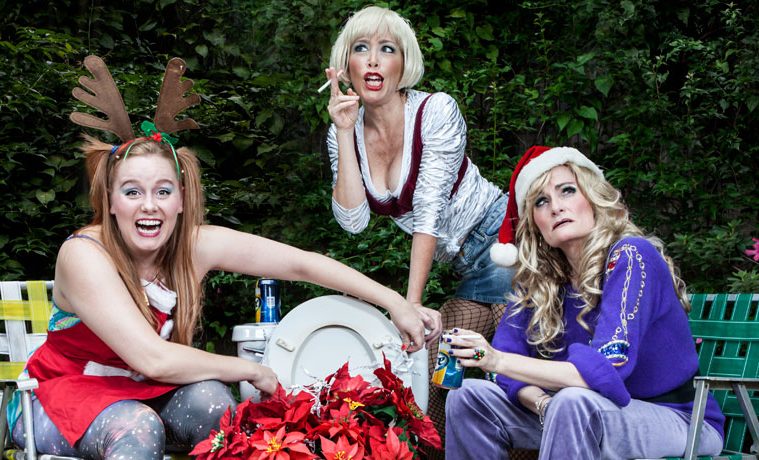 A Texas Twist on Holiday Theater 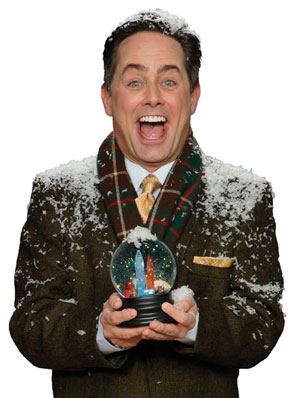 Martin Burke in This Wonderful Lfe at Zach Theatre. Photo by Kirk Tuck.

How many dance devotées first became entranced with ballet as children, watching a swirl of human snowflakes float across the stage? How many regional theater season subscription holders had their first taste of an onstage happy ending when a gleeful Ebenezer Scrooge saves the Cratchit family through the magic of a giant turkey for Tiny Tim?

For some of us, the love of the performing arts can be traced back to that favorite holiday show we went to see year after year as children. A holiday tradition can become a life-long love of the arts. Yet, sometimes we need to be wary when tradition becomes a holiday rut.

In my own life, the warning signs are clear. As soon as I begin rooting for the rat revolutionary army to overthrow the Nutcracker Prince and institute a constitutional democracy or when I begin to wonder what kind of kinky ménage à trois those Ghosts Past, Present, and Future are having anyway, I know it’s time to take a break from tradition. Instead of that giant turkey, I want something new from my local performing arts institutions: a new story, a new song to bring back some wonder to my holidays.

Why is that mid-November to January 1st period so important for the life of a regional theater? This was the question I took to Kenn McLaughlin, the artistic director of Stages Repertory Theatre in Houston. Under McLaughlin’s reign, Stages has run two unique, concurrent holiday shows for several years now, so I asked him to be my seasonal theater expert. He had two answers to my question— one practical, the other filled with hope for humanity.

It’s a robust market place,” he admits. “People save for that time of year and then they spend a lot. The market share is huge for everybody.” He notes that many theater companies can expect a holiday show to bring in more ticket sales than any other production during the year. 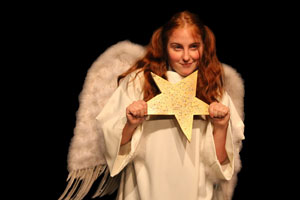 McLaughlin believes beyond the monetary reason, all those Christmas Carols and Miracle on 34th Streets adhere to the best of our holiday values. “Families are together and they’re looking for things to do together as families,” he explains. “There’s a general sense of engagement in the larger community. The arts are the perfect thing for that. The core ideas underneath Christmas of coming together as a community and reaching out to others, all those things are alive especially in theater.”

This seasonal theater-going tradition can lay down a foundation for a continuing love of the arts for the rest of our lives, but does custom require us to see the same play December after December? Might the act of joining that small, transitory community, the audience, be enough to keep us charged until the new plays bloom in the spring? Simply put, can we skip out on Ebenezer’s turkey dinner this year and check out something different?

If you’re at home in Texas for the holidays, the answer is yes. Throughout the state the smallest to largest companies are offering new and exciting plays and musicals, some to delight the biggest holiday romantic, others to satisfy the humbug-iest of the Scrooges, like myself.

One way Texas theater companies are keeping holiday theater-going traditions alive while giving audiences some variety is by offering a new perspective on familiar tales. 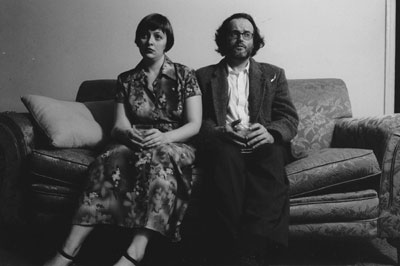 Marie and Bruce runs Nov. 22-Dec. 14 at the Catastrophic Theatre in Houston.

Perhaps the best example of this twist on the old favorite is Tony Award winning playwright Christopher Durang’s Mrs. Bob Cratchit’s Wild Christmas Binge, presented by the Richardson Theatre Centre (Richardson, TX) from Dec. 13-29. What happens when a drunken and suicidal Mrs. Cratchit has to contend with a temporally-challenged ghost? Apparently, a musical comedy parody, perfect for us Christmas Carol cynics.

Addison’s WaterTower Theatre takes literature’s most beloved detective and adds in Christmas comedy with Ken Ludwig’s The Games’s Afoot (or Holmes for the Holidays), which runs Dec. 13 – Jan. 5. An actor, famous for playing Holmes, is forced to solve an actual murder, with hijinks probably ensuing.

North Texas seems to be the hot spot for these types of offbeat takes on classic tales, because Dallas is where we find the Uptown Players production of Paul Rudnik’s version of “The Book of Genesis” in The Most Fabulous Story Ever Told. Just like in the Garden of Eden, there will be nudity to brighten up your nights, Dec. 5-14.

Unfortunately, I doubt there will be nudity down in Austin, at least during This Wonderful Life, Nov. 21-Dec 29, when Zach Theatre favorite Martin Burke plays all 37 characters from It’s a Wonderful Life in a one-man, live version of the film.

If North Texas and Austin are the places for wonderfully warped revisions, Houston is the theatrical capitol when it comes to world or regional premieres. In this group, Stages excels. 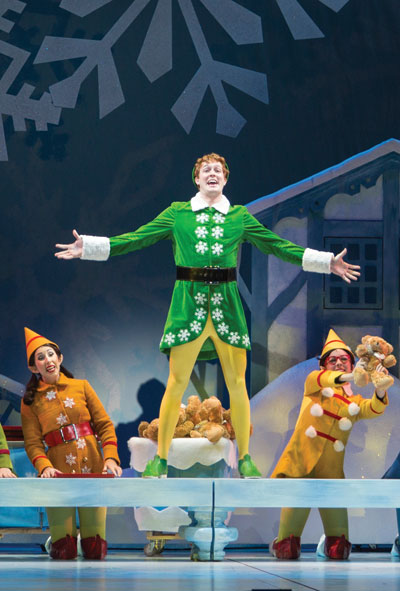 The 5th Avenue Theatre’s staging of Elf: The Musical. Photo by Mark Kitaoka.

McLaughlin has taken the oldest holiday show tradition, Christmas Panto, and created a new Texas Panto genre. A British favorite for 150 years, “Panto” musicals are usually re-imagined fairy and folktales, with lots of villains, heroes, and audience participation for the kids and bawdy jokes for adults.

“What’s great about it for Stages is that we get to reinvent it every year,” explains McLaughlin. “That’s what I was looking for from a producer’s standpoint. I wanted to take advantage of a robust market. I wanted to find something that would excite our audiences and take advantage of the family audience potential, but I didn’t want to do the same play.”

Maintaining Stages’ “Panto brand” means commissioning a new play each year, which brings a tremendous amount of work for the company, but McLaughlin thinks it worth it. “It becomes a generator of energy among the staff,” he says. “They get really excited about what we’re going to do each year and how we’re going to reinvent this idea. It comes back around as a touchstone of creativity.”

Another musical that will likely be brand new to Houston audiences is Main Street Theater’s production of Pulitzer Prize winning playwright Paula Vogel’s Civil War Christmas, which runs Nov. 23-Dec. 22. Vogel creates a kind of Christmas quilt as the stories of historical figures such as Abraham Lincoln, Walt Whitman, and Robert E. Lee, along with imagined and composite characters, are stitched to depict the cold, Christmas night of 1864.

Finally, for those drama lovers who would like to eat their Dec. 25 dinner, whether figuratively or literally,  at the best Chinese or Indian restaurant in town, a few theater companies invite you to ignore the holidays with them.

Two cutting edge companies, Catastrophic Theatre in Houston and Kitchen Dog Theatre in Dallas have offerings that forbid the tinsel and blinking lights while taking a deeper look at what our yearly celebrations and remembrances should perhaps really be about. 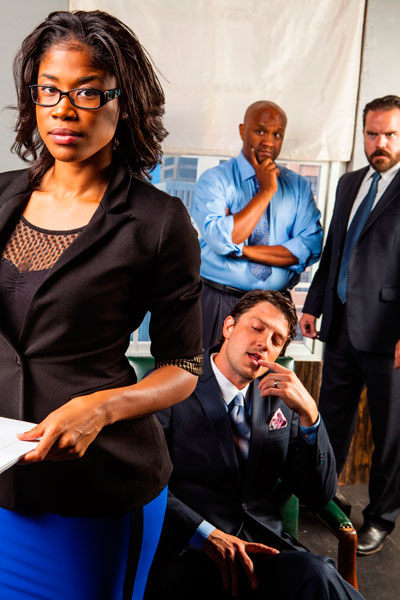 Tina Parker, co-artistic director of Kitchen Dog Theatre, points to their mission statement when discussing their choice of David Mamet’s Race, running Nov. 15-Dec. 14, as a kind of “theatrical palate cleanser.” That mission — to provide a place where questions of justice, morality, and human freedom can be explored” — calls Kitchen Dog to “regularly provide an alternative to the more traditional holiday theatrical offerings,” says Parker. She also notes, however, “the holidays are a perfect time, in our opinion, for some self-reflection—both in how we personally operate and in how we treat our fellow human beings —in order to become better people.”

And how will Mamet’s play about three lawyers(two male, one female; two black, one white) defending a wealthy white man who is accused of raping a young black woman bring audiences some of that holiday self-reflection? Kitchen Dog’s other artistic director, Christopher Carlos, who will also direct Race, says of the production, “Mamet argues that we still have a long way to go before the debilitating preconceptions of racism cease to permeate our collective consciousness. Our challenge, as both human beings and truly global citizens, is not to let it, while still remaining true to ourselves and being forever mindful of the iniquities perpetrated in the past.”

Back in Houston, Jason Nodler, co-artistic director of Catastrophic Theatre, has some similar ideas about Marie and Bruce. The Wallace Shawn play about a bad marriage is a kind of ironic anniversary celebration for the 20-year collaboration between artistic directors Nodler and Tamarie Cooper. He directed and she starred in the play in 1999. But why preform it Nov. 22-Dec. 14, when we should be nearing our apex of joy and good cheer?

“We always try to provide an alternative to holiday shows; while  this is not a proper ‘Holiday Play,’ in a very unusual way Marie and Bruce is indeed a holiday play,” explains Nodler. “The holidays are, for many people, a time of stress or sadness. And for some, even when surrounded by friends or family, the holidays can be a lonely time. Marie and Bruce is about a difficult marriage that will probably last forever, and so we feel it might be cathartic for people who have those difficult responses to the holidays, whether they say so or not.”

Though it might not be filled with great holiday cheer, Nodler stresses that Marie and Bruce is also a comedy. “This play, like most that we program, is both heavy and very funny. I appreciate plays that do both things and Marie and Bruce is most certainly one of those plays.”

And to All a Goodnight

After all that dark, comic introspection, it might be time for a show that is probably the silliest holiday offering of the year: Elf, the Musical. The traveling Broadway version of the Will Ferrell movie arrives at the Houston’s Hobby Center on Dec. 6 as part of the Theatre Under the Stars season. An orphan boy crawls into Santa’s bag one Christmas, and the North Pole elves decide to keep him and raise him as their own. What happens when he grows up and realizes he’s human and not an elf? Does that elf spirit come from the genes or the heart? These types of theatrical yuletide questions are so ridiculous, I can’t help but feel a bit of wonder.