Her first survey exhibition, Robyn O’Neil: WE, THE MASSES, is on view at The Modern Art Museum of Fort Worth, Oct. 18- Feb. 9, 2020. The connecting thread of her work over the years? “Me trying to portray what it’s like to be a human on this planet,” she says. While that’s no laughing matter, it’s not without its moments of existential-dread-driven humor. And drawing effectively lends itself to making visible the dark corners of the imagination.

O’Neil and The Modern’s associate curator Alison Hearst began planning the 20-year survey exhibition approximately two years ago, an idea sparked by an impressive monograph of the artist’s work published by Archon Projects. 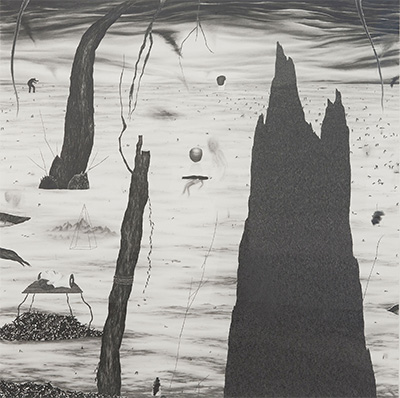 The show includes O’Neil’s major multi-paneled drawings, collages, a new triptych in color, and her signature works of graphite (mechanical pencil) on paper of which the large-scale, intricately-executed drawings are perhaps the most recognizable: tiny figures in vast, ominous landscapes. Exhibition visitors also have the opportunity to view her 2011 animated film WE, THE MASSES, and a selection of secret gems including vitrines filled with her sketchbooks of thumbnails of “everything she has ever made.”

After several years living in Texas and a stint in Los Angeles, O’Neil recently relocated to Seattle. This Midwestern-born artist loves the basics—“turkey sandwich” basics, as she describes them. Some of her favorite things are, for example, a taco restaurant called Taco. It’s a banal joke that falls flat, like the figures in her animation who plumet from one cliff and then another, seemingly unfazed and uninterested in preventing repeat performances.

Other favorite things include the Lifetime television channel, which she listens to (more so than watches) while in the studio. Perhaps the scripted drama and clean cut endings help her produce her own storylines. It’s also the no-nonsenseness of a thing that catches her attention. For example, in an episode of her podcast Me Reading Stuff, she credits Carson McCullers’s short story A Tree. A Rock. A Cloud as instruction of sorts for how to organize her exhibitions. And she explains her appreciation, near kinship, for Joshua Slocum and his memoir Sailing Alone Around the World, a travelogue of the first man to sail alone around the world. What is the memoir about? Sailing alone around the world. What’s the title? Sailing Alone Around the World. It’s a circular conversation with its own generative, predictable—and admittedly comforting—conclusion. 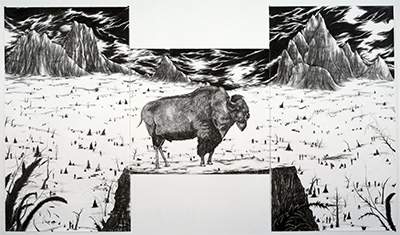 Robyn O’Neil, As Ye the sinister creep and feign, those once held become those now slain., 2004. Graphite on paper. Overall: 92 1/2 × 166 in. Elyse and Lawrence B. Benenson Collection

A similar episodic, matter-of-fact spirit shows up in her own work. Repeatedly, she gathers her figures in disaffected herds. Her compositions are heavy with never-ending emptiness and uncertainty, creating a feeling of watching an experiment unfold in a laboratory of humanity. “Put this figure here, kill them, see what happens,” she says frankly.

Swarms of flies buzzing around dead animals, and relentless raindrops (or is it falling ash?) are literally everywhere. The imagery is especially haunting as, this summer, we witnessed the melting of massive ice holdings in Greenland and Alaska. And yet, at least in O’Neil’s version, opportunities for help appear. A rescue rope from nowhere dips down to the swells of dark water, a beam of sunlight breaks through the clouds.

The figures, outfitted in black sweat suits and classic white Nike sneakers, take their cues from O’Neil’s father and his good friend, otherwise known as Jim and Marty. The artist refers to them as “sweatshirt guys, like John Goodman’s character in the television show Rosanne.” As an adult, living away from her family, she missed these “normal” guys, and started drawing them in a smart-alecky way, to see how they, amidst their skiing escapades and calisthenics, might navigate the darker side of life. 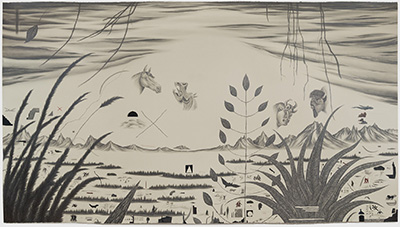 But this isn’t a story about the end of the world, nor is it about father-daughter relationship strife. Through these surrogates, O’Neil can hone the truly upsetting and numbing sides of humanity, navigating some rather dark, uncertain territory. It’s more of a controlled, familiar, and maybe even safe way for her to ask scary, often inaudible questions about being alive and living life in uncertain times but, at some point, facing certain death.

Though the scenes in her work come from her personal, interior worlds, many people can relate to similar difficulties in continuing with life as usual. “I’m happy, and appreciative of being alive on the planet. But at the same time, I’m very aware of how horrible things are. My work is a statement on that dichotomy—going to the grocery store, buying something as innocent as strawberries or whatever, while the checker at the store might be a serial killer,” she says. Attentive viewers will pick up on these cues in her newest work of graphite, colored pencil, and acrylic on paper, titled An Unkindness, included in the exhibition. Rays from the sun, a break in the clouds but mired in darkness.

And it is that break in the clouds, that self-created moment of respite, that carries her forward. “I never feel better than I do when I’m drawing. The act of drawing on paper feels so good,” she says. “It’s how I cope with being alive.”