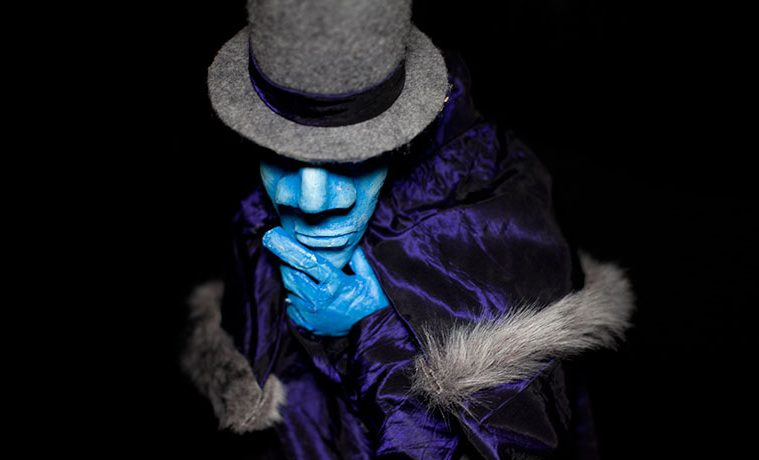 The Stepchild of Theater Thrives in Texas 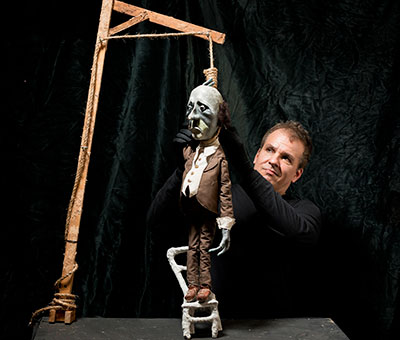 Most of Texas’ foremost puppeteers aren’t the performers you’d want at your children’s birthday parties. “Not unless,” as Connor Hopkins says, “you want your kids to cry.” Artistic director for Trouble Puppet Theater in Austin, Hopkins speaks for his own steam-punk, expletive-filled aesthetic, but the description seems to fit for many prominent Texas puppetry companies.   Last year in Dallas, Matthew Posey of Ochre House used puppets to take audiences into a slaughterhouse in Dreams of Slaughtered Sheep. In Houston, Bobbindoctrin’s upcoming remount of Danse Macabre (11/6-11/19 at 14 Pews) is one puppet’s tale of misery, despair, and suicide.

This fall, Trouble Puppet is bringing Austin a re-imagining of Robert Louis Stevenson’s Classic, The Strange Case of Dr. Jekyll and Mr. Hyde (Oct. 30 – Nov. 23), but with Hopkins’ own special twists. Hopkins explained he was drawn to this particular story for its banality. “I don’t find the central metaphor to be all that interesting. It’s something we all take as a sort of given of human psychology now: the idea that people have dark sides, people have light sides, people pretend to be things that they’re not. How do you take something where everybody knows the story and crucial plot twist, because the whole book is built on this revelation that’s played out by the time you’ve finished reading the title… how do you take something where all of that is given away before you even get anyone interested, and make it compelling?”

Telling it with puppets is a start, but Trouble Puppet shows usually layer on a bit of political commentary and a lot of humor. A long-time vegan and something of an anarchist at heart, Hopkins described his ideology by pointing out that a number of Trouble Puppet shows explicitly conflate capitalism with cannibalism. Even when he’s doing shows that seem apolitical, he often turns to the historical background to add flavor to the story. 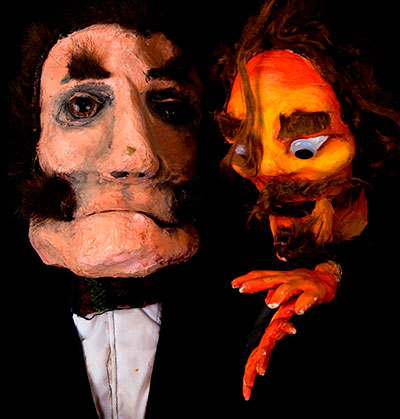 That’s why in Hopkins’s The Strange Case of Edward Hyde and Dr. Jekyll, there will be a socialist chambermaid, and Dr. Jekyll’s journal reveals an interest in the burgeoning field of eugenics, which proposes to improve mankind through targeted breeding and sterilization over several generations. An avid optimist, this Jekyll hopes instead to “perfect it in an instant with a hypodermic!” But, as we all know, things don’t quite go as planned.

While he wouldn’t reveal too much about his updated version, Hopkins did talk about his love of what puppetry can do that normal theater can’t: “You can’t make your actor grow to be five times taller than they are. You can’t literally fly people around. You can’t fling your actors off the stage to lie in a heap for the rest of the show.” You certainly can’t mount Shakespearean battles or disembowel your actors on stage, but that’s precisely what Hopkins did in Trouble Puppet’s production of Macbeth.

After seventeen years of puppetry in Austin, Hopkins still encounters some frustrating assumptions when he tells people he’s a puppeteer. He ruefully chuckled at the way people are surprised by how emotionally invested they can get in a puppet: “They didn’t think about the fact that they were emotionally involved because these people performed in a very particular way and it took three of them to make that one character be so affecting.”

He explained, “Puppetry is the red-headed stepchild of the theater world. It tends to be a little scrappier and a little more rambunctious [than acting], which I really like about it. I’ve always thought of it as a sort of people’s art form… a lot of our puppets are just made out of trash! So you don’t have to have anything special, you don’t have to have a lot of money.” 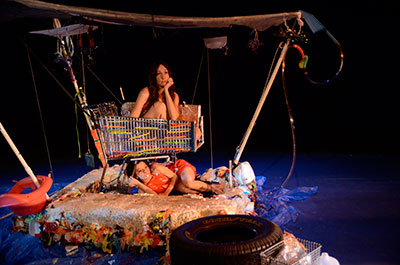 Glass Half Full Theatre in The Orchid Flotilla
Photo by Stephen Pruitt.

But on the whole, he said, puppetry in Texas is finally being taken more seriously. When he first started working in Austin, Hopkins didn’t want the awards committees to create a special category for puppetry, since for a long time, he was it. Rather, Hopkins takes a lot of pride in the fact that his shows and those of Austin’s other major puppetry company, Glass Half Full Theatre, now garner awards and nominations in “regular” theater categories.

Glass Half Full also produces shows with an ideological flavor, though artistic director Caroline Reck pushes against labeling her plays as “political.” Reck tackles real world situations that audiences may not have a close emotional connection with; for example, her recent production of The Orchid Flotilla imagines a dystopian future where one woman’s trash is (quite literally) another woman’s treasure.

Reck notes, “I think it’s really important that it’s not about blaming any one person;  you are not at fault because you like to wash your hair and use your hair dryer. It’s more that ‘we’ collectively have done this, so we have a collective obligation to investigate it and figure out what changes are implied for the future.”

Lately, Reck’s interest in environmental concerns has lead her to develop a style she calls “environmental puppetry,” in which puppeteers manipulate the space around tiny puppets as a means to illustrate the massive forces put upon humans. Her show, Once There Were Six Seasons, uses this style to address issues of climate change and cultural geography. Glass Half Full has been invited to perform the show at the National Puppetry Conference next year—one of only 20 companies selected out of a pool of more than 150 applicants. 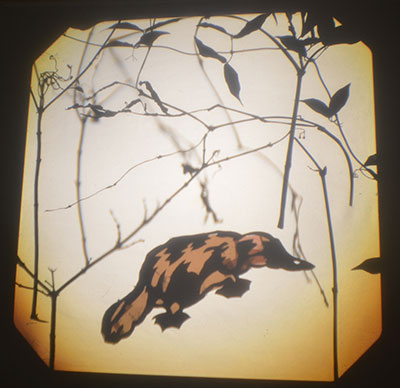 Most of the puppeteers I spoke with noted that their love for the art form stems from the craftsmanship that goes into performances and the way puppetry calls attention to movement over language. Reck explains, “Puppets tell stories with physicality at least as much as words; you learn a lot about them from their actions, their breathing, where they’re looking. Their intentions have to be portrayed physically in order for somebody to understand them,which, is probably true of actors, too, but they can get away without it.”

Similarly, the women behind Houston’s BooTown, which primarily uses shadow puppets, love the craft for its deceptive simplicity. Artistic directors Emily Hynds and Lindsay Burleson see puppetry as a fruitful way to take on difficult issues. Their shows often deal with life journeys that end in death or morbid oddities.

Burleson related the story of a recent production in which a butterfly was caught in a net and then had its wings ripped off. She noted that because shadow puppetry involves such delicate images, it can be all the more shocking when they are destroyed.

Commenting on both the morbid tendencies of their own shows and of adult puppet theater in general, Hynds added, “Using puppets to communicate morbid issues makes it more approachable for everyone, including us as creators.” It also offers a lot of artistic freedom.

The team is currently working on a show (slotted for sometime in early Spring) that will bring together werewolves and sex workers. Primarily Burleson’s project, she explained how she started down the path: “A lot of literature I read about werewolves [comes] from the male perspective, which I think is fascinating. It’s always a male curse, and it’s very rare to see females cursed. It’s really the curse of man, where we’re fighting the Id, the Ego, and the Super-ego, where you let go the animalistic instincts.” She saw a connection between that narrative “and a lot of questions I’ve always had about sex workers and the idea of being an empowered sex worker or being a sex worker because it’s forced; that kind of goes with the idea of self and who you want to be, and empowerment.” 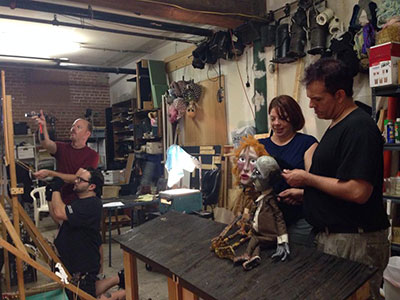 The show is in an early phase of development, but both women are excited to experiment with other forms of puppetry (this show will likely involve some live actors and possibly tabletop puppets). They’re grateful for the supportive environment they’ve encountered in working with other Texas puppeteers.

Discussing their indebtedness to Bobbindoctin in particular, Burleson explained how much they appreciated the help they got from Camilla Clements (another prominent Houston puppeteer). When putting on a puppet show, “you spend a lot of time making, and messing up, and re-making, and messing up. You spend six hours on something that takes four minutes on screen, and it’s hard not to be discouraged, but it’s nice to have someone tell you ‘Oh, no, I’ve been through it. It happens!’ ”

While both women laughed when I asked for their sense of the Houston “puppet scene,” they say that although a few years ago that question wouldn’t have even made sense, nowadays, there’s a consistently supportive audience and a desire for new works.

Joel Orr, artistic director of Bobbindoctrin, had a similar reaction to the question. Like Hopkins in Austin, when Orr began performing puppet shows in 1989, he was the only one. Orr explains that he became a sort of “accidental puppeteer” through an interest in playwriting and because no one was doing the kind of art he wanted to see. Orr described the experience of working on this month’s re-mount of Danse Macabre (a show Bobbindoctrin originally produced ten years ago), as “an archeological dig through my own brain.” 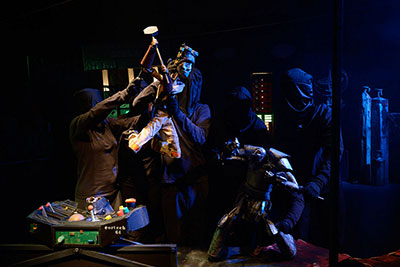 The show, a collaboration between Bobbindoctrin and Two Star Symphony, emerged out of a strange creative symbiosis. Two Star’s cellist Margaret Lejeune had been given one of Bobbindoctrin’s puppets to hold on to; since they didn’t know each other at the time, Orr recounted, Lejeune lived with “this very creepy looking puppet for a while,” which inspired a song called “The Marionette” (one of the pieces in Danse Macabre), and the music, in turn, inspired Orr to write a script. Orr describes the show as a story “about the isolation of death, and the idea is that in lack of all other companionship, death is always there for you…and it’s a comedy.”

That seems to be the trend with most of these puppeteers: Tackling issues of death and destruction with a smile and a laugh. As Orr put it, he creates the kind of theater he wants to see—shows that have “the kind of humor that makes you laugh and then immediately feel bad about laughing.”