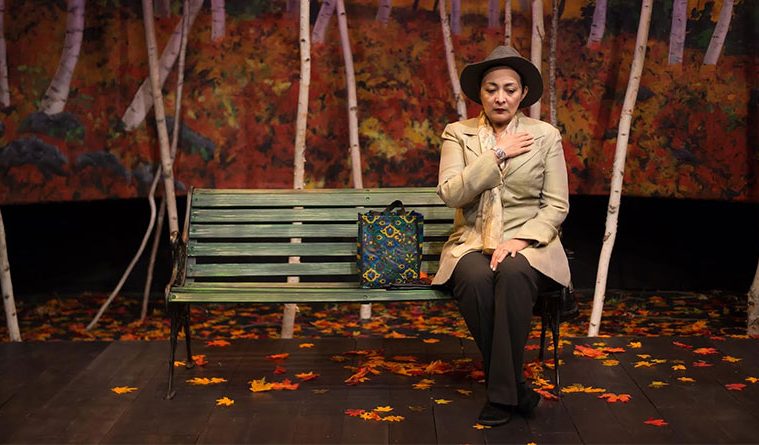 Lisa Tejero in the Upstream Theatre production of De Kus (The Kiss).
Photo by Peter Wochniak. 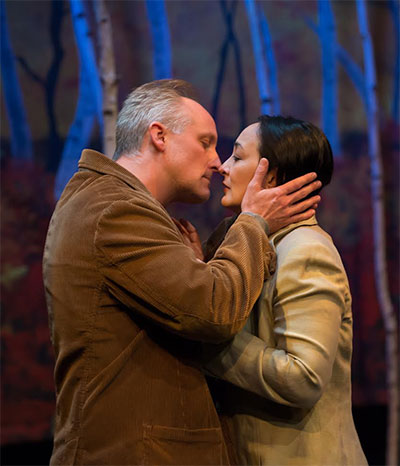 Eric White and Lisa Tejero in the Upstream Theatre production of De Kus (The Kiss). Photo by Peter Wochniak.

A woman takes a walk through the woods. She travels with a destination weighing heavy in her mind, an appointment to keep, yet along the way she meets a stranger by happenstance and everything changes. So begins the story of De Kus (The Kiss) by Dutch playwright Ger Thijs, making its regional debut at Stages Repertory Theatre, Oct. 12-30. The woman and man, who are given no names in the play, begin a journey together, but the journey The Kiss took to get to Houston is almost as remarkable and filled with strange poetic coincidences as the story itself.

I recently talked with Stages artistic director Kenn McLaughlin, who directed the U.S premiere of The Kiss at Upstream Theater in St. Louis, and now brings the acclaimed play to Texas. Only a few minutes into our discussion, I realized how enamored the director had become with the play, these characters and their walk that becomes much more than a simple stroll through the woods.

McLaughlin would only describe a few plot and character details because the unfolding of the play becomes so vital to the audience experience. The woman is on her way to see her doctor to receive test results, and the stranger she meets along the way is a failed comedian contemplating his life choices.

“As the layers are pealed back, what you learn is that these two wonderful people are at a crisis moment in their lives, contemplating their morality and looking back at their skills as parents and on their marriages,” described McLaughlin, before explaining the meaning he believes lies at the core of The Kiss. “Overall the play is a meditation on the roads we take, and how they lead us to unexpected places. It’s the whole metaphor, the journey into the woods and how it impacts everyone around us and our lives.”

But how McLaughlin became entangled with this Kiss is a story onto itself that involves the meeting of two artistic directors after a bird sighting, a Stupid Fucking Bird to be exact. In 2015, McLaughlin’s production of the Aaron Posner’s comic, sort-of adaption of Chekhov’s Seagull drew Upstream Theater’s artistic director, Philip Boehm, to a performance. Boehm, a Houston native, was in town visiting his ill mother at the time. After seeing Bird, he asked to meet McLaughlin and they became fast friends with Boehm inviting McLaughlin to come to Upstream and direct.

Upstream Theater holds a rather unique place in American regional theater, McLaughlin told me. “Upstream is known for doing primarily obscure, European work. They do mostly American premieres of the kind of plays that are not going to come to America any other way. That’s their signature, really avant garde, European, South American and Australian. Philip is great at turning over rocks and finding stuff that’s way out there,” he said

Boehm sent McLaughlin several scripts he was selecting for the Upstream season, but The Kiss drew McLaughlin in right away.

“I had gone through the end of life with my brother, who passed from cancer, and he was only three years older than I was. This play came into my life in a moment where these questions were really alive for me, and I fell in love with it.”

While all this discussion of mortality might lead audiences to at first think they will be seeing a dark, somber drama, McLaughlin is quick to describe The Kiss as a “very sweet and funny” play that explores the “interconnectedness of our humanity.”

“Some of the greatest plays we have look right into the abyss of our humanity and this play looks into that abyss but it’s very, I don’t want to say hopeful because it’s not an answer play, but something about it is quite gentle,” he said.

The Stages production of The Kiss will reunite the original Upstream actors Lisa Tejero and Eric Dean White and some of the creative crew, including scenic designer Michael Heil, who is also a professor at Texas Christian University. While McLaughlin is quite happy with the Upstream performances a year ago, he and his actors intend to go deeper this second time around, which will also be only the second time The Kiss has been produced in the U.S.

“We’ve gotten to a particular place with the play, and now we want to push ourselves into it a little more, psychologically, in terms of the fullness of the lives of the characters. We’ll go after that,” he said.

That deeper exploration might also include bringing the audience further into this journey with them, as McLaughlin said he and Heil will work on continuing “the feeling for the audience that they’re there in the woods with these people, that we’re all in the woods together.” McLaughlin is particularly excited about bringing one special audience member into the woods, as the playwright Ger Thijs plans to be in Houston for the opening.

The Kiss will be the first drama of Stages’ 2016/2017 season and McLaughlin feels it a thematically appropriate introduction to a lineup of theater that questions and probes.

“I think it’s a more reflective season. Plays like My Mañana Comes, Who Am I This Time Luna Gale and Liberty Valance, for that matter, this track of plays are all deep question plays, reflecting on who we are as a nation. They’re not particular political as much as they are communal, social questions. I think The Kiss starts us off by opening up, on some level, the courage to question, the courage to really look at ourselves.”