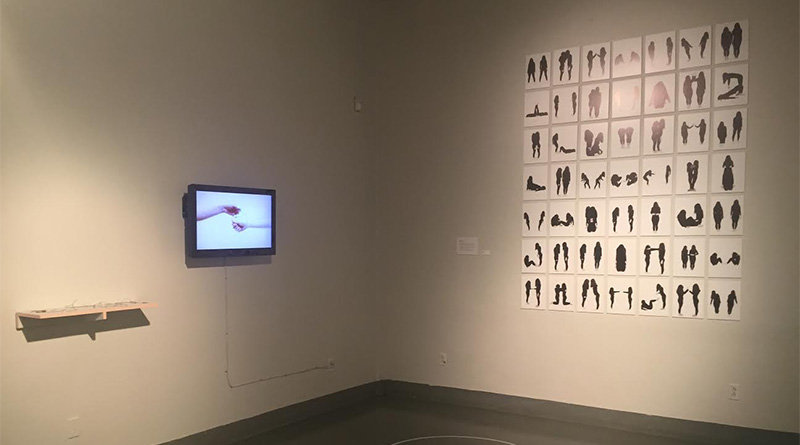 How might artists use their work to create connections across difference in these difficult times? Two shows currently exhibited at the Rubin Center for the Visual Arts at the University of Texas El Paso provide partial responses to this difficult question. The exhibitions are linked not only by their focus on the artistic production of women—particularly work with textiles—but also by their investigation into the perils and possibilities of connection in times of repression and violence along the U.S.-Mexico border.

Teresa Margolles’s We Have a Common Thread, through April 22, is an exhibition originally developed for the Neuberger Museum of Art in New York, and it has since traveled to various other locales, now including El Paso. The exhibit features six embroidered fabrics displayed horizontally on top of lightboxes that illuminate the fabrics from below in the middle of a blackened room, allowing the viewer to appreciate a range of textures and colors that otherwise would have been missed had they been hanged more traditionally on the walls. These cloths were made by six different groupings of women in six sites across the Americas: Panamá, Nicaragua, Brazil, Guatemala, Harlem and Ciudad Juárez, Mexico. Teresa Margolles asked these various collectives to embroider a cloth that had been stained with blood from people who had lost their lives in these same locales; many of the cloths were from morgues in the particular countries: fabric that was used to literally wrap the cadavers. These fabrics are paired with six videos playing on television screens in an equally blackened room; each video features footage of the different collectives embroidering their cloths as interviewees from each country tell stories that pertain to issues of violence, loss, community and identity.

One of the embroidered cloths and its paired video were made collaboratively with an organization of Rarámuri (Tarahumara) indigenous women in Ciudad Juárez, across the border from El Paso. Their embroidery work features a circular design with doll-like figures wearing the colorful, flowery patterns worn traditionally in Rarámuri communities. The video highlights the women as they work in these same billowing dresses, and the voiceover narrative speaks of the drug trafficking and impunity faced by these indigenous communities in their villages high in the mountains of Chihuahua state; another voice on the video stresses the importance for Rarámuri women of continuing to wear traditional dress, despite discrimination and pressure from employers at maquiladoras. It is especially poignant and relevant to see this work in El Paso, mere miles from where the Rarámuri women completed the embroidery work.

The curators at the Rubin Center—including director Kerry Doyle—are to be commended for pairing the Margolles show with Tangential Intimacies, an exhibition of contemporary artwork by seven younger female artists who all have ties to the El Paso-Ciudad Juárez border zone. This exhibition was curated jointly by staff from the Rubin Center in conjunction with the El Paso-based Honeyguide Gallery. A number of these artists—particularly Jane Terrazas (a.k.a. Mustang Jane)—have created work that enters into a dialogue with the same themes found in Margolles’s haunting exhibition: violence, connection and community-building in the face of dire conditions.

In Voces que importan / Voices That Matter, Jane Terrazas presents a textile and video piece in which delicate embroidery work on six wooden hoops has been hung from the wall with a flat-screen television positioned between them. Each hoop appears to have a bit of language embroidered into it, but the word is reversed and partial, presenting a degraded mirror image of whatever word may have been sewn originally. This mysterious illegibility creates another layer of questions about representation: where did these fabric bits come from? Who made them? A hint to an answer is provided in the video, in which six young girls speak (in Spanish and without subtitles) about violence and disappearances of young women, as they sit on a covered basketball court in what looks like a school in the middle of the desert. The young girls’s speech has the characteristic lilt of residents of Ciudad Juárez, and their conversation centers on daily iterations of violence, far from the headlines of national or international media: a young woman who was raped nearby with her mother, a girl who disappeared from the school recently. They tell these stories in a matter-of-fact way without sentimentality, as they shift or smile and laugh awkwardly. A full range of emotion is on display and it is unnerving to see how these young women talk about the violence that has surrounded them as they have grown up. It has been more than twenty years since feminist activists in Juárez began to speak out about the on-going femicide in the city. These girls have known no other reality.

Another series of pieces by Haydee Alonso uses jewelry and metalwork to think about connection and lack of connection between individuals and across borders, whether the boundary between one body and another, or the walls separating El Paso from Ciudad Juárez. Alonso perches the actual jewelry pieces on a small shelf, where their geometric loops and coils and circles seem fragile and delicate. Alonso also presents a grid of 49 photographs of two women dressed in black with their long hair covering their faces in a variety of positions as they variously touch or not touch, while always joined by the jewelry. The piece that impacted me the most though was a quiet video of two hands coming together in the screen to touch and to move the jewelry pieces from one hand to another. These simple gestures of exchange are poetic meditations that provoke reflections on reciprocity and transfer: how we give gifts, how we greet one another and how we interact across the boundaries between one person and another, and more metaphorically between nations or cultures.

In the video and textile work by both Margolles and Terrazas, there is a sense of closeness and quiet emotionality, a certain smallness of gesture that is arresting. Though the violence continues, both of these artists have wagered an attempt to engage across lines that otherwise might only divide.