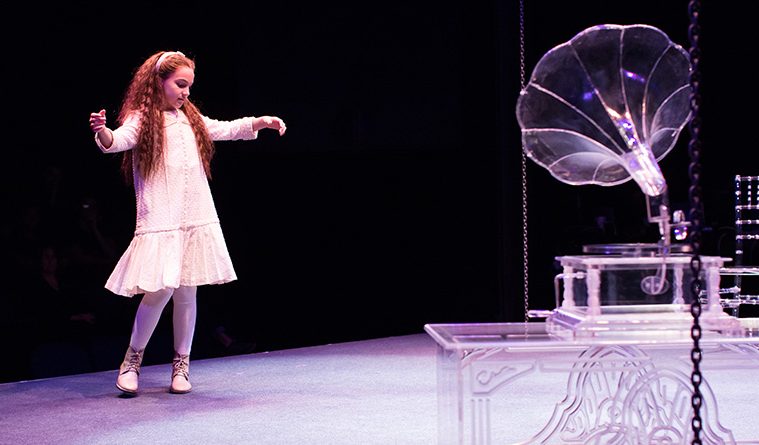 Jemma Kosanke as Iris in the Alley Theatre’s production of The Nether.
Photos by Lynn Lane. 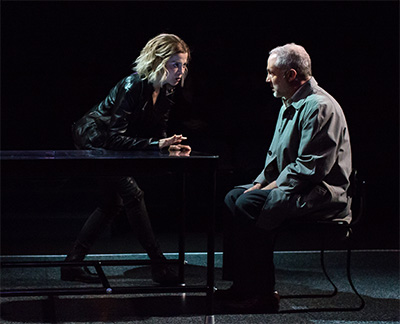 Josie de Guzman as Morris and Philip Lehl as Doyle
in the Alley Theatre’s production of The Nether.

A cop and suspect stare at each other from across a table in a stark and claustrophobic interrogation room. These first moments of Jennifer Haley’s The Nether at the Alley Theatre (Through May 29) reveal a setup we’ve seen before on a thousand police and procedural shows. Even the jaded Detective Morris (Josie de Guzman), attempting to intimidate a confession out of the the seemingly banal businessman Sims, played by John Feltch as an intelligent and self-aware monster, could be characters from any rerun of Law & Order. Yet that sense of comfortable familiarity we feel, because we’ve seen it all that thousand times before, as we watch even the most lurid crime drama unfold on our televisions, is distinctly absent from the intimate Neuhaus Theatre. Anxiety, instead, permeates the house as we endure an at-close-range confrontation with the beautiful and horrific consequences of human imagination.

Consequences, or the lack thereof, is a concern of many the characters in The Nether’s dystopian future, where the real world is a color and treeless place and the delights of life seem to only exist in virtual realms. We soon learn that the crime Sims stands accused of, running an upscale child brothel for pedophiles, hasn’t been committed in the physical world but in the online world of the Nether. If no real children are involved and if all heinous acts are virtual, has a crime been perpetrated? Morris, a detective in Nether’s shadowy investigation and enforcement squad–essentially an cyber cop–believes it has.

Though futuristic in setting, Haley and co-directors Gregory Boyd and James Black seem to intentionally ground The Nether in many of the trappings of a well-worn detective story. Most notable is a fractured time sense. The play begins mid-interrogation and then intercuts the war of wills between Morris and Sims with flashbacks to the investigation that brought them both into that room. 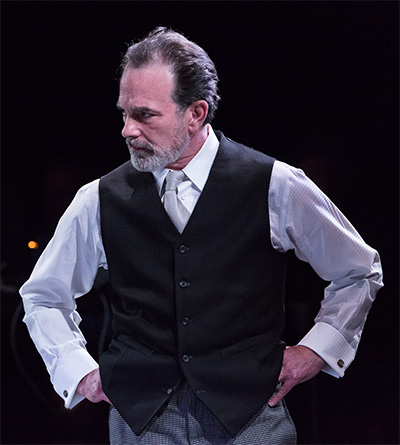 John Feltch as Sims in the Alley Theatre’s production of The Nether.

Boyd, Black and scenic designer Kevin Rigdon ingeniously delineate between present and past, real world and virtual with the use of a second stage that lowers from the ceiling to become the Hideaway, Sims’s created world. Inside, we find Iris, a lovely preternatural child, who lives and exists only for Sims and his clients. It’s not readily apparent who or what she is, an avatar for a real person or a computer program becoming sentient, but as played with vulnerable wisdom by the real, and really young actress, Jemma Kosanke, it’s difficult to keep our anxiety for her safety at bay as the level of creepiness rises.

Guzman, Feltch and Kosanke are all outstanding in the central roles of the story, but it’s Chris Hutchison as Woodnut, an undercover agent inside the Nether and Philip Lehl as Doyle, a theoretical physicist, who has come to think of the Hideaway as his preferred world, who audiences should observe closely. Both actors have the trickiest performances to convey as The Nether spins its twists and secrets.

Good science fiction will explore a plethora of contemporary issues within its futuristic human drama, and The Nether does this, all in a short 85 minutes, as it questions the technological uses and abuses of imagination and the limits of privacy when virtually sharing the beauty and horrors of our minds. Yet in the end, as characters force each other to shed layers of identity, perhaps the story boils down to a most ancient question: what would one soul do to be loved, and what if the price of that love was one’s own soul?

The Nether deeply disturbs, and not even strong performances and direction tempt me to dive back into this theatricalrealm anytime soon, but I’ll still be thinking about Haley’s imagined characters for days to come.