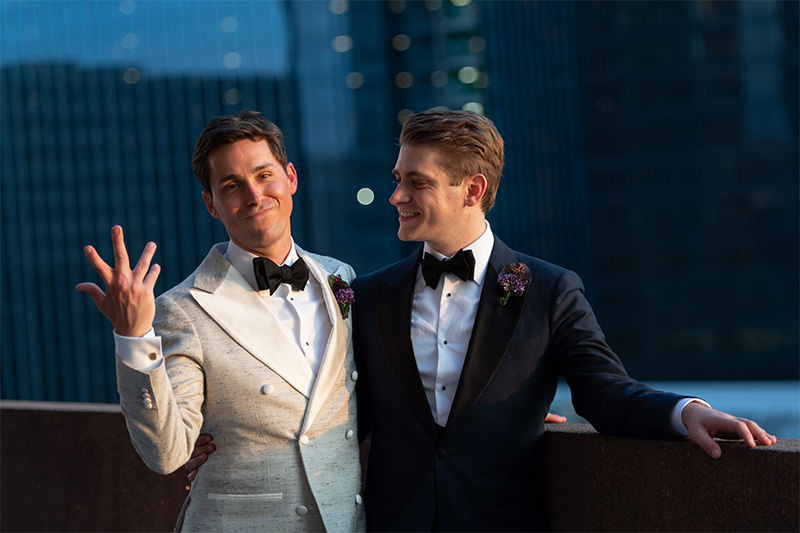 Five years ago, Arts and Culture Texas profiled a group of millennial theater artists striving to find creative roles for themselves offstage and to bring an innovative and fresh perspective onto Texas stages. Since then, two of those “Next Gen Leaders,” Brandon Weinbrenner, artistic associate at the Alley Theatre, and Mitchell Greco, artistic associate at Stages Repertory Theatre, have not only steadily risen to directorial prominence in Houston, they’ve also managed to carve out a personal life and marry each other.

While the spouses have the exact same title at two of Houston’s largest theaters, and both direct for their home company as well as for others, their different directorial preferences keep them on separate stages, both physically and metaphorically. Greco keeps mainly to musical theater, but he’s helmed shows that run the gamut of styles from the silliest crowd-pleasers, like Xanadu at Stages, to the warped classic, Rocky Horror Show, which he directed for Theatre Under the Stars. Weinbrenner has so far only directed plays, but also seems to prefer a variety of genres, from the comic thriller Venus in Fur to the Tony-winning post-9/11 drama, The Humans.

I recently sat down with the offstage duo to see if their very different directorial styles had anything in common. While their directing and artistic assistant schedules usually vary, they had each just finished directing one show to dive immediately into another: for Greco, Little Shop of Horrors followed by Murder for Two at Stages, and for Weinbrenner, The Humans at the Alley then The Royale at Rec Room.

Throughout our discussion, they professed how different they are, but it became quickly apparent that they share core philosophies on the roles and responsibilities of directing, even beginning with the basic question of what a director does.

“The artistic leader of the entire production,” defines Greco. He also uses the word “facilitator,” though seems hesitant to offer it as the exact description. “I’m here to pull all these disparate parts together into a focused production.”

“It’s the person who shapes what the production is. You start off with a script. That’s your blueprint, but how are you going to make the script come to life? It’s all about someone who creates the through-line for the entire piece. You’re the artistic leader of every choice.” offers Weinbrenner.

Both begin with the script, the playwright’s story, and then ask themselves a question, but they come to that question from opposite directions.

“I try to boil it down to a question the show is trying to answer, to help me focus. If the play is worth its salt, it will have answered that question,” says Greco, giving the example of tackling Little Shop, when he decided the intrinsic question was: “How far will you go to succeed?”

Greco says he’s often inspired by images or pieces of pop culture and personal experiences. For Little Shop it was a strange mix of The Twilight Zone paired with a historical tour of the Lower East Side he and Weinbrenner took the last time they were in New York.

Weinbrenner, in contrast, begins with the more general question: “Why is it worth somebody’s time to come see this show here and now? What are we trying to say collectively as a group of artists?”

But while discussing his process and the why questions he found in his last two plays, Weinbrenner comes to the realization that many times the plays he directs boil down to a central fear woven into the script.

“For our actors it’s representing each person, all the different generations, the point of views that come into who populates our country now and what are our deep down fears,” he finds for The Humans, while in The Royale: “Never forget that the plight of a certain group of people boils down to fear.”

Even the one-man comedy Buyer and Cellar, which he directed at Main Street last summer, contains that universal “fear of a monster boss.”

“Maybe it’s my fear that’s my approach to everything,” he muses.

Fears and central questions aside, both men also emphasize the idea of director as collaborator.

“It’s a collaboration that for me starts with designers and scenery. Then we all come together as a creative team, to talk about the play and how different elements work together,” explains Greco, who sometimes has to also meet with himself, as he choreographs many productions he directs. Weinbrenner agrees that meeting with the design team inspires much in the production, but Weinbrenner looks to costume and sound for inspiration while Greco begins with scenery and lighting.

The pair has different projects but similar schedules for the 2019-2020 season. They’ll both direct the alternative holiday show at their home theaters, Miracle on 34th Street: A Live Musical Radio Play at Stages and Fully Committed at the Alley, which led our discussion to the tangential argument as to whether Die Hard is indeed a Christmas movie.

In the new year, Greco will direct Honky Tonk Laundry, the inaugural show in the Warehouse Stage of the new Gordy campus, while Weinbrenner directs Dead Man Cell Phone in the spring. The couple teasingly throw a few insults while offering serious praise for each other’s work, but both insist the future does not hold a working collaboration.

“I think it would be a huge mistake to work together as directors. We’re just so different,” says Greco, noting that’s also perhaps why they’re not competitive.

Weinbrenner agrees, but says that off duty, they do talk shop.

“I absolutely learned things from watching Mitchell go through his processes in shows and seeing his work on stage. I’ve learned so much from him. I think we learn a lot from each other,” says Weinbrenner.

And while some relationship gurus might say a key to a healthy marriage is having separate interests, the guys seem to draw energy from knowing each other’s spheres so well.

“It’s easy to support Mitchell and to go to everything he’s doing because it’s the world that I love too,” says Weinbrenner. “We’re so lucky in that the thing that we have most in common, theater, is the thing the occupies the majority of our time. The luckiest thing about being with Mitchell, besides Mitchell being Mitchell, is that his career is in the theater, as well.”