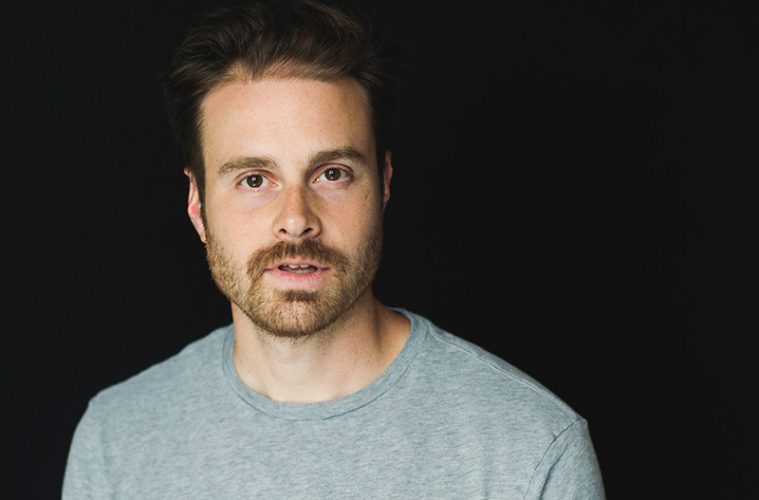 When Matt Hune, artistic director of Houston’s Rec Room Arts, talks about his role as a theater director, he speaks of perspective, space, color and texture, words that seem more the purview of the visual artist than the vocabulary of someone audiences might imagine as that mysterious person behind the scenes bossing about all the actors.

Yet for Hune, perspective becomes key, whether he is putting a 90- minute adaptation of Engelbert Humperdinck’s opera Hansel and Gretel into a 600-square-foot backroom or staging playwright Ike Holter’s realistic, contemporary drama Exit Strategies. He speaks of perspective in an interpretive sense, in conveying the playwright’s story to the audience, but also in a visual, artistic sense, as he works to paint a dramatic world into a set space. 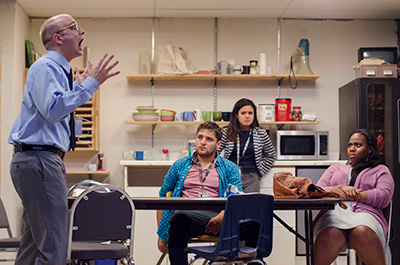 “Space, color, smell, sound: I feel like I’m very affected by that,” he explained in a recent conversation on the art and craft of directing. He is one of Houston’s youngest artistic directors.

“As a director, I love starting with limitations,” especially of space, he says. When staging dance, traditional plays or opera, he begins by asking: “How can we pare down this massive thing and put it under a microscope? That gives me freedom to begin because I know these are the rules that I have to play with.”

Much of Hune’s directing experience in Houston has involved playing with restrictions of space. Along with Hansel and Gretel, Hune also directed a riotous and revelatory adaptation of Rite of Spring, choreographed by Laura Gutierrez, in their tiny Backroom.  A few years before partnering with Rec Room co-founder Stephanie Wittels Wachs, he gave Houston the Living Room Series, a season of scripted contemporary plays staged in his living room for an audience of 25.

Since he has very little music background, Hune says he relies heavily on collaborators like Gutierrez or Hansel conductor Mark Buller when directing dance or opera, yet he goes back to these fundamentals when staging any performance.

“I approach it in the same way, as spatial relationships, asking: where are we? What’s going on? What’s this moment about and how can we bring it to reality?”

Hune also thinks of space metaphorically when bringing together all the actors and designers to create a performing artwork.

“I feel like being a director is allowing space for each artist involved in theater to bloom and go as far as they can go,” he explains. “I found my job is putting the right people in place to make the script happen and making sure moments are clarified.” 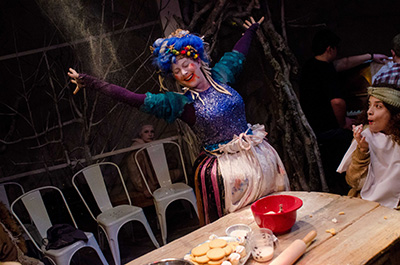 Raised in Houston, Hune went to the High School for the Visual and Performing Arts, where he now teaches. He moved to Chicago after graduating to attend theatre school at DePaul University. In Chicago, he discovered the power of space, especially small spaces.

“What I knew about theater in Houston was that it had to be big. It’s got to be the Alley. And the Alley is great at what they do, but that’s not all theater. Really good theater can also be these quirky, weird, smaller, different spaces,” he describes, adding that now he tends to gravitate towards small or “huge” spaces, though he hasn’t had much chance to play in large houses.

In Rec Room’s 2018-2019 season, Hune directs three shows. Exit Strategies began the season. In December, Rec Room brings back 2017’s hottest holiday show ticket, Hansel and Gretel. Hune moves it into the 1800-square-foot main theater with a new configuration and intriguing casting changes, an all-female cast with the exception of a man playing the witch. Hune also directs the season ender in July 2019, a new adaptation of Georg Büchner’s Woyzeck, a favorite of theaters wanting to experiment, as the playwright died before he could complete it.

Hune says his background as an actor, who occasionally still performs, also influences his approach to his work as a director, whether traditional, scripted works or adapted pieces like Hansel and Woyzeck.

“My actor training was all about impulse. What’s the impulse? What are you getting in the moment while you’re on stage? I feel I’m like that when I direct,” Hune describes, noting that while he approaches a new project having done plenty of research, he doesn’t “pre-stage” before rehearsals.

“I want it to be an organic discovery,” he says for both himself and the actors. “I try to let that be an actor-driven process.”

Hune also draws connections between directing and teaching, asking questions to help student, designer or actor to “find it themselves,” and reach a deeper discovery.

“I know the way I want it to be, and then the actors find it and then they go even further and further, and it’s so much better than I could ever imagine it,” he says describing that moment of teaching and directing epiphany.

“They’re the boss of the artists in a way,” he muses, when I asked how he defines the role of theater director. “But like any good boss it’s about allowing the artist/employee to do their thing, to give them space.”