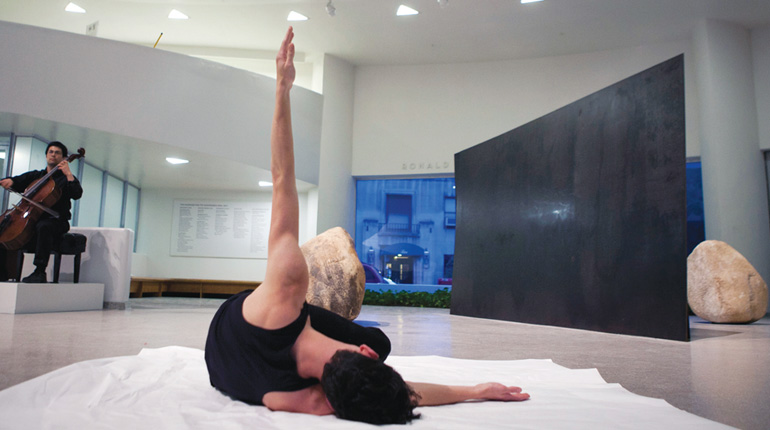 For some, dance’s ephemeral quality is a problem. For Jonah Bokaer, it’s a choreographic challenge that drives the engine of his work, and often poses questions of time, space, objects, and the body.

In Bokaer’s On Vanishing, a site-specific choreographed work, originally created for the Solomon R. Guggenheim Museum in response to the exhibition Lee Ufan: Marking Infinity, Bokaer ponders, “How does the body erase itself to prefer matter against presence?” An interesting inquiry for a choreographer/dancer who has an impressive presence as a dance maker and collaborator with leading visual artists.

As Bokaer is a master of reengineering performance space, On Vanishing will be recreated for the recently opened Asia Society Texas Center, in response to Relatum-signal, a commissioned sculpture by Lee. The performance, sponsored by Houston Arts Alliance, is presented by the Asia Society in collaboration with the University of Houston Cynthia Woods Mitchell Center for the Arts, and part of Bokaer’s residency at the Mitchell Center.

Bokaer, an internationally known choreographer and media artist, stands on the forefront of dance and technology. He has danced with such seminal artists as Merce Cunningham (2000–2007), John Jasperse (2004–2005), David Gordon (2005-2006), Deborah Hay (2005), and Tino Sehgal (2008), among others. He’s also a frequent choreographer for Robert Wilson.  Wilson is named one of the New York Times “Nifty Fifty” and Crain’s New York Business “40 under 40,” and has received numerous awards and is involved with the founding of New York’s two leading arts incubators, Chez Bushwick and the award-winning Center for Performance Research. This summer, he returns to Jacob’s Pillow Dance Festival to perform with ballet legend David Halberg.  Lucky for Houston, his ties to the Bayou City continue through the Mitchell Center.

I first came upon Bokaer’s work when he was performing The Invention of Minus One at DiverseWorks. My response to his work was immediate and profound. Bokaer’s work challenges our perceptive muscle at every turn, whether he’s deconstructing movement or the way we see and experience a performance. What proved most curious was that the work did not lose an ounce of its impact on my laptop screen.  This makes perfect sense when you consider Bokaer’s rather expansive approach to where he performs.

Bokaer relishes in giving up the controls of the black box by performing in museum settings. “Museums and galleries tend to be more nimble and agile,” he says. “They implicate the body differently. We can directly address the audience as the 4th wall is broken.”

Bokaer is a heady artist, who thinks about the exact elements of his work with the cunningness of an engineer, philosopher and scholar. On Vanishing allowed him to dig deep into some of the differences in methodologies between choreography, visual art, and dancing. He sets “opposing the act of vanishing” as a working question. “Not only are choreographic works endangered, it’s an occupational hazard, but in a single dance, each moment passes.” Bokaer says, “I wanted to decouple choreography from dancing. Dance is easy to repeat, choreography is the design. The design disappears to become a performance.”

On Vanishing begins mostly in stillness with music. The audience has time to acclimate, to literally take in the body as object, before it becomes a moving object.  “I wanted the music to command attention, and for the audience to look a still space,” he says. “There’s a leveling of the elements.”

Bokaer’s approach often dismantles previously held convictions in our perception of the body in motion. Every piece is a lesson in seeing. “How is the body choreographed by the material around it?” asks Bokaer, during our recent conversation. And those materials can be stunning, such as 10,000 ping pong balls in Why Patterns, his collaboration with the design firm Snarkitecture, or his investigation of a collapsing cube in Replica with Daniel Arsham.

In On Vanishing, he uses Daitoku paper in a section that references Lee’s 1969 performance installation, Things and Words, for which there remains little documentation. The dancers take and leave shape in the paper. “It’s very sculptural,” adds Bokaer.

In this version of On Vanishing, Bokaer will consider the entirety of the Asia Society Texas Center’s container and the proximity to Ufan’s new installation. One major difference for the Asia Society performance is that the dance will not occur in the same space with Ufan’s work, offering yet another level of vanishing. It’s not a problem for this protean artist. “The public will walk by Lee’s installation before arriving in the adjacent performance space,” says Boaker. “The piece will be more like an echo.”

Unlike much of contemporary dance, where our vision is directed with a “look here” order, Bokaer offers a more spacious experience. Our gaze is less constrained, we are free to wander among the work’s disparate elements, much like we do in a museum. Vanishing is rarely this substantial.