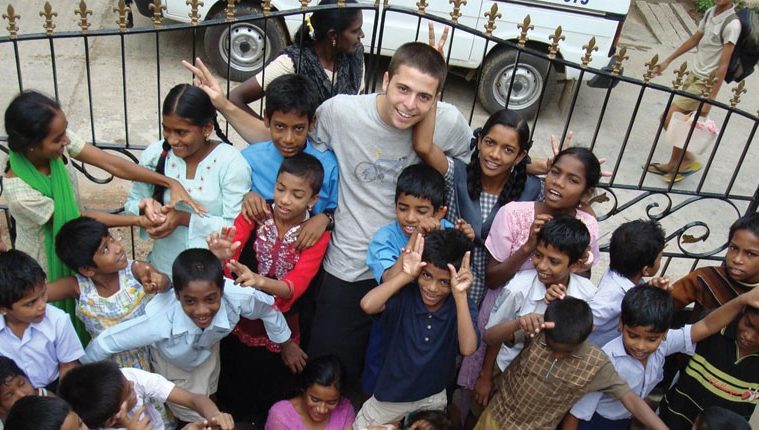 Thin Line Film Fest is Texas’ International Documentary Film Festival held annually the second week of February in downtown Denton, and is the only documentary film festival in the state to screen more documentaries than the bigger SXSW in Austin. For eleven days a diverse program of high quality, relevant documentary films culled from hundreds of submissions will screen at various locations in the city located north of Dallas, off Interstate 35. Some films will come straight from their debut at Sundance, including the Opening Night feature, Blood Brother, from filmmakers Steve Hoover and Danny Yourd, who will be in attendance.

While Joshua Butler, Festival Director, is quick to point out that documentaries too often don’t get the love that is deserved in the world of filmmaking, nevertheless, this year’s Thin Line Film Festival received 300 submissions from over 24 countries. In addition to submissions, Butler says he and his colleagues also watch dozens of films from around the world in an effort to invite as many filmmakers as possible to screen at the festival in Denton, this year scheduled February 8-18.

A+C: Tell me about the Thin Line Film Festival, what’s it’s all about?

JOSHUA BUTLER: This is our sixth festival. The judges are different for each category and this year for features we have Bart Weiss (Dallas Video Fest), for Shorts Sarah Harris (Senior Programmer at Dallas International) and we also have someone from the community for each additional category.

A+C: What makes this festival stand out and how did it get started in Denton?

One way we stand out is our willingness to screen any film that adheres to the style of documentary. We encourage the submission of docufictions, docudramas, animated documentaries, mockumentaries, etc, and we don’t tell our audiences which films are “fake.” I personally believe that all documentary films are fake to a certain extent. They are a contrived piece of art, a pieced-together version of real life. Some documentaries do a better job than others at giving the appearance of reality, but all filmmakers use the power of editing, music, color effects, and more to make the audience feel a certain way.

The making of a new album from band Snarky Puppy’s is the topic of a new documentary showing at Denton’s Thin Line Film Fest.

A+C: What is your opinion regarding the fact that often it seems documentaries are the unsung heroes of filmmaking?

It is true that documentaries don’t get the same amount of love and attention as fictional films. The lowest common denominator for media is sex and violence, and those two things are difficult to achieve in a documentary, although some have tried. Humor aside, documentaries tend to be very topical. Then you’re dealing with a genre within a genre and your audience gets more and more narrow. The documentaries that achieve success are first and foremost entertaining. The average person consumes media to be entertained, so to be successful the film must capture a portion of that audience. Then the film must inform the audience of something we didn’t know or maybe have always suspected.

A+C: Why do you think a festival of only documentaries is important?

We are the only documentary film festival in the entire state, and it’s a big state. There are some big film festivals in Texas, but none screen more documentaries than Thin Line. That alone represents tremendous potential for the Dallas/Fort Worth area.

A+C: What do you think really makes a documentary stand out?

The film has to be entertaining. I want to be engaged in the story and in the characters. If I learn something along the way it’s a big bonus. Plus, I really like documentary films that push the boundaries of the genre, essentially taking real people, locations, and stories and crafting them in a cinematic way to create a more engaging version of real life.

A+C: Anything new you have seen lately?

Every year is different and there are always surprising trends. In some years we will get a lot of environment films, and one year it was a dozen different films about being gay in the military. Technology is advancing so fast that the overall quality of films is improving. Filmmakers can easily bring super high-res cameras to far-away places making for better-looking documentaries. Ultimately, the best stories win.

Premiering at Sundance and making its Texas Premiere at Thin Line, Blood Brother is the story of a man who, when the film opens, lies sweating on the floor of a concrete hut in India. He has just returned from America, where Visa issues forced him to stay for two months. The children he spends his days with fight hard issues, but he shows them another side of life.

Brothers on the Line is a documentary feature exploring the legacy of the Reuther brothers, labor and civil rights champions, whose leadership of the United Auto Workers (UAW) union transformed the social, economic, and political landscape of a nation. Comprised of never-before-seen footage from the UAW internal archive with first-hand accounts and narration by Martin Sheen.

The premiere of Snarky Puppy: Ground Up about a band of the same name and the production of their latest album “Ground Up.” The band honed their craft in Denton and now they call New York home.

Filmmaker Eugene Martin documents a journey that began when his daughter Sophie decided to play soccer in their neighborhood. This led to his finding the story of a soccer team called The Monarchs who were the only all-girls African American soccer club in the US.

An intimate and personal film, In No Great Hurry follows photographer Saul Leiter as he deals with the triple burden of clearing an apartment full of memories and becoming world famous in his 80s.