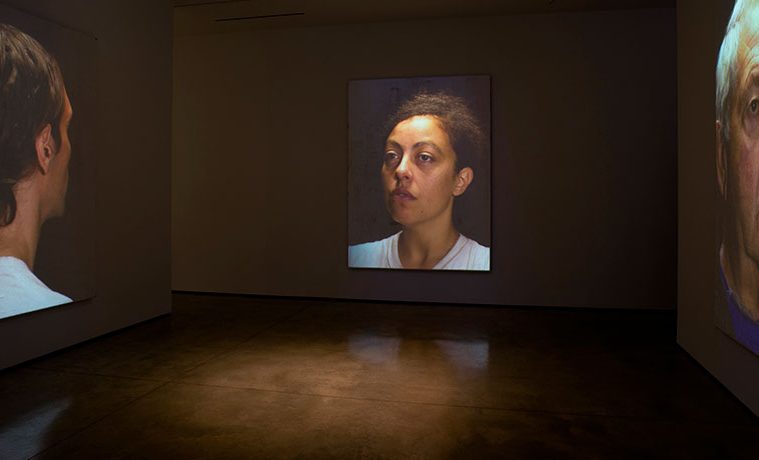 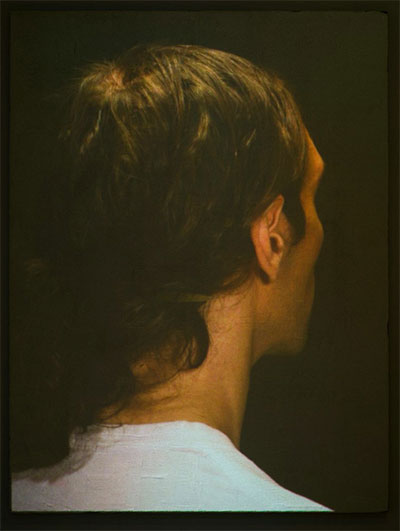 In the exhibition text of Donald Moffett’s solo show, head., the artist’s works are described as collapsing “the tropes of painting, video, photography, and sculpture into a single new form of portraiture.” This alludes to the physical nature of Moffett’s works, but perhaps a better explanation of the emotional and intellectual impacts of his projection paintings would be describing them as a cross between people-watching at an airport and viewing a classical oil in a dimly lit cathedral.

Moffett exhibits three single panel works and one diptych in the main space of the gallery. Each six by eight foot panel is painted with a pearly mix of thickly applied acrylic paint and fine glass beads which serve as a luminescent surface for projections of significantly larger than life rotating heads. In the setting of the dark gallery, and given the soft haloing effect of the micro beads, these works inspire a reverence for their very human subjects. There is no glamor here, no elaborate makeup or costume, just simple images of people as they are. The subjects’ earthiness is celebrated.

The video loops extend for several rotations of the subject, and in this way the subjects’ natural movements of breath, blinking, occasional eye contact, and in Lot 102714 (ed) brief muted speech, are also present. The figures are alive, often with some sense of fatigue, and varying levels of familiarity, comfort or discomfort with the process, and perhaps the artist himself.

Lot 102514 (jacqueline) and Lot 103014 (gwendolyn) exposes this most clearly given the viewer has access to a bit of backstory. The diptych presents identical twins in unsynchronized movement. Time has treated these older women in slightly different ways, but without context it would be easy to assume that they are the same person. More importantly, one of the twins has a longstanding relationship with Moffett as his studio manager. Her sister has no affiliation with him outside of this project. The difference in tension, in unexplainable nuances of facial expression, and the movements of eyes tells the viewer that these two people are responding to the experience of being filmed in very different ways. This diptych more than any of the other single panels highlights the head, and particularly the face, as a nexus of nonverbal communication, an open channel to the emotional complexities within. 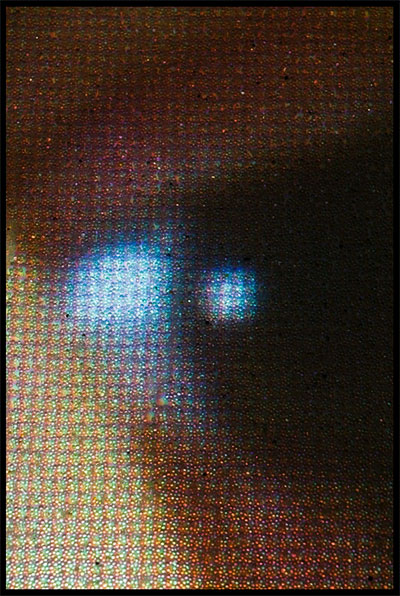 The amount of personality that can be gleaned from (or projected onto) these portraits is staggering given the systematic simplicity with which they are produced.  Lot 102414 (shaun) depicts a youthful studio assistant, who looks as though he’s been expecting this for some time. Lot 101814 (sarah) puts co-director of Skowhegan* artist residency Sarah Workneh in the hot seat. No foreigner to the stage or podium, Workneh’s wordless confidence borders on the confrontational. At times it feels she’s looking through you. Finally, Lot 102714 (ed) displays Moffett’s landlord who seems the most disengaged from the process, eyes half rolling with every blink, and a strange break with protocol as he at one point speaks to someone off screen.

Like the deconstructed canvases and sculptural paintings Moffett is more well known for, these projections stress the materiality of the material as much as the material’s function. Instead of strictly canvas, Moffett has done so with the head itself. Gifting the viewer with the material sensitivity of a sculptor, Moffett causes the viewer to be as interested in the physicality of the head — texture, color, the mark of time — as with the nuance of expression and apparent personality that this physicality conveys.

*Two current Austin exhibitions connect back to Skowhegan: Donald Moffett, currently exhibiting at Lora Reynolds, was a resident artist in 2004; and LaToya Ruby Frazier, currently exhibiting at UT’s Visual Arts Center, was a resident in 2007. She’s also listed as 2015 faculty for the program. It’s hard not to view Lot 101814 (sarah) without considering the way the subject can effect art scenes as removed from Maine as Austin.