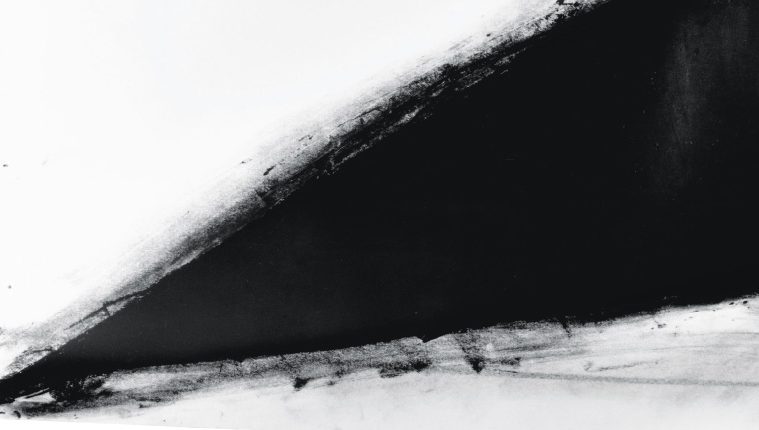 Drawing with Gravity: Richard Serra at The Menil

RICHARD SERRA IS ALWAYS IN the process of making. Over 35 years and 1000 square feet of black pigment fill the contemporary galleries of Houston’s Menil Collection. Organized by Me-nil curators Bernice Rose and Michelle White, “Richard Serra Drawing: A Ret­rospective” began at the Metropolitan Museum of Art in New York, traveled to San Francisco Museum of Modern Art, and concludes here in Houston. The drawings are a survey on Serra’s lesser-known media that prove as arresting as his steel sculpture. Walking through the exhibition, nothing rings more true than Serra’s own words, “There is no way to make a drawing–there is only drawing.”

In the hall of the Menil’s west wing are open sketchbooks under plexiglass. Housed like holy relics, Serra simply remarks that his sketches had “nothing to do with his larger works.” Despite the separation, Serra’s sketches are a foot­hold for most of the exhibition if for no other reason but to remind us that drawings are essentially marks on a flat surface: black material, white grounds, and lines of perspective. Serra’s art is a process.

The large drawings are generous: the subject becomes the space around the drawing — the subject is the viewer. Ser­ra was one of the first modern artists to fully take advantage of this dynamic on a grand scale within architecture, and the result is powerful. The viewer becomes the drawing and builds a relationship to the artwork through experience. Serra’s process enforces architectural change by creating form from matter as he explains during the Menil preview, “I believe in process, and I’ve always been involved with matter — matter brings form to form.”

In the first main gallery are early draw­ings Serra created after Circuit, his first groundbreaking sculpture. During this time he worked alongside Philip Glass and Jasper Johns; he remarked on the early seventies nonchalantly as when “I was moving furniture and making art.” Works done in his thirties like “Draw­ings after Circuit” and “Heir” feel timid and purposeful simultaneously. In “Un­titled”, 1974, Serra makes his first cut as line, a motif he comes back to in his later works. In these early drawings we see Serra, like Matisse and Cezanne before him, wrestle with the notion of perspec­tive, line, material, and form as he tries to reshape the concept and very history of drawing itself.

The second exhibition gallery features four early videos and Serra’s drawings from 1974 to 2011. Working from intri­cate models alongside curator Michelle White on the design and fluidity of the space, the end result is a masterful walk-through full of spatial surprises and immersing visuals. The gallery is broken up into four main series from oldest to newest bodies of work: “The Installation Drawings,” “The Diptychs,” “The Rounds, out-of-rounds, and Line Drawings” and “The Solids.” Masterfully curated, these galleries feel as if you are part of an invisible procession where time, space, perspective, and the subtle shifts of daylight lead you through turn after turn.

“I had an obstinate belief that what I was doing was relevant.” Serra quipped to over 60 onlookers standing in front of “Triangle,” the first large-scale installa­tion drawing on linen from 1974. Serra’s statement at the Menil preview tour incited laughter as he humbly smiled. In these early “Installation Drawings” works like “Triangle,” “Diamond,” and “Institutionalized Abstract Art,” we are face to face with first grade geometry. In 2011, during a talk on his retrospec­tive at the Met with museum consultant Magdalena Dabrowski, Serra remarks: “[Creating the large drawings] was the sheer joy of making, they got to be hys­terical…”

Hysterical, although a poignant adjec­tive for his early works, cannot encapsu­late Serra’s later and larger drawings. In “The Diptychs,” which were completed during the destruction of “Tilted Arc” in 1989, drawings like “No Mandatory Patriotism” and the “United States Gov­ernment Destroys Art” feel heavy. Over­sized drawings like “Taraval Beach” and “Blank” slowly change expected percep­tions and create an ominous atmosphere through solid darkness and sheer size. As Serra explains, “Blank”, “[the work] is going to contract the space, the weight shifts.” Unlike “Triangle” and “Dia­mond”, these monumental works along with “The Diptychs” recreate space in a more transformative way. Like giant ship hulls arriving at the docks, these later drawings exemplify Serra’s state­ment that “The media for understanding is time and memory.”

Richard Serra’s “Rounds” and “Line Drawings” from 1996–2002 are a tem­poral experiment Serra describes as “Letting gravity create the drawing.” In these pieces Serra pours melted paint-stick onto a table, laying a wire mesh or screen on top, and then transfers the pigment by pushing on to the back of a sheet of handmade paper. Serra explains that this technique “allows the process to express itself in the activity of mak­ing.” The high viscosity surface texture reduces rigidity and flatness by revealing the microcosmic nature of the material. These drawings reveal what Serra has written on his drawing surfaces, “Black is not a quality, it is a property.”

Flanking the sides of the final exhibi­tion space are two large black trapezoids spanning over 50 square feet each. Serra sums up the experience, “When you walk into the room the floor seems to move up…the entire room is the draw­ing.” Created in 2011 as part of “The Sol­ids” series, “Elevational Weight, Weight for Weight I & II” are like a hybrid of Stanley Kubrick’s monolith in “2001: A Space Odyssey” and Monet’s “Water Lil­ies” at the Musée de l’Orangerie. They are endless and singular — moving and unyielding. The drawing is experience, conjured by the tension between surface depth, perceived weight, and skewed perspective. I told Serra this installation was like being forced down a wedding aisle, Serra’s eyes widened in agreement, “I like that.”

“What artists do is they fulfill in all of us something we lack, so that’s what we try to do, we try to fulfill in ourselves some­thing we lack,” muse Serra. Therein lies a truth: Serra, even at his most poetic, is fundamental. Likewise, these draw­ings allow for spatial participation on a basic level. Walking into the Menil, we become conscious of how space is con­structed in real time and we begin to recreate our reality — like Serra, we too are in the process of making.

— DEBRA BARRERA
Debra Barrera is a local writer and artist.