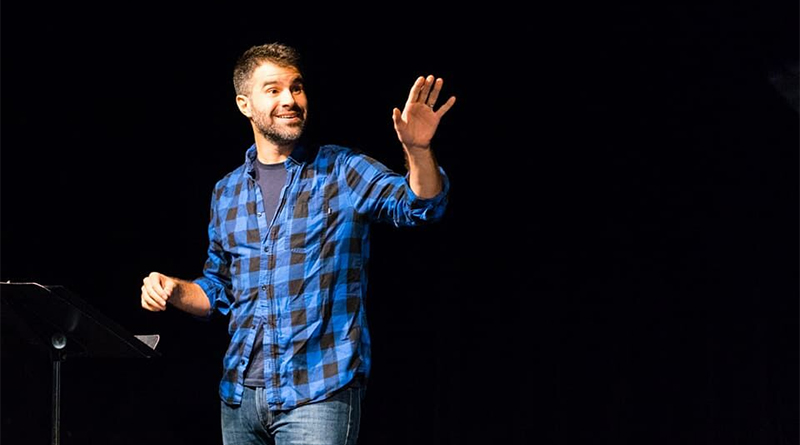 Bernardo Cubria in the staged reading of his play Neighbors: A Fair Trade Agreement, produced by Horse Head Theatre at MECCA. Cubria’s Neighbors will be performed as part of Sin Muros: A Latina/o Festival on Feb. 2 at Stages Repertory Theatre.
Photo by David Tong || Gettago Photos || Culture Pilot.

If good playwrights tend to have discerning ears for the language and voices around them, then perhaps those wanting to produce a new kind of theater festival need to become the most sensitive of auditory aficionado as well. Kenn McLaughlin, artistic director of Stages Repertory Theatre in Houston, seems to subscribe to this theory because when the company began organizing their new play-reading event that would become Sin Muros: A Latina/o Theatre Festival, he knew the first act of creation was to be quiet and listen.

Before it had a name, Sin Muros began as an idea for a reading series of new work by Texas Latina/o playwrights, but over the past year, some of those initial conceptual walls have fallen, as a full-on theater festival emerged.

But before a fest could be born, McLaughlin knew a lot of listening had to happen.

“When you’re talking about connecting a community to what it is you want to do and you’re not necessarily known to that community nor are you known for being a place where that community might feel particularly welcome, you must put down every thought about yourself. You must become a listener to community leaders and voices of the community,” explained McLaughlin.

One of the voices McLaughlin heard years ago that stayed with him was that of playwright and actor Bernardo Cubria. At the time, the young Latino actor felt he had to leave Houston in order to succeed.

“Kenn and I met over 10 years ago to discuss doing a Latino play festival in Houston. It was always an ambition of mine to bring the exciting Latino work I was seeing on stages in New York to my hometown,” remembers Cubria.

McLaughlin held on to the idea as Stages continued to produce Latina/o playwrights regularly as part of their main seasons, but he still felt that in Texas and especially Houston they should be doing more.

“We’ve made a commitment on and off,” explained McLaughlin of previous seasons. “But we needed to find the right time to make a full, sustaining commitment to this set of stories. That’s really what the project is about. Not only are we making a very clear statement that we will be producing work of Latina/o regional writers, but also to suggest that we will be advancing, as much as we can, the voice of Latinos from the region and writers whose voices have not always found their way into venues with resources we have.”

Part of the listening process was to set up a task force or steering committee to become the real organizers and producers of the festival, a committee that includes artists, scholars and leaders including Philip Boehm, Trevor Boffone, Bernardo Cubría, Josh Inocéncio, Jasminne Mendez, Laura Moreno, Ana Scuseria and Claudia Soroka.

“Kenn McLaughlin has been very proactive in recruiting local voices not just for the festival, but for the task force committee that I sit on,” described Inocéncio, adding, “It’s been a very empowering experience to both plan the festival and be a part of it with my play.”

Trevor Boffone, founding editor of the 50 Playwrights Project, and one of the earliest members of the task force, noted that as important as the play reading aspect of the festival is, they also wanted it to become much more.

“It was always three readings, and once that was cemented, we talked about what type of programming we wanted to build around it. A number of us were passionate about the workshops, to build community and so people could work on their craft,” describes Boffone of the process. “The idea was not just a one-off festival. The idea is to go slow and build audiences in different ways. We consider the poetry reading as important as anything else is. It’s getting people there that don’t typically go and building this trust.”

Boffone also noted that Stages hardly ever told them “no” and that they were allowed to do whatever it took to create their “dream festival,” something McLaughlin reiterates from a slightly different perspective, saying that the committee definitely did the steering.

Though the first festival has not yet taken its opening bow, everyone involved seems to already be looking towards the future. If they’ve worked to create their ideal festival on the first go around, some of the producers already have bigger dreams for the future.

“I think a state like Texas—with four large cities—should have more sustainable opportunities for playwrights,” described Inocéncio. “Houston, I think, is especially poised to be another Chicago-like theater city with an array of professional paths.”

For Cubria that future goes beyond what programs the festival will bring to city or to this one weekend in February.

“My dream is that the Latino community of Houston will see that theater is being written about them and for them. I dream of walking into a theater in Houston and seeing an audience that represents the racial makeup of the city of Houston,” he describes.

Though McLaughlin saw the beginning goal of the Festival to expand access “to Latina/Latino voices and building a larger audience,” he says that goal has expanded.  “Our goal is to be the Latino Humana Festival,” he says, referencing one of–if not the– most renowned new play festivals in the nation. He does know it will take time.

“We did not start there. What organically came through the work of the committee saying this is what we’re willing to fight for. We found our star. It’s not about Stages. It’s about the voice of these Latino artists and what they deserve in this country. If we can be the platform for that, yes.”