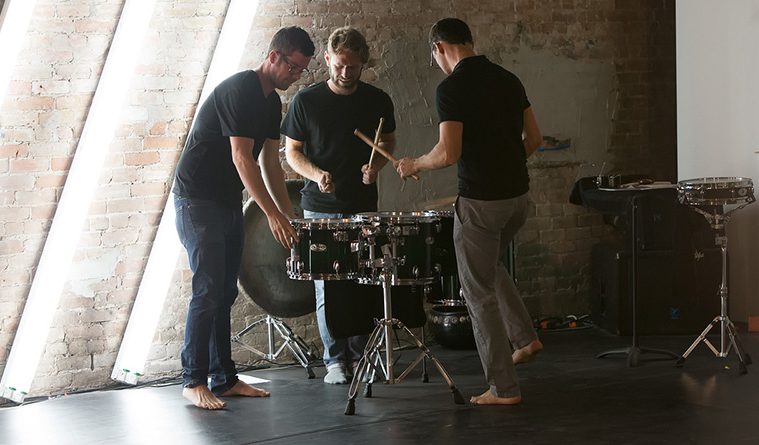 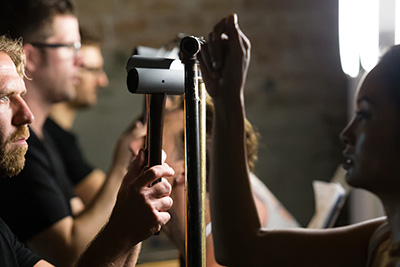 From woodwind trios to massive orchestras, most musical groups can prepare for a concert in a fairly straightforward way. The musicians put a score in front of them, pick up their instruments and start practicing. But it isn’t that simple for percussion ensembles–especially not if they specialize in new music.

To the creators of today’s percussion works, anything that makes a sound when you tap, rub or bang on it can be a musical instrument. Telling musicians how to play it may involve diagrams, charts or verbiage that have no relation to treble clefs and bar lines. Before percussionists can even begin to rehearse, they may have to hunt down paraphernalia and decipher the score.

“For one concert, I learned all about floor tile,” says Matthew Teodori of the Austin trio line upon line. “I was spending a lot of time in Home Depot listening to all different kinds of tile–and to how glazes affect the sound.” For another piece, he had to track down “just the right socket wrench.”

“We have a lot of those little things,” Teodori says. “But I wouldn’t have it any other way. That’s part of the fun.”

Teodori and two fellow UT Austin alumni—Adam Bedell and Cullen Faulk—recently began their eighth season as line upon line. Their trio produces its own Austin series, and it performs around the state thanks to the Texas Commission on the Arts’ touring program. Festivals and college residencies have taken the group across the United States and to England, Switzerland and Germany. It will come to Houston Community College for a residency in April. 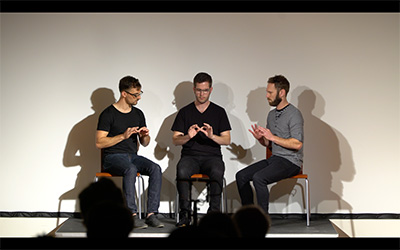 “Initially, we wanted to challenge the status quo. That’s still our mission,” Teodori says. He invokes an iconic 20th-century innovator. “John Cage has an awesome saying: He’s not sure why people are afraid of new sounds–he’s afraid of old ones. We’re kindred spirits that way.”

The new sounds in the trio’s next Austin program, Dec. 1-3 in Big Medium, will emanate in part from three modified snare drums composer Andrew Greenwald calls for in his [99 Words]. The drums’ bottom heads are gone, as are the snares that create the usual sonic sizzle. The players rub violin rosin on the top heads, which they rub and tap with their fingers, metal discs and glass balls.

The result? “Really wonderful sounds–very imaginative sounds,” Teodori says. “You get these sort of vibrato-type sounds from your fingers sticking on the head. And there are various kinds of rubbing sounds. There are rhythms as well. When you pick up your fingers, there are little pops from the rosin snapping off your fingers.” Wooden boxes, dowels and slats played separately add their own clacks and murmurs to the soundscape. In place of the proverbial thousand words of description, a video of the group playing [99 Words] awaits on its website.

[99 Words] belongs to more than two dozen line upon line commissions. The group takes pride in “supporting living composers–people who are trying to pay their bills by writing.” And it often enlists them to create their first percussion works.

“In our minds, they’re incredible composers. But they’re not household names in our world,” Teodori says. At Big Medium, line upon line tries to connect music and listeners with the help of “the experience and the vibe.”

“We try to keep things casual,” Teodori says. “We have free beer at our shows. The stage is close. … It’s not an intimidating environment. We work really hard to keep free of that.” 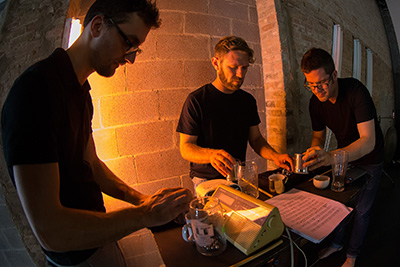 “We have found that, as (Austin) has grown, there’s a growing interest in this sort of music,” Teodori says. Who’s in the audience? “A lot of creatives. We have several architects who attend almost everything we do. There are some folks who came over from the symphony but maybe haven’t been to the symphony in a while–they’re interested in branching out. Some younger folks. We get a pretty good turnout from university students…and professors who are interested in new music. So it’s diverse. And that’s real exciting.”

Founding a percussion group was hardly what line upon line’s members envisioned when they were young. They all grew up dreaming of rock bands, Teodori says. By the time they met at UT, they were at home with the world of university ensembles. Teodori aimed for a career in orchestras. But a concert featuring music for a handful of percussionists introduced them to a new option.

“It was the most fun we were having out of everything we were doing in school,” Teodori says. “That’s when I discovered this world of playing music with your friends and commissioning new work. It all sort of clicked. As soon as I knew that was a thing, I sort of dropped the orchestra,” he adds with a laugh.

“It’s a big project–starting something from scratch,” Teodori says. “We all went to school learning to be percussionists. When you get out of school, you have to learn the business side of the nonprofit world: fundraising, having a board, bookkeeping and writing grants.”

“It’s a little bit of a grind, sometimes,” he acknowledges. But line upon line has grown to the point that it provides a regular paycheck. The three musicians have to flesh it out with teaching and other performing, but it’s consistent. And as of this year, they get health insurance through the group.

“It’s a real blessing to do what we get to do,” Teodori says. “We still have a long way to go to get it where we want it to be. A lot of that is just hanging in and keeping at it. It’s nice to see it grow.”