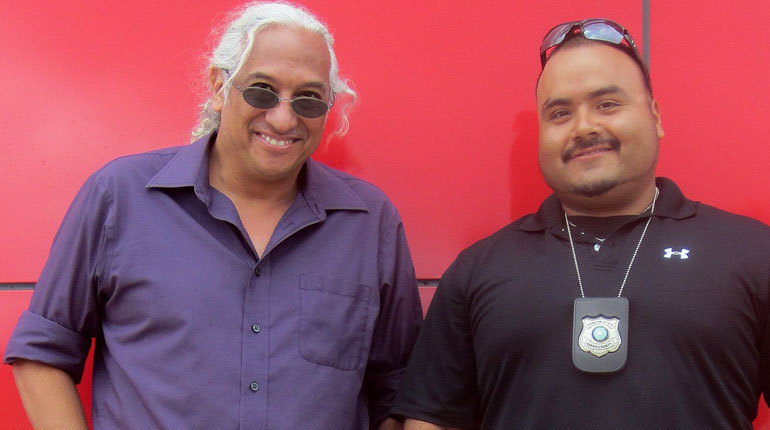 Having signed an agreement with the Harris County Juvenile Probation Department not to photograph the kids or use their real names in this story, I ask the three 16-year-olds at the Raul Yzaguirre School for Success’s high-school campus on Broadway in Houston’s eastside what they’d like to be called.

“RG,” says the biggest and tallest of the three – the one with an affinity for wordplay who referees soccer games for extra money, plans to be a UFC fighter and included a photo of the late Tupac Shakur in a collage to honor the man he calls “the greatest poet who ever lived.” He’ll go long stretches without saying a word, then drop a rap lyric or an unexpected observation out of nowhere.

“JT,” says the group’s baby-faced extrovert, who wants to become a forensic scientist and go into the Navy. He’s a mentor to his younger brother, taking home workshop assignments for his sibling to try out, but he’s also a provocateur who surreptitiously filmed his brother performing a laughing-mantra exercise from week four – “Ha-ha-ho-ho-hee-hee,” clap – posting it on Facebook and watching the “likes” pile up, to his brother’s dismay.

Looking over at the third member of the trio – a wiry guy with a shy smile who likes “messing with computers,” decorated his notebook with pictures of “nothing but females” and wants vocational training – RG says, “Say ‘Swisha.’”

Their teacher, Ben Tecumseh DeSoto, jumps in. “You mean like Swisher Sweets?” he asks, referring to a cigar often used for rolling blunts.

“Why, what you know about that?” JT shoots back.

DeSoto is indeed well-read; in fact, the pilot Whole Mind Workshop that RG, JT and Swisha recently completed draws heavily from research by Daniel Pink, author of A Whole New Mind. But DeSoto’s here not only because of what he’s read, but because of what he’s seen firsthand.

“The reason I got into teaching is because of my street photography, my documentary work, and being exposed to a lot of kids that were shut down or resource-poor, “ says DeSoto, a former Houston Chronicle photographer I first met while previewing his 2008 DiverseWorks exhibition Understanding Poverty. “Or they were living with people with second- or third-generational trauma, so their wiring is all screwed up. I’ve got a couple of my nephews that ended up going through the system. One got convicted as an adult at 15 and spent the last 15 years in prison and is just now getting out in the world.”

DeSoto’s had multiple irons in the fire since leaving the Chronicle in 2007, including working with FotoFest’s Literacy Through Photography program and teaching a Visual Literacy Academy at Neighborhood Centers Inc.’s Ripley House in Second Ward.

But while he drew from those experiences along with Pink’s writing to develop the Whole Mind Workshop, it was his work on a seemingly unrelated passion project – an upcoming documentary about The Island, Houston’s first punk-rock venue – that greased the wheels for the pilot course.

While working on Night at the Island with fellow punk fan Mike Schneider, DeSoto was surprised to learn that Schneider had ended up a state district judge who is alsoand a member of the Harris County Juvenile Board and the Harris County Public Defender Board. Schneider told DeSoto to send him an email, and the doors opened up accordingly. Now Schneider’s involved in another DeSoto film, The Change From Within, which will document reform movements within the foster care, criminal justice and medical delivery systems. DeSoto is launching a Kickstarter campaign to fund the $14,000 project. (Click here for the link, or to contact him about donating workshop supplies and equipment.)

As for the Whole Mind Workshop, it “has received universal praise from the probation department as well as the kids who have gone through [it],” Schneider wrote in an email. “It is not only important because of its immediate therapeutic value to the kids but because it equips these at-risk children with long-term trade skills and a radically new perspective on the world and their ability to be creative in it.”

Robert Mottu, a juvenile probation officer with the Gang Supervision Unit, sat in on the pilot class, which included eight students, seven of whom attended consistently. He was a little worried at first, since the kids came from rival gangs, but the students came together as a group and became more compliant with their probation. One student, who used to have “Crips” as part of his name on his Facebook page, dropped the word from it shortly after completing the course.

The workshop, which included lessons on drawing and design, storytelling with an emphasis on visually evocative metaphors, and how to apply psychologist Paul Ekman’s research on recognizing emotions from facial expressions, as well as time spent listening to rap – and, yes, punk – together, was scheduled for six weeks. But it flew by so quickly that the kids asked – and unanimously voted – to extend the workshop another week.

Each class lasted an hour but could go 90 minutes if they had snacks, according to exit surveys. RG suggests adding video to future workshops – and there will be future workshops, since DeSoto and Mottu are working to expand the program.  DeSoto’s wish list also includes a computer so he can add a digital component.

What about art museums? I ask.  Have the kids ever been to any?  “I’ve been to one but I forgot what it was called,” JT says. “It was far from where the school was.”

RG says, a bit defiantly, “My notebook is my art museum.”

That haunts me all the way home. The day after meeting the kids, I tell DeSoto I’m buying a printer and ink cartridges so he can print more collage fodder instead of having to rely solely on magazines. I email DeSoto and Mottu an image of the Museum of Fine Arts, Houston’s ancient ceramic Ballplayer (600-900), who played a Mesoamerican precursor to soccer, thinking RG might add it to his notebook-museum.

But I also want RG, JT and Swisha to see it in person. I now understand how DeSoto’s projects snowball: Once he gets you hooked, one idea leads to another. What about field trips to Project Row Houses, to the Station Museum’s graffiti show, to the Menil Collection? DeSoto and Mottu are all over it. I call up the MFAH, which donates free, untimed Picasso Black and White tickets and audio-guide passes, then pick them up and hand them off to Mottu, along with a challenge: If they go to the exhibit, I’ll buy them memberships so they can go back to the MFAH anytime they want.

I will have filed this story already before I know how many of them take me up on it. I hope they all do, because when I was 16, I too had a notebook-museum. But I also had a teacher who took me to what later became the Blanton Museum of Art in Austin. I don’t remember what she wanted to show us. I just remember what I found – a huge, stark, splashy painting by Adolph Gottlieb called Cadmium Red Over Black (1959) that blew my mind and made perfect sense to me all at once. I sat alone in front of it until we had to go and bought a postcard with its image, my notebook-museum’s first acquisition.  The notebook’s long gone, but my museum has never stopped expanding.