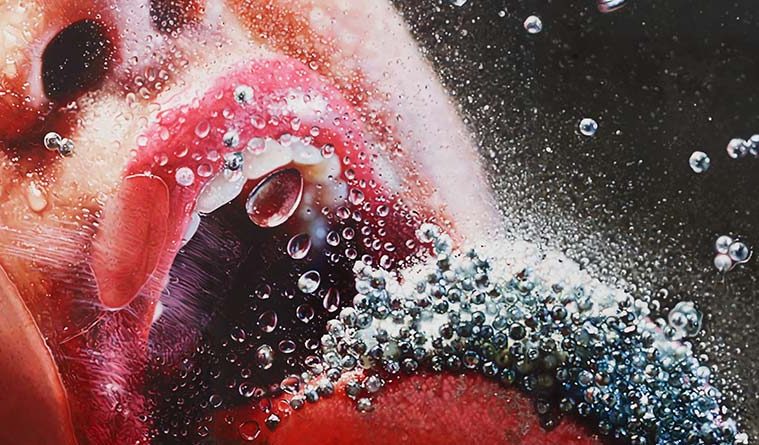 Engaging the Fraught History of Painting 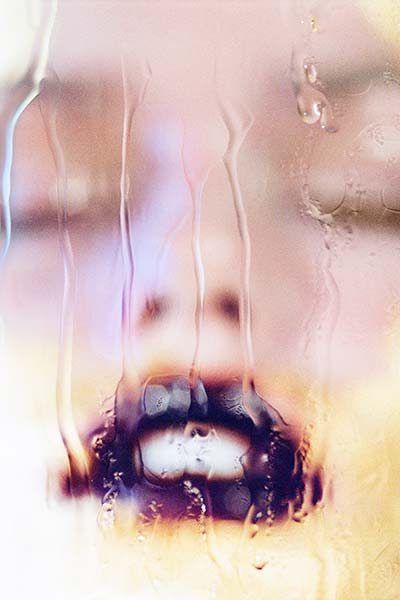 Perhaps the most obvious, but important-to-note fact about Pretty/Dirty, the CAMH’s presentation of the work of Marilyn Minter, on view through August 2, is its devotion to the exploration of one artist’s work across a career of many decades. It’s a full-blown retrospective, the kind which offers an in-depth didactic on the evolution of the artist (for the uninitiated), and a combination of greatest hits and lesser-known works (for the fangirls/boys).  Retrospectives are certainly not a new species in the curatorial phylum, but they are still woefully scarce in the case of female artists so the museum deserves both a pat on the back and a “geez, finally,” for launching a major exhibit of an important artist who happens to be a woman.  Another win for the museum is that this traveling exhibition originates here on our ‘third coast,’ followed by stops at the Orange County Museum of Art and finally the Brooklyn Museum.

The second, less-obvious thing to say about Pretty/Dirty is that while it is an auspicious show featuring a female artist, Minter’s paintings in the flesh deal less with “women’s issues” than one might think. The work she is best known for—near billboard-scale close-up images of models and their exoskeletons of gaudy cosmetics—heavily references the world of fashion. The difference between these images and actual billboards is in their garish closeness and obsessive painterliness. While fashion maintains a comfortable distance, Minter puts us inside the fleshy and slavering mouths of her models, or pushes us up uncomfortably against their skin. Much is made of her insistence on ‘imperfection;’ (stray eyebrow hairs, freckles, etc.); the CAMH’s catalog essay touts this feature of the work, “In the age of Photoshop, where things such as freckles disappear from fashion and entertainment magazines, this painting can be understood as marking a final celebration of the attractiveness of the un-retouched human face.” 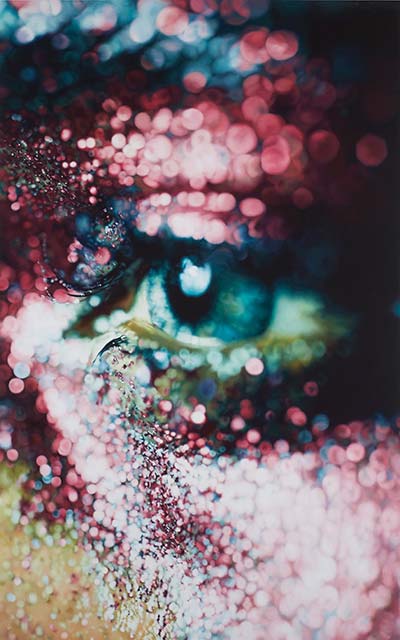 But Minter’s larger interest seems to be the desire to revel in her medium and its fraught history.  Sure, she draws on fashion as a motif, but the neat thing about a retrospective is that you get to see an artist develop ideas and affinities over time, and Pretty/Dirty reveals a process artist with a keen eye for trends in the art world, not on the runway. There is no dearth of paintings-of-ladies in the history of art (in a funny coincidence there’s a concurrent Rubens show across the street at the MFAH, just bursting with pearly-fleshed nymphs), but Minter’s zoomed-in and slightly less-idealized version is no less a distortion, a point of view that tells us less about the subject than the observer: a technician of virtuosic skill. The earliest works in the show find her grappling with a Minter-esque form of 1970s minimalism: a canvas divided into two geometric segments. Hardly content with reductionist form and color, Minter coolly layers on pattern and texture, revealing a sheet of plywood against a stained linoleum floor in institutional green.

And this is really where the feminist aspect of Minter’s work lies: in her seemingly effortless mastery of a medium so historically dominated by males. She paints big and unapologetically, resulting in paintings designed for museum retrospectives. Throughout the years we see her trying on the mantle of style as it relates to painting, the Neo-pop print dots of her Big Girls/Little Girls are reminiscent of a star-gazing Sigmar Polke. Her latest work further blurs the makeup-encrusted models, placing them behind a layer of painstakingly reproduced graffiti strokes. A video of a television commercial, 100 Food Porn, produced by Minter in 1990 perfectly encapsulates her propensity to straddle the “timeless” world of art: a place where images have the potential to echo for centuries, and the fleetingly fabulous imagery of advertising.  Evidently, the commercial was produced to prove the point that “at the time it was cheaper to do a thirty second TV ad than to take out a full-page ad in a major art magazine.” 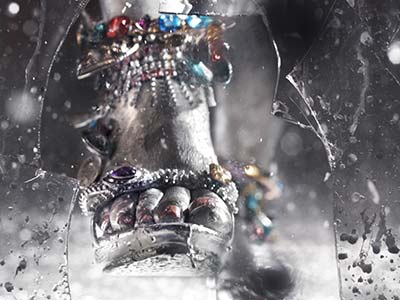 Appropriating advertising to level a critique at the art world is Minter’s strongest contribution. An experienced and savvy creator of images, she’s noted the potential of shiny objects, billboard scale, and pouty female mouths. And because she uses the language of advertising so effectively her paintings could easily be written off as a simple critique of that world alone. But, staring up at a twelve-foot-tall open mouth rendered on slick aluminum, almost imperceptible brushstrokes can be detected; up close the viewer is lost in glowing color, just as the painter would have been.

In the course of Minter’s 40-plus year career, painting has been declared dead, resurrected, and declared dead again. If Pretty/Dirty were the only evidence for painting during that time, we would never know. Minter’s deadeye brush has toyed with trends in the world of art and poked fun at its history, but rarely wavered from the continuous, sometimes transcendental, sometimes drudging work of being a painter.