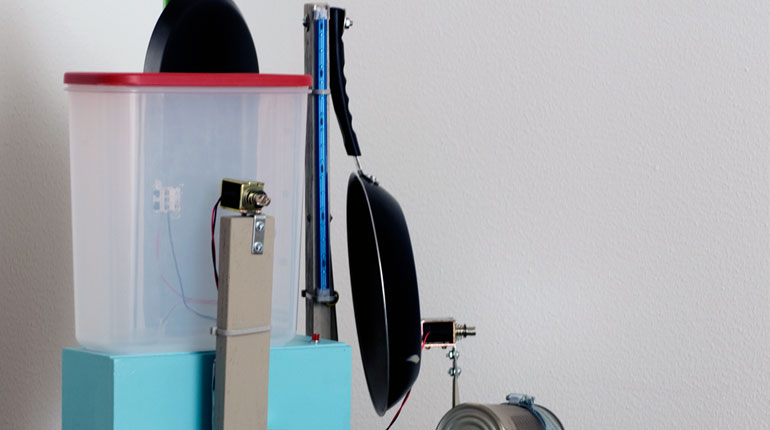 New media. It is the hottest trend in the art world. But what happens when that new media, ed which in this case includes flashing LED lights and music generated by uniquely written computer code, also includes Wal-mart issue pots and pans and Tupperware? In the case of Joel Sampson’s work in Conduit Gallery’s Project Room, it becomes a loud, blinking, banging, musical sculpture that Sampson calls Kinetic Percussion.

A+C:   How did you come to creating this work?

SAMPSON: It just sort of evolved. There is nothing new in art and there is nothing new period. That is the problem with contemporary art. In the search to do something new, it’s often garbage. I made the first Kinetic Percussion piece in late 2011 for the Texas Sculpture Association’s exhibition at the Plano Art Center. I entered the work, Pan, Can, Bam!, which is also in the Conduit exhibition. Part of the fun of this is setting it up. People know that they aren’t supposed to touch the art, but here is this big red button. Then some brave person touches it and then they step back. The balance is to make something visually interesting that sounds good, too.

I isolate each object’s sound and record it. Then I edit down the sounds and write a musical composition. When the solenoid fires, the LED and other lights are triggered. The LEDs add visual interest. Then I put together a musical composition in music software, which makes it easier to edit. Next, I code it into a C-language program. I’ll make a few modifications after this step. I have developed data structures on how to do all of this. All the code is custom written. So there are lots of parts to this.

A+C:   What background do you have that has led you to create kinetic art, including writing code?

I have been doing photography since I was 13. I have also been a ham radio operator. I have an electronics background. Additionally, I have been playing flute since second grade. I was a woodwind major when I started college but eventually switched to broadcasting. My first job was at a radio station. I have studied a lot of music theory and have a background in electronic music. I also did set design and theater lighting. I earned a special degree in video and cinema production. I liked making film but it was too expensive. That is how I got into still photography.

I got a master’s degree in journalism and learned to do graphic design while selling advertising. In that job, I learned to set type and use a copy camera. It was a good learning experience. Then I transferred to Ohio State University to study the history of photography and art. When it came out (in 1977) I bought the TRS-80 Model 1, the first personal computer on the market and I taught myself to program. I eventually earned a master’s degree in computer science from the University of Dayton.

Then I transitioned to writing and industrial photography. I wrote lots of manuals and was a contributing editor for a studio photography magazine. I was also the first person to write a computer column for a photography magazine. As an artist, I have done collage and straight painting. I am always looking for something new. Non-objective painting never hit me as a concept that I really liked. This sculpture has been an evolution. I eventually want to do something with motion.

A+C:   How do you see the work’s continuous evolution?

I am getting the computer part down. I am experimenting with design objects. I might mount one instrument at a time so it will be one piece. I might put a larger sound element on it. I am looking for stuff that is kind of funky. I want to start looking around at more flea markets, such as Canton, for unique objects.

When it is sold, I give the buyer the schematic diagram and code for it so if I get run over by a train, someone can fix it. This work uses solenoids, which are made in China. I try to use as many American made products as possible. Unfortunately, American solenoids aren’t as good.

A+C:   You are truly using new media. What has the response been?

People either love it or they hate it but they always remember it.