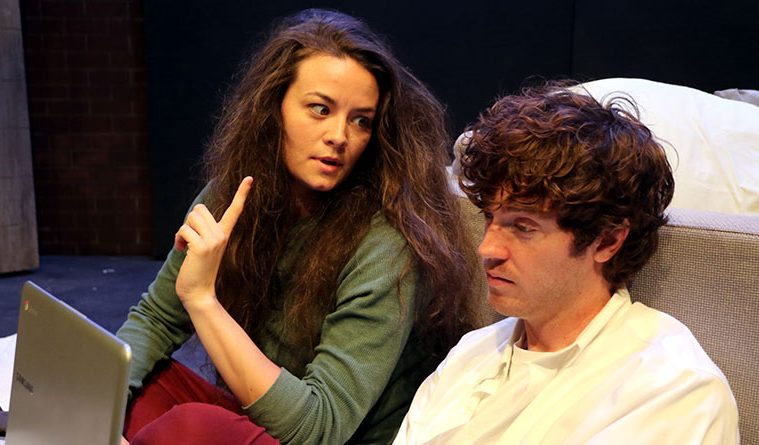 Entertainment + Education: The Rivalrous History of Fort Worth Theater 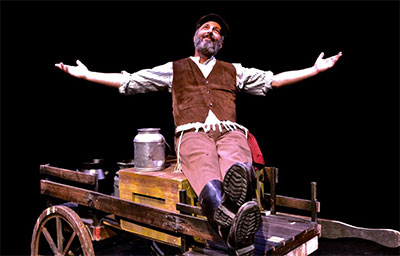 Bruce Winant as Tevye in Casa Mañana’s production of Fiddler on the Roof, through Oct. 4. Photo by Samuel Rushen.

For the sake of a succinct narrative, Casa Mañana produced the first official show on a Fort Worth stage in 1936. However, Buffalo Bill Cody brought his Wild West show to town in the late 1800s and even built a bordello in the area now known as the stockyards. But debating the merits of his horse and gun shows as theater will be saved for another time; Fort Worth theater as we know it today began when Dallas was chosen as the host city for the Texas Centennial Celebration. And what a beginning it was.

Not one to let Dallas hog the spotlight when Big D raised $20 million to host the first World’s Fair south of the Mason-Dixon line, Amon G. Carter, the founder of the Fort Worth Star-Telegram, built a 4,000-seat amphitheater and began planning a huge exhibition of his own. He wanted something big, something with panache. He originally commissioned a few of the town’s women to produce a theatrical production, so they planned one about the history of the city. But he was wildly disappointed with their genteel showmanship (the invitations read, “Texas history, watch it grow, at Fort Worth’s Centennial show”). To his mind, that wouldn’t draw the crowds away from Dallas, so Carter grabbed the reins and reached out to Fort Worth native Rufus Le Maire, MGM’s casting director at the time. Bigger. Flashier. Better than Dallas.

Le Maire suggested flashy Broadway producer Billy Rose, whose show, Jumbo, a bombastic circus musical, was playing New York’s Hippodrome at the time. Carter gave Rose four months and $500,000 to create the Show of Shows, an over-the-top spectacle. In his proposal for the show, which is quoted in Maurice Zolotow’s unpublished manuscript Billy Rose of Broadway, Rose wrote, “We have to give them girls and more girls. Your only chance of bucking Dallas is entertainment on a grand scale, with a strong western flavor, but meeting big-time standards in every way.” Carter was sold and so Casa Mañana, “The House of Tomorrow,” was born.

That one-show deal with Rose expanded into a five-show event dubbed Fort Worth’s Frontier Centennial, which required the fabrication of several more venues, including the Will Rogers Memorial Coliseum that still stands today. There was a Wild West show, and Rose even brought Jumbo from New York to Fort Worth, along with a host of other events. Billboards advertising the festivities read, “For Education Come to Dallas—For Entertainment, Come to Fort Worth.” 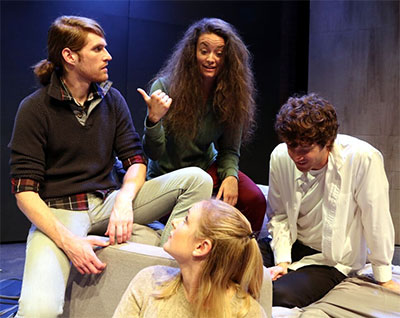 By all accounts, and some pretty scandalous photographs, the event was everything Carter dreamed of and more. It was such a smashing success that in 1937, the team reassembled to repeat the event. That year, one set for a show was comprised of 16 elevators raising and lowering showgirls. But the festivities closed early due to copyright infringements of Margaret Mitchell’s Gone With the Wind. Fines were owed to Mitchell; ties with Rose were swiftly cut.The following two years, the show attempted to go on without him. The final show in that amphitheater took place in September, 1939. The pre-show routine, which involved show girls in ice skates attempting to skate on a piece of plastic, had been paused the night Germany invaded Poland to broadcast Franklin Roosevelt’s address. Three days later the revolving stage spun its final rotation.

Casa Mañana returned in 1958 as a non-profit theater, unrecognizable as Carter’s extravaganza machine, apart from its continued interest in Broadway musicals (which no longer resembled Rose’s synchronized swimming/circus shows). The company has evolved from a house for musicals into an educational powerhouse in Fort Worth and a training ground for young actors.

This commitment to future generations is a hallmark for the Fort Worth theater scene. In 1945, Dickson and Flora Blanc Reeder founded Reeder School of Theater and Design for Children. For context, this was just two years before Margo Jones opened her legendary theater in Dallas’ Fair Park, where the city’s theatrical rivalry began. While Jones was revolutionizing the concept of regional theater, the Reeder School created a yearlong theater program educating children and teenagers in the process of playmaking. The company would begin working on a classic play in the fall, aiming for a summer production. The Reeder School was open until 1958, and revived in the 1980s. 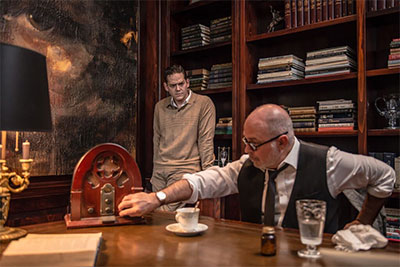 When Johnny and Diane Simons opened Hip Pocket Theatre in 1976, it was in the Reeder School lineage. To this day, the experimental company employs a mixture of music, pantomime and puppetry in its shows, many of which are written or developed in-house. Add in their outdoor performance space northwest of Fort Worth, and Hip Pocket remains one of the most interesting companies in North Texas.

The more traditional Stage West sprouted up in 1979 when Jerry Russell, who’d been acting at a community theater, quit his day job to pursue something a little more progressive. He established Stage West as a place that would perform classic plays alongside fresh, contemporary work.

After Russell’s death in 2013, Jim Couvalt took over major production duties, and Stage West amped up its seasons. The company recently announced its 2015-16 season and its one of D-FW’s most intriguing line-ups, with a wild mix of studio shows like the Broadway hit, Buyer & Cellar, and risky mainstage shows, like Robert O’Hara’s Bootycandy, an array of sketches about growing up black and gay.

In the same year Russell started Stage West, a young Rose Pearson directed her first professional show, Who’s Happy Now?, Oliver Hailey’s World War II play, in a small black box at the W.E. Scott Theatre, now part of the Fort Worth Community Arts Center. Two year later, in 1981, Pearson founded Circle Theatre, a company that she describes as a “theater buffet.” The small thrust stage in the underground theater space in downtown Fort Worth is the setting for plays by contemporary playwrights like Lauren Gunderson or Jon Robin Baitz, along with more classically minded plays. 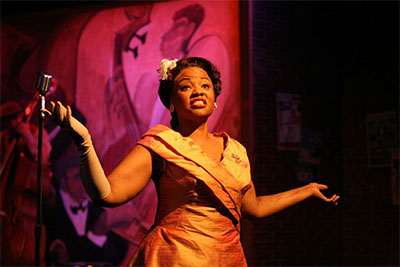 While all of these predominantly white theaters were popping up, Rudy Eastman, a theater teacher in Fort Worth ISD wanted to create opportunities for his fellow black thespians. Eastman teamed up with Erma Lewis, Ralph Stone, and Reverend Paul Sims to create the first black theater troupe in Fort Worth, the Sojourner Truth Players in the 70s. Performing the occasional show in Como, the city’s black neighborhood, left Eastman itching for more. In 1981, they invited more collaborators and founded the Jubilee Theatre. One of the shows that first season was A Raisin in the Sun, which Jubilee revisited this season for a sold-out run. Since the 80s, Jubilee has kept the critics raving with both new and classic plays.

This was the major period of growth in the Fort Worth theater scene. In the last thirty-five years, these four companies have expanded and contracted and expanded again in cycles, but have all sustained or developed strong reputations to rival any mid-size Dallas company.

It wasn’t until 1998 that another serious-minded company opened its doors in Cow Town. Artes de La Rosa manages the historic Rose Marine Theater in Fort Worth’s North Side. The company, run today by artistic director Adam Adolfo, focuses on shows that are Latino-centric, or presenting classic works reformatted for a cast of Latinos. They have performed critically-acclaimed productions of Sondheim’s Into the Woods, as well as a recent, steamy production of Romeo & Juliet.

On the campus of Trinity Christian University in 2000, three friends nearing the end of college decided to produce one last play together. The school donated the space and gave them access to the design departments. But, as they should’ve suspected, one play didn’t prove to be enough. In the halls of TCU, those one-off plays evolved into Amphibian Stage Productions, under the direction of one of those ambitious students, Kathleen Anderson Culebro. 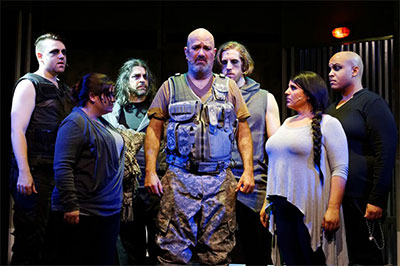 Desperate to get to New York, in its early days, the company  would do one play off-Broadway and one in Fort Worth. Culebro says they quickly realized that NYC didn’t need another company, and to invest full efforts into the city where they played a more pivotal role. Still a fledgling at 16 years old, now with a state-of-the-art venue on Main St., Amphibian stands out as the innovator in the theater scene. When Culebro wanted to attend the National Theatre Live screenings, but didn’t want to drive to Dallas, she partnered with The Modern to become one of the 400 cities in the country screening some of the best theater in the world. Amphibian retains an academic interest in the development of new work, working with playwrights on workshops or readings of new work.

TCU continues to play an important role in the other company to emerge in the 21st century. Trinity Shakespeare Festival has performed two shows per year since 2009 on the University’s campus and is widely regarded as the best place in D-FW to see the Bard.

Fort Worth theater in 2015 bears little resemblance to 1936. Touring musicals travel through the Bass Hall, managed by Performing Arts Fort Worth, but the city is mostly earning a reputation for serious theater thanks to its mid-size companies. These companies organize and collaborate under the umbrella of the Live Theatre League of Tarrant County, Texas, which includes theaters in Arlington and Grapevine.

The theater scene today, in spite of emerging from a rivalry with its moneyed neighborhood city, is filled with a cooperative, collaborative spirit. Although, noticeably missing out West is a Dallas Theater Center, which is to say a theater with a membership in the League of Regional Theatres, a designation that symbols a sizable contribution to national theater scene. In Fort Worth, the focus is bringing the best new work to the community through the talent of local actors and directors, along with an earnest commitment to the next generation through education programs at the theaters, as well as TCU. Perhaps now, the billboards would read, “For Entertainment Come to Dallas, for Education Come to Fort Worth.”