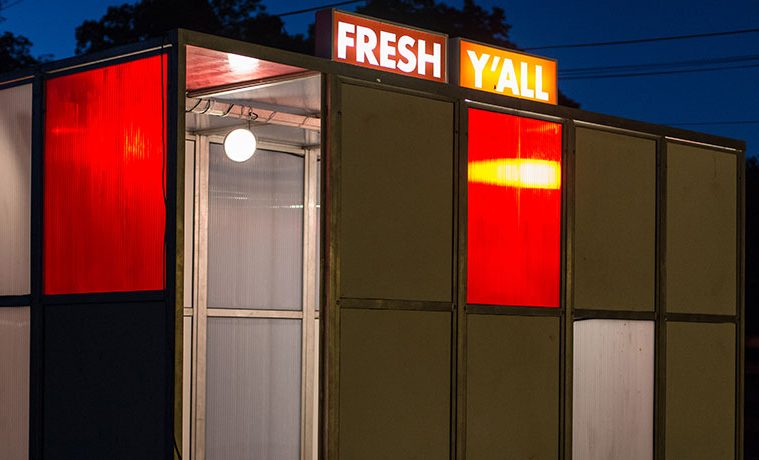 “People ask us all the time: This is what you do for your job?”

If you’ve recently stopped by Co-Lab’s Project Space in East Austin or their downtown location N Space on Congress Avenue, you might assume that this venture is the full-time job of the people running the organization. Their two exhibition spaces—along with such offsite projects as a recent popup gallery at 721 Congress and an annual catalogue complete with artist interviews on DVD—have kept the Co-Lab team extremely busy over the past few years. 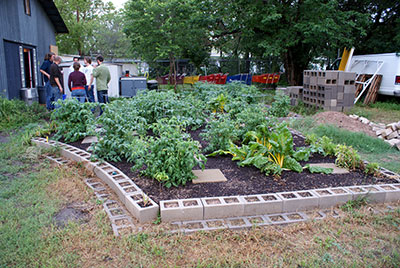 Co-Lab’s project space has a small garden, a mural wall, a fire pit, an outdoor screening area, and a bar where people can linger after shows. Courtesy Co-Lab Projects.

But Co-Lab Projects, which has grown and matured from its humble beginnings in 2008, is no one’s full-time paid gig. It is a labor of love, an organization without much hierarchy and with a lot of dedicated individuals working together continually to produce content for the rapidly growing city of Austin. And that is one of the many trademarks of an alternative space.

When Sean Gaulager paid the first month’s rent for 613 Allen Street, he wasn’t sure exactly what he would be “programming” there. The space, found on Craigslist, had a lot of potential. Sean moved into the house, situated on a large, mostly open lot just east of 7th Street and Pleasant Valley, and started to host one-night shows and events. With the help of Leslie Moody Castro and Amanda Winkles, Co-Lab Projects was born. They changed shows weekly and Co-Lab quickly became an incubator for Austin artists.

In the beginning, many of the exhibitions and events were with University of Texas art students focusing on new media, performance, and installation. “The first show I saw at Co-Lab, there was a girl sitting in the middle of space, naked and covered in blood, sewing receipts together,” says Austin Nelsen. “I said to myself, I am going to keep coming back here.” Co-Lab quickly became known as the place where you could experiment, where you could take risks. It was the only place in the city fostering this type of work. It also became a place where you lingered long after viewing the show.

On a recent Sunday afternoon, I sat in the project space’s yard with Gaulager, Nelson, and Chris Whiteburch—some of the artistic brains behind Co-Lab Projects. Nelson and Whiteburch joined Gaulager in late 2010 and early 2011. I remarked on how much the picnic table-dotted property had changed in the three years since I moved to Austin.

Whiteburch agreed. “There was a van over there, an outline of the garden, and a lot of trash,” he said, his hand sweeping across the field. “It became about creating a space for people to talk and exist in after the show.”

Wanting people to take greater advantage of what the property has to offer, they brought performance and sculpture outside. Now the project space has a small garden, a mural wall, a fire pit, an outdoor screening area, and a beautifully built bar where one can join “the mug club” and chat. This past summer, a swimming pool facing the mural wall was cleaned and filled every Saturday night to the delight of many hot and sticky patrons.

What will you see when you head to Co-Lab? The answer is: all kinds of work. Their very approachable application process allows for submissions while they also curate artists from across the country. And many artists make a point of branching out from their more commercially based studio process, particularly in the more experimental project space. “People want to try something new here and we encourage that,” Nelson says.

The first floor of Nelsen Partners on the corner of 9th and Congress was donated to Co-Lab in the fall of 2011, allowing them “to show works that were a bit more consumable without an overhead,” Gaulager says. “The most interesting experiments have been giving artists both spaces to branch out and experiment as well as have a viable space where they can actually sell work.”

Case in point: Claude Van Lingen recently had a two-part show called 1,000 Years From Now, Now, Now, Now, Now … … … at both spaces—with radically different results. At N Space, Van Lingen exhibited his meditative paintings, drawings, and some multi-media works while the work at the Project Space was a kinetic, mirrored video installation which viewers sometimes caught glimpses of themselves amidst the chaos. Both exhibitions dealt with linear concepts of space and time. “People do not believe it’s the same artist,” Nelson says. Next up: Nate Ellefson’s Soft Chop will be on view Feb. 8-15 in the Project Space, followed by Sara Mandandar’s something left behind (Feb. 22-March 1).

With N Space acting as the professional gallery, Co-Lab has started to sell some of the works from these exhibitions. Proceeds go right back into the organization, which relies on private donations, a grant from the City of Austin Cultural Arts Division, sales of merchandise, and bar tips. They are in the slow process of becoming officially a non-profit, which will open them up for more grants and donations from foundations, and are taking steps toward buying the 613 Allen Street property.

“Experimentation” and “experience” both stem from the Latin root verb experior, experiri—to try, to put to the test. And that is what the Co-Lab continually does. Sometimes they fail. However, they continue to make strides and push forward, taking the rest of Austin’s art community along for the ride.