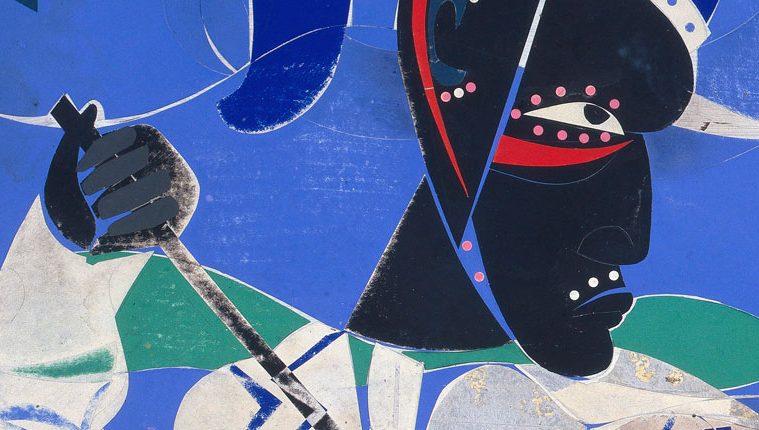 Cattle of the Sun God by Romare Bearden, cialis 1977.

In 1977, thumb Romare Bearden (1911-1988), view one of the most powerful and original artists of the 20th century, created a series of collages and watercolors based on Homer’s epic poem, The Odyssey. Rich in symbolism and allegorical content, Bearden’s Odyssey series created an artistic bridge between classical mythology and African American culture. The works conveyed a sense of timelessness and the universality of the human condition, but their brilliance was displayed for only two months in New York City before being scattered to private collections and public art museums.

On May 18, the Amon Carter Museum of American Art opens Romare Bearden: A Black Odyssey, an exhibition of nearly 50 artworks by the deceased artist. This first full-scale presentation of these works outside of New York City will be on view at the Fort Worth museum through August 11, 2013. Admission is free.

In the Black Odyssey series, Bearden establishes an artistic bridge between Homer’s poem – arguably the definitive work of classical mythology – and African-American culture by depicting Homeric characters as black players on the timeless stage of antiquity. As Bearden once said, “All of us are on a kind of odyssey. And I think this is what makes the story so lasting, so classic, and applicable to everyone.”

Robert G. O’Meally, the Zora Neale Hurston Professor of English and Comparative Literature at Columbia University and curator of the exhibition, suggests a still broader context to Bearden’s series, which assures us that the search for home, family, and a sense of belonging is central to self-discovery for all modern-day Americans regardless of race. “In creating the Black Odyssey series,” O’Meally says, “Bearden not only staked a claim to the tales of ancient Greece as having modern relevance, he also made the claim of global cultural collage – that as humans, we are all collages of our unique experiences. Indeed, Bearden does not merely illustrate Homer – he is Homer’s true collaborator, and he invites us as viewers to inherit Homer’s tale and interpret it as our own.”

Amon Carter director Andrew J. Walker concurs. “Bearden’s reinterpretation of The Odyssey has a universal appeal that will perhaps allow us all to reflect on our own personal journeys,” he says. “The artworks are beautiful and filled with vivid, saturated colors and geometric images that captivate the imagination. Because Bearden’s work is not in our collection, the exhibition offers an introduction of this important American artist to our visitors.”

Born in Charlotte, NC, Bearden moved with his family to Harlem in New York City as a young child, part of the Great Migration of African-Americans from the South to greater opportunity in the North. His family’s home became a meeting place for major figures of the Harlem Renaissance, introducing him to the world of art. He eventually received his degree from New York University, where he studied art and was the editor of the monthly journal The Medley. He also attended the Art Students League in New York and later the Sorbonne in Paris. He died in 1988 at age 76.

The exhibition provides visitors with many ways to learn about Bearden’s life and work. A multimedia tour is available as a free app on web-compatible devices, including smartphones and tablets, and works with Android and Apple operating systems. Visitors may also access the tour on one of the museum’s handheld devices, available for free check out during their visit. Visitors can create works of art by remixing Bearden’s collages in a free iPad app titled “Romare Bearden: Black Odyssey Remixes.” With this app, visitors can layer shapes and forms, and add written words and sound to a variety of Bearden backdrops. (This app is only accessible on visitors’ iPads; devices are not available at the museum.)

Within the exhibition visitors can discover Bearden’s influences, inspiration, and techniques through a 15-minute film. It features rarely seen interviews and footage of Bearden at work in his studio; poignant insight and analysis from O’Meally and Diedra Harris-Kelley, the artist’s niece; and commentary from his close friend and personal photographer, Frank Stewart. In conjunction with the exhibition, the museum will display the work of local artist Sedrick Huckaby (b. 1975), who credits Bearden as an important influence. Huckaby’s 18-by-14-foot oil painting Hidden in Plain Site (2011) will be displayed in the museum’s atrium through October.