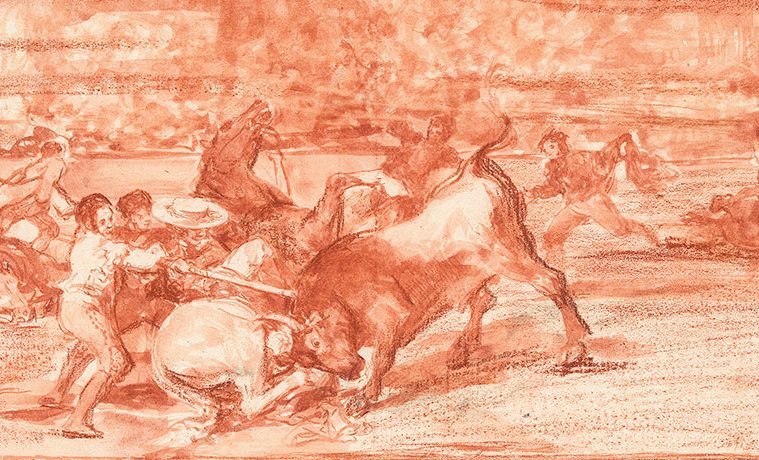 IMAGE ABOVE: Francisco de Goya y Lucientes (1746-1828), Two Groups of Picadors Overrun Consecutively by a Single Bull, 1814-16. Red chalk and red-ink wash on laid paper. Hamburger Kunsthalle, Kupferstichkabinett (38541). On view in The Spanish Gesture: Drawings from Murillo to Goya in the Hamburger Kunsthalle at the Meadows Museum in Dallas. Photo by Christoph Irrgang.

Home on the Range

The 22 sparsely populated counties of the Central West Texas region share a history as an important concourse for indigenous people, ranchers, farmers and merchants in the 19th and early 20th centuries. Work by important artists who documented early impressions of the area, historic photographs, oral histories and rarely-seen artifacts from private and public collections reveal a historical link to the area’s past. Through Aug. 8, The Grace Museum.

Discarded shoes, bodiless garments, animal masks and figures all suggest the existence of former selves in the work of San Antonio sculptor Ken Little, the selected artist for the 2014 West Texas Triangle exhibition. Little utilizes these “shells” to create works whose sense of humor belies notions of loss, nostalgia, death, voids and emptiness. Through Sept. 7, The Old Jail Art Center. 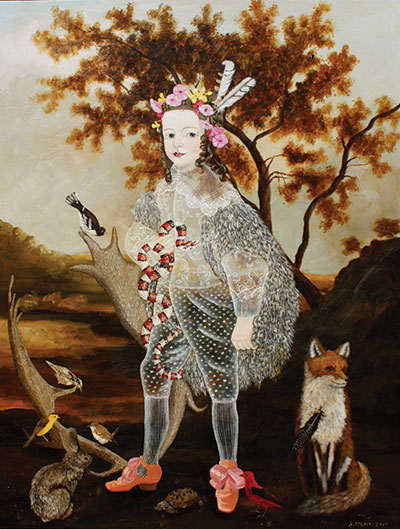 Siems is German-born and now lives in Seattle. Her figurative work has typically been influenced by the landscape of her youth. However, for this show, Siems explores the Pacific Northwest. Exploring a deeper connection with nature, she creates portraits not of solely the human figure but also of the old growth in the area. Aug. 9-30, Wally Workman Gallery.

The precise mechanics of Matt Norris and imaginative compositions of John Self combine in Lifecycles to create an ecosystem of interacting assemblage creatures. Both artists give new life to discarded objects—Norris with bicycle chain, nails and sheet metals; Self with “authentic garage sale artifacts”. Their art ties together the lifecycles of organisms with those of consumer products in this dual exhibition of sculptural work. Last chance: Through July 26, Art. Science. Gallery.

“By choosing to work with materials not traditionally associated with high art, Genger creates alliances within the larger social and economic community,” writes A+C contributor M. M. Adjarian. “Her choice of lobster rope further suggests that like the fishermen who used it to capture creatures from the sea, she seeks to ‘capture’ the viewers and recreational users of the Laguna Gloria landscape—or at least their attention and curiosity.” Through Aug. 24, The Contemporary Austin–Laguna Gloria.

The earthenware series in the exhibition includes Milnes’s “big heads” that play with the notion of what it means to know something, or to believe you know something.  The exhibition also includes a series of wall hanging sculptures influenced by the works of Ludwig Wittgenstein. Last chance: Through July 26, Cohn Drennan Contemporary.

The first retrospective of the American artist’s paintings in two decades includes 43 works spanning each period of Motley’s career, from 1919 to 1960. Motley’s scenes of life in an African-American community, often in his native Chicago, depict “a parallel existence of labor and leisure.” His work “examines this community, carefully constructing scenes that depict Chicago’s African-American elites, but also the worlds of the recently disembarked migrants from the South and other characters commonly overlooked.” The exhibition also features his depictions of Jazz Age Paris and 1950s Mexico.Through Sept. 7, Amon Carter Museum of American Art.

The Spanish Gesture: Drawings from Murillo to Goya in the Hamburger Kunsthalle

The Kunsthalle of Hamburg holds one of the most significant collections of Spanish drawings to be found outside of Spain. Much of the core of today’s Hamburg collection was assembled by Bartolomé Esteban Murillo (1617-1682) and was produced in and around the Academia de Murillo he established in Seville in 1660 with Francisco Herrera the Younger, Juan de Valdés Leal, Cornelis Schut and others. Among later works, together with Goya’s Tauromaquia prints and drawings from his Album B, the collection holds the majority of Goya’s drawings after Diego Velázquez that he subsequently used (or intended to use) for his etchings. Through Aug. 31, Meadows Museum, SMU.

Richard Phillips: Negation of the Universe

Presented in tandem with his monumental outdoor sculpture Playboy Marfa, which will be installed outside Dallas Contemporary, Phillips’s first U.S. solo museum exhibition will feature both past and new works that emphasize his career-long exploration of political and social identity, consumerism, eroticized desire and social constructs. Through Aug. 10, Dallas Contemporary. 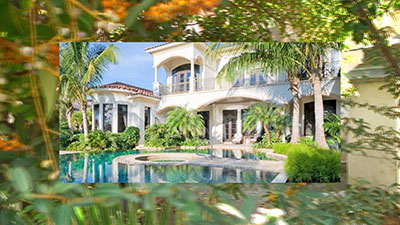 Laure Prouvost, How To Make Money Religiously (detail), 2014. HD video, 16 minutes. On view through Sept. 21 in More Real Than Reality Itself at the Contemporary Arts Museum Houston. Courtesy of the artist and MOTINTERNATIONAL.

More Real Than Reality Itself

Organized by CAMH curator Dean Daderko, this group show brings together single-, multi-channel, and installation-based video works by four artists who breathe new life into the medium’s familiar documentary parameters. Andrea Geyer, Camille Henrot, Laure Prouvost, and A. L. Steiner use video as a vehicle to communicate their unique understandings of the world. Their works expose video’s capacity for poetry, its materiality, and its ability to suggest alternative futures by reframing how we see the present. Through Sept. 21, Contemporary Arts Museum Houston.

The Woods traverses three continents to explore the rituals and conventions governing the on camera and off-camera personae of professional child actors, as well as adult actors who have become famous playing child roles. The trilogy brings together footage shot in Los Angeles, Mumbai and Lagos, seeking to observe and grasp the aspirational logic that is shared by Hollywood, Bollywood and Nollywood. Engaging actors and crews whose creative labor would ordinarily be subsumed into these three giant popular cinema industries, the three chapters of The Woods bring a behind the-scenes eye to industries that typically prefer to mask their inner workings. Through Sept. 6, Blaffer Art Museum.

Curated by Mike Holmes and Elizabeth Shypertt, founders of San Francisco’s Velvet da Vinci gallery, and Mexico City-based jewelry artist Lorena Lazard, La Frontera (The Borderlands) is an international exhibition of contemporary jewelry that explores the physical space where the complex relationship between Mexico and the United States is most evident. Ninety artists from the U.S., Mexico, Europe, Australia, and Latin America explore the underlying currents of the border environment within geographic, political, social, cultural, and ideological contexts. Through Sept. 7, Houston Center for Contemporary Craft.

Transcendent Deities of India: The Everyday Occurrence of the Divine

This group show marks the first joint presentation in Texas of works by photographer Manjari Sharma, graphic novelist Abhishek Singh, and the Raja Ravi Varma Press. The three artists render Hindu gods and goddesses in modern and contemporary forms to refresh the classical imagery, resituate the deities in the viewers’ frame of reference, and ensure their applicability in new eras. Through Sept. 14, Asia Society Texas Center.

“Through three video installations—Grand Paris Texas, Movie Mountain (Méliès), and the premiere of their most recent film, Giant—Hubbard/Birchler frame the traces that filmmaking leaves behind in physical places as well as in people’s psyches,” writes A+C contributor Nancy Zastudil. Sound Speed Marker also includes related photographs and a comprehensive catalogue due to be published in December. Last chance: Through July 31, Ballroom Marfa. 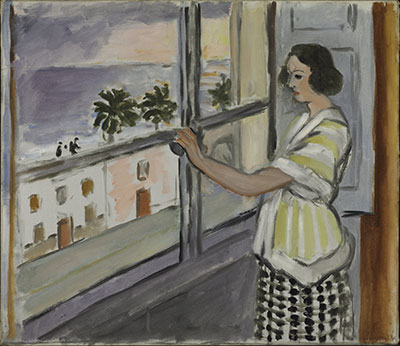 N’Gone Fall, an independent curator, art critic, and consultant in cultural engineering, has curated the new round of artist-in-residence exhibitions, inviting Kader Attia, whose installations and video pieces deal heavily with the interactions between Christianity and Islam and the post-colonial mire of Franz Fanon’s France; Dallas artist Margaret Meehan, whose installations, drawings and photos juxtapose the grotesque with the delicate; and Frisco-based Jungeun Lee, whose stark textile photographs and installations explore the relationship between human experience and cultural memory. July 10-Sept. 14, Artpace.

Matisse: Life in Color, Masterworks from the Baltimore Museum of Art

Most of the show’s nearly 100 paintings, drawings and works on paper come from the renowned Cone Collection, which was formed during the first half of the 20th century by Baltimore sisters Claribel and Etta Cone. They acquired some 500 Matisses spanning six decades, as part of a collection that included works by Picasso, Cézanne, Paul Gauguin, and Vincent van Gogh, as well as a variety of textiles, jewelry, furniture, and African, Asian, and Near Eastern art. Considered the Baltimore Museum of Art’s crown jewel, the Cone Collection’s Matisse holdings may be the best anywhere. Through Sept. 7, San Antonio Museum of Art.

The exhibition brings together more than 90 images representing Lieberman’s body of work as a photojournalist with the Associated Press and numerous publications, encompassing a broad spectrum of subject matter including celebrity portraits, sporting events, nature tableaus and aerial photography. Last chance: Through July 13, Tyler Museum of Art.

Email your upcoming visual-arts submissions with hi-res images to devon@artsandculturetx.com.