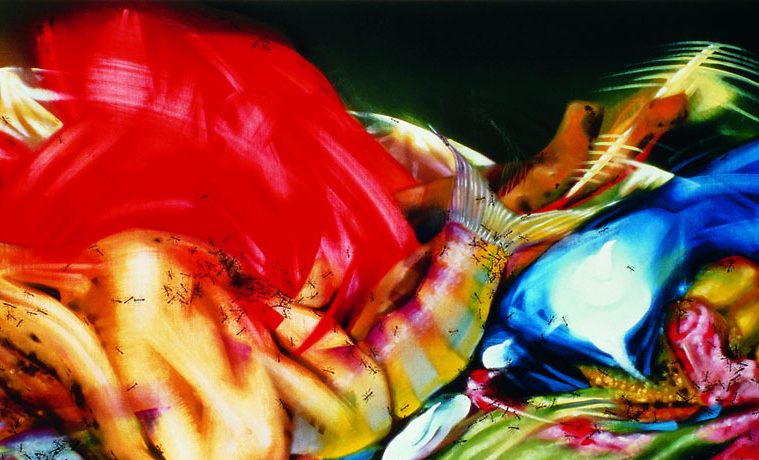 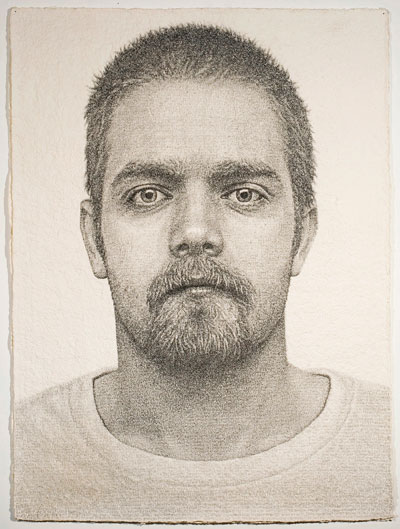 Still Life: Nocturne: Nick Brown The Los Angeles artist presents heavily impastoed oil paintings based on photographs taken at low tide of the plants and animals left behind by receding waves. The show comes with a soundtrack created especially for the exhibition by the Los Angeles duo Cardoo (Aniela Marie Perry and Marisa DeMeglio). Through Nov. 30, Tiny Park.

Ricardo Paniagua: Hard Edge in Da Paint Geometric, Op Art-related works by the Dallas artist, who told Glasstire in March that his work emerges out of “the opposition of energetics. It has to do with breaking the physical constraints or parameters or boundaries that life presents before you. When you do that, you become innovative because you don’t let it rest.” Last chance: Through Nov. 17, Big Medium.

The Singing Bone: Stephanie Chambers, Katy Horan & Kathleen Lolley Three artists bring visual, narrative form to themes of identity, memory, storytelling and history. Horan’s mixed-media collages examine historical female roles and representation. Lolley, who lives in the dark forests of western Pennsylvania, draws on surrealism and folk art to create work that’s “not about humans having a spiritual experience, but the spirits having a human experience.” Perhaps bridging the two, Chambers, who identifies as a genderqueer artist, says her acrylic paintings redirect the cultural tendency to organize people by age, gender, income and other “checked-off boxes” to the unruliness of the natural world: “I live with enough ambiguity projected onto me through assigned labels.” Last chance: Through Nov. 17, grayduck.

Marianne Vitale In Laguna Gloria’s lower meadow, the New York-based Vitale has installed a series of nine altered railroad “common crossings” or “frogs,” thousand-pound solid-steel components that are the switches or guides responsible for changing the direction of trains. At the Jones Center, Vitale presents a large-scale sculptural structure of two intersecting bridges that she built from wood and burned before transporting them to Austin. Through Jan. 5, The Contemporary Austin.

FOCUS: Terry Haggerty The London-born, Berlin-based artist “draws on the vocabulary of abstract art to create his illusory paintings and large-scale wall works. The artist’s central motif is created by painting patterned lines that alternate a light and dark color, such as white and blue. When juxtaposed, these colors play off each other, appearing to advance and recede.” Nov. 17-Jan. 5, Modern Art Museum of Fort Worth. 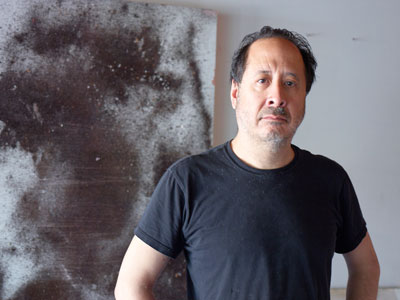 Concentrations 56: Stephen Lapthisophon—coffee, seasonal fruit, root vegetables, and “Selected Poems For his first U.S. museum show, the artist has created a series of tableaux incorporating anachronistic objects with more recent works on paper. The gallery will feature architectural elements inspired by his studio space. Through March 30, Dallas Museum of Art.

Joe Andoe: Paintings and John-Paul Philippe: Wabi-Sabi: Sculpture + Paintings A pairing of two New York-based artists with Oklahoma roots. Read Andoe’s Jubilee City: A Memoir at Full Speed before you go if you really want to set the mood. His five recent paintings are joined by Philippe’s steel sculptures, which “reference tall bird perches while doubling as figurative bird like poems,” and muted paintings of hill-like forms. Through Nov. 30, Barry Whistler Gallery.

Amy Blakemore/Sarah Williams This two-person show presents “Sarah Williams’ haunting paintings of isolated buildings, void of human presence in the quiet ‘after-hours’; along with Amy Blakemore’s offbeat photographs of ordinary events and people that provide an introspective view of human activity.” Last chance: Through Nov. 16, The Gallery at UTA. 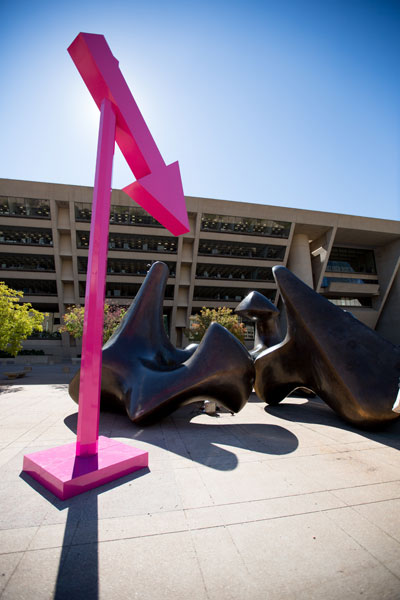 Rachel Harrison
Moore to the Point, 2013
Photo by Allison V. Smith for the Nasher Sculpture Center.

Marshall Harris: Death Do Us Part The Fort Worth-based winner of the 2013 Hunting Art Prize makes his solo debut with a selection of graphite-on-Mylar drawings, photography, cast-resin sculpture and video work. “Death typically refers to a finality,” Harris says. “But I’m interpreting it instead as a transition.” Last chance: Through Nov. 16, Red Arrow Contemporary.

Black Box: Photographs by Misty Keasler Formal portraits of the foam armament of taxidermy animals by the Dallas photographer. “The base of the work already exists in the world in fairly prolific, common places (it is easy enough to encounter taxidermy) but we aren’t accustomed to seeing the hairless amoebic forms here,” the artist writes. “They are simultaneously lifelike and at the same time they never look like real things in the world.” Last chance: Through Nov. 16, The Public Trust.

The Age of Picasso and Matisse: Modern Masters from the Art Institute of Chicago The Kimbell’s second Art Institute of Chicago loan show in five years features landmark paintings such as Matisse’s Bathers by a River (1909-16). This is as top-drawer a selection of European modernism as North Texas is likely to see anytime soon. Through Feb. 16, Kimbell Art Museum.

Circle of Animals/Zodiac Heads: Gold Smaller, gold-plated versions of Ai Weiwei’s globetrotting bronze Zodiac Heads have made their way to a city that’s thriving in our new Gilded Age. Through March 23, Crow Collection of Asian Art. 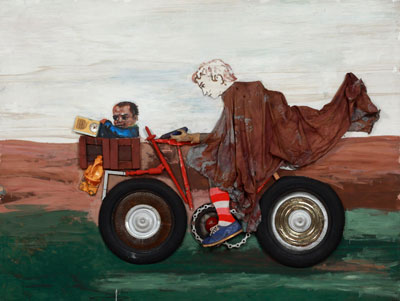 Antonio Berni: Juanito and Ramona Starting in the late 1950s, the Argentine master abandoned painting to make assemblages chronicling the tales of Juanito Laguna and Ramona Montiel, two fictitious characters he created and constructed out of trash, machine parts, and other castoffs. Their experiences exposed the undercurrents of Argentinean society. Nov. 10-Jan. 26, Museum of Fine Arts, Houston.

Weavers’ Stories from Island Southeast Asia Organized by the Fowler Museum at UCLA, the exhibition lets weavers and batik artists speak for themselves in videos recorded at eight sites in Indonesia, Malaysia, the Philippines, and East Timor. The videos are accompanied by newly made textiles created by each of the featured weavers and batik makers. Nov. 7-Feb. 9, Asia Society Texas.

Raychael Stine: a little ways away from everywhere In the Albuquerque-based artist’s first Art Palace show, “multiple ways of image-making live together to record the shift that happens from life into death through pictorial, formal, and material painterly explorations.” Nov. 1-Dec. 21, Art Palace. 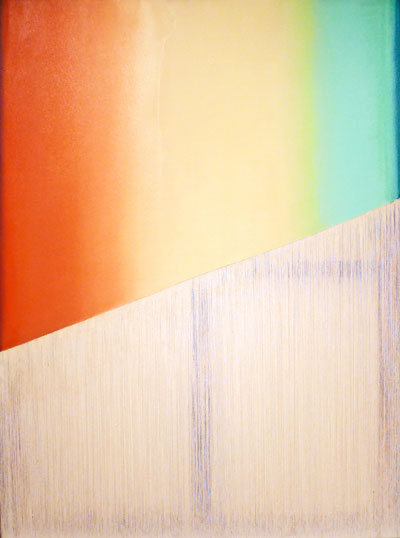 Rebecca Ward
Believers and Deceivers, 2013
Oil on canvas
Courtesy of the artist and Barbara Davis Gallery.

Rebecca Ward: shucked & silked The New York artist unravels painted canvas and stitches it back together in a process that sounds messy but yields beautiful Minimalist-influenced paintings. The example I saw at the Texas Contemporary Art Fair was ravishing. Through Nov. 30, Barbara Davis Gallery. 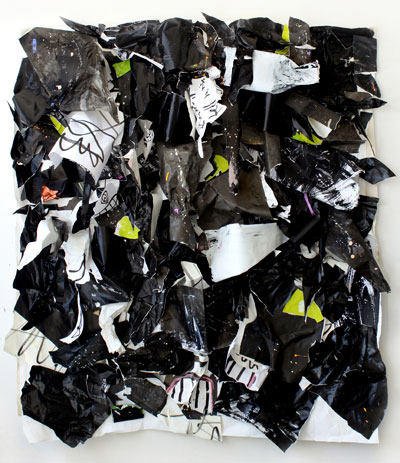 It was about time for a shift in the Houston painter’s work, which for the past several years has been characterized by cartoonish figurative elements duking it out with a whirling array of abstract elements from hard-edged to splashy. His latest show plays out similar tensions in what appear to be large-scale paper décollages reassembled onto large canvases. Last chance: Through Nov. 27, McMurtrey Gallery.

Joan Brown: Paintings and Works on Paper Works dating from the 1970s by the San Francisco painter who died in 1990. “From heavily impastoed oils, Brown quickly transformed her work to the larger, flatter, more emblematic paintings she is best known for,” a gallery release says. “Her travels to Mexico, Egypt and India began at this time to also inform her work as Images and symbols gathered from these trips begin to appear.”  Last chance: Through Nov. 16, Texas Gallery.

Nadezda Prvulovic: Blast Furnaces – Concluding the Series Prvulovic’s series of monumental gouaches on paper depicting industrial steel furnaces began in the early 80s, after the artist became inspired by the sight of abandoned melting cauldrons upon a visit to the steel factories in Thionville, France. Through Nov. 30, Anya Tish Gallery. 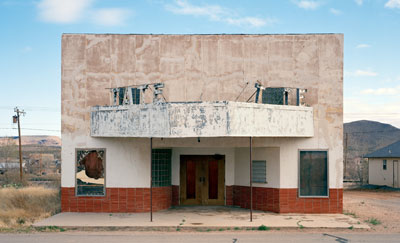 Eight, Eighteen Teresa Hubbard and Alexander Birchler present two video installations — Eight, which was first presented in 2002 at Artpace, and the world premiere of its follow-up, Eighteen — and a selection of other recent video and photographic work. Eight revolves around a young girl’s birthday party and her home on a rainy night. Almost a decade later, Hubbard/Birchler began searching for the actor and found her in Boston, where she has grown up to become a dancer. Through March 29, Linda Pace Foundation. 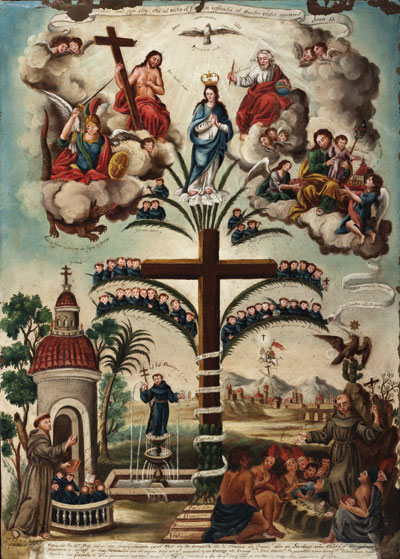 Texas Sculpture Inside and Out: Invitational Exhibition This exhibition will be held in conjunction with the 2013 Texas Sculpture Network Symposium and will consist of three parts: outdoor monumental sculptures, indoor sculpture and works on paper made by sculptors. Nov. 1-Feb. 22, Wichita Falls Museum of Art at Midwestern State University.