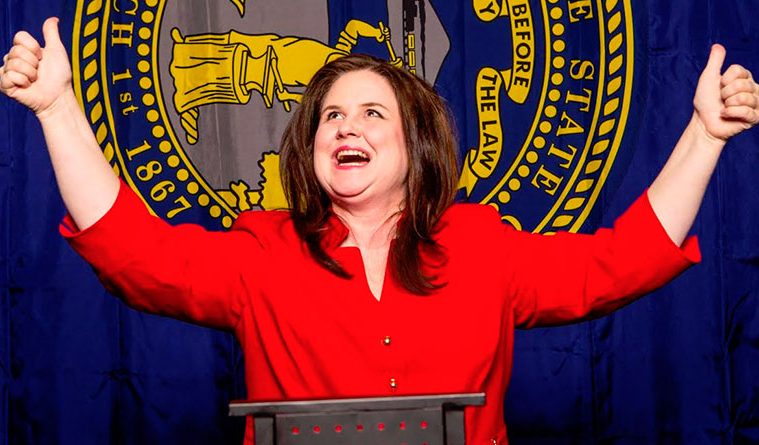 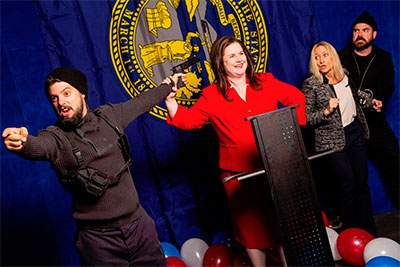 A charismatic political candidate with memorable hair who relies more on passion than facts — sound familiar? Peter Sinn Nachtrieb’s dark political satire The Totalitarians takes this all-too-real character and sets her not on the road to the White House, but state office in a somewhat fictional version of Nebraska.

In its first production since the 2014 rolling world premiere with the National New Play Network, Nachtrieb’s play lands at Dallas’ Kitchen Dog Theater through Dec. 19 at The Green Zone. A+ C writer Lindsey Wilson visited with Nachtrieb about The Totalitarians and why it seems so eerily current.

Where did the idea for The Totalitarians come from?

I started writing the play during the last major election cycle. There was a similar energy during those primaries as the ones we’re gearing up for now, and I wanted to explore those feelings on a personal level as well as a political one. I started noticing the decline of facts [among the candidates], and the weird use of language. The cult of personality drives a lot of people’s decisions, and creates its own momentum that becomes the driving force beyond what someone stands for.

The play is my response to the current political climate, which really does seem to be more intent on stirring emotions than solving problems. Stoking anger and outrage, making bold statements that sound very good but not really backing them up with actual concrete ideas or solutions…it’s lofty rhetoric but not a lot of pragmatic politics.

The character of Penny manages to hypnotize and bewitch the electorate; she grabs people emotionally before they can think rationally. You can’t pin Penny down on the political spectrum, and if you were asked what she actually does stand for, you wouldn’t be able to come up with a good answer. 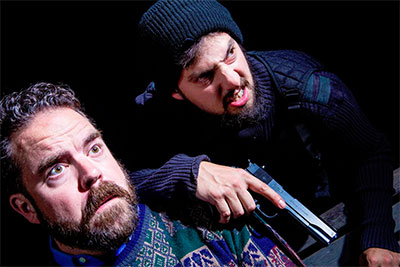 So that’s where Francine comes in?

Yes, Francine writes the speech that makes Penny the frontrunner. While Penny has this magnetic watchability, it’s Francine’s language that really creates the fervor. The humor is in political language and its general meaninglessness.

But Francine’s husband isn’t quite as taken with Penny as the rest of Nebraska seems to be?

Jeffrey is a doctor who’s been lying to his dying patients, and one of them starts to convince Jeffrey that once elected, Penny is planning to turn Nebraska into a totalitarian state. The play explores whether Jeffrey is jealous of or feeling threatened by his wife’s sudden success, or if he actually believes this theory.

How does Francine feel about the situation?

Francine has to put aside her beliefs about Penny in order to serve her own political ambitions. How much is she willing to ignore to find the success she hasn’t found before with another candidate? What, in the end, are people’s driving motivations for the facts they believe?

What was it like to write language that is “generally meaningless”?

There’s a big speech in the play, maybe 10 minutes long, where you actually watch this candidate become the frontrunner. It’s where I tried to absorb as many rhetorical techniques that have come about as possible. I wanted to see how I could write an absurd speech that could also be a game-changer. I love reading that speech to people. I often read it aloud while I was working on it, and it’s definitely one of my favorite parts of the play. The hardest part to write, too. 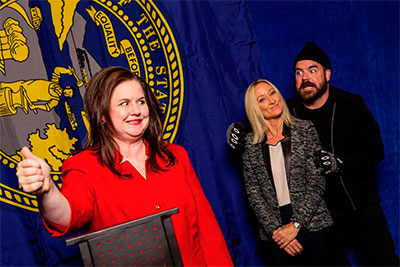 How did you research that?

I read a couple political memoirs of different campaign managers. There are also many repositories out there of famous speeches that you can read or listen to, and hearing those underlined how presentation is just as — and sometimes more —important as the message. At Woolly Mammoth Theatre Company, where the play had one of its premieres, I was also able to meet a lot of great political operatives and gain insight from them.

Did anything surprising occur while you were putting the play together?

There were lots of discoveries over the course of writing it, as it explores language. Every character has moments where they are failing at communicating or they are obscuring their own thoughts and not being successfully expressive. I had to let their stories evolve and deepen while trying to find a way to bring them all together in the end. Spoiler alert: It’s not a good ending if you’re into subtle and quiet.