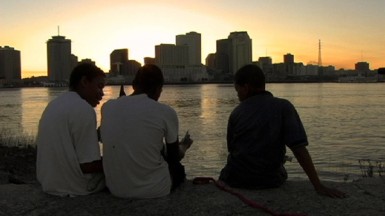 Tchoupitoulas (pronounced CHOP-it-TOO-luhs) is simply brilliant storytelling.  It’s something I have not seen done before, and it came across vibrantly original and engaging.  Brothers Bill and Turner Ross directed the documentary Tchoupitoulas, which is the name of a street in New Orleans, Louisiana.  This documentary has no real narrative or message, but rather an observance of the eccentricities and wildness of life in New Orleans. The film also won the Grand Jury Prize for Documentary Feature at the Dallas International Film Festival this year.

In Tchoupitoulas, we meet the three Zanders brothers, three young black kids (ages 10-14), who take a ferry across the river to experience New Orleans’s night life.  Accompanied by their loyal family dog, they enter New Orleans with open, innocent minds.  While the two older brothers try to assimilate into their surroundings, absorbing the visceral experience of New Orleans and the French Quarter, the youngest is more interested in his brothers than the city.  He incessantly asks questions about their opinions and aspirations. The type of questions he asks — such as, “What do you want to be when you grow up,”—reveal that the brothers rarely discuss their feelings or desires at home. The youngest clearly sees this trip more as an opportunity to understand how his brothers feel as well as learn how he should perceive the colorful city around him.  His questions and observations remind me of the Kubrick’s 2001: A Space Odyssey and Malick’s Tree of Life, in that his questions and thoughts are unrestricted and unanswered–leading the audience to their own conclusions.

The boys become stranded overnight when they miss the last ferry out of town. Between that midnight and morning ferry, the boys see a new side of New Orleans. They come across homeless people, jazz and blues musicians, rap artists, burlesque performers, strippers, tap dancers, drunk tourists, and an old abandoned luxury boat.  But, this movie is as much about the innocence of children as it is about the people and places of New Orleans. If the boys had been adults with preconceived prejudices and fears, we likely wouldn’t have had the opportunity to see such a diverse cross section of New Orleans. Nor would we have seen the openness and lack of pretentiousness that the adults showed these three boys.

The visual style of the documentary was also inventive, and the cinematography was a story within itself.  The wholeness of New Orleans is caught on film. The disco lights from the clubs, the reflections off the jazz musicians’ instruments, the car lights, and the darkness all play a vital part of the visual in this documentary. The Ross brothers have a keen eye and obvious passion for making this documentary flow musically and beautifully. In the Q & A after the Dallas International Film Festival screening, the Ross brothers admitted that the documentary was made to look like it was shot all in one night, but it was actually shot over nine months. It was clear watching the film that a lot of the production time was spent collecting footage of the city and its people.

By watching this film, the audience is able to perceive the very adult-rated New Orleans through a child’s eye. This lens of purity and innocence reveals the beauty in those parts of the city that we easily overlook as adults. As the movie Manhattan was Woody Allen’s love letter to New York City, Tchoupitoulas is Ross’s love letter to New Orleans. You’ll fall in love too.