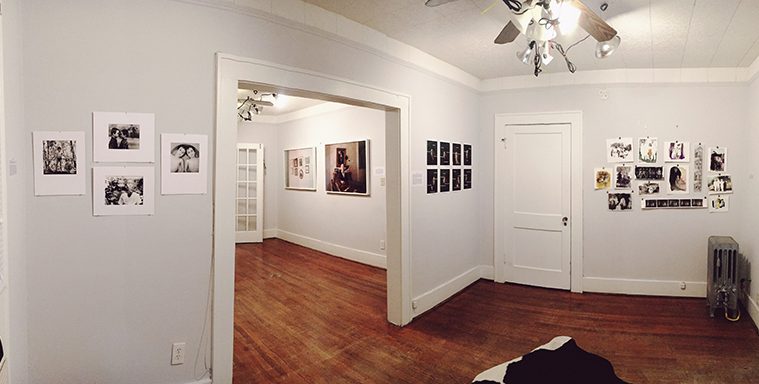 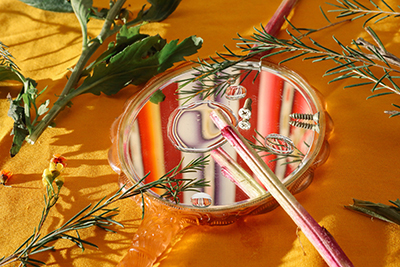 When you attend a FLATS show, you won’t be going to any art gallery you have been to before. In fact, you won’t be going to a gallery at all. FLATS is a Houston-based pop-up photo series, run by Jessi Bowman and Cris Skelton, that places first-rate photography exhibitions in peoples’ homes. Each event is styled around the venue, the people who live there, and the curators and photographers themselves. The result is an exhibition different from any gallery experience you’ve had.

They want to promote the idea of photographers living and working in Houston as a viable option. With more shows than ever on the horizon, in April featuring Hallie Gluk and Andi Valentine, a May solo show featuring the work of Margaux Crump, and a June show curated by Patricia Restrepo, Exhibitions Manager and Assistant Curator at the Contemporary Arts Museum Houston, FLATS is well on its way to achieving that mission.

Bowman and Skelton’s backgrounds have a lot to do with why they started FLATS. They both hail from Houston and have long histories of art immersion that have helped each of them to fine-tune their own artistic eye. Bowman holds a photography degree from the University of Houston and has been working at Houston Center for Photography for the past seven years. Skelton has a theatre degree from Texas State University and has worked with Mildred’s Umbrella, Horsehead Theatre, and was a founding member of Station Theater. He also brings a writing background to the table. Both Bowman and Skelton have event production skills: Bowman from her years at HCP and Skelton from his years of theatre.

The idea for FLATS came to them two years ago. After spending time in San Antonio and New York City, Bowman noticed differences in the artistic communities. She felt a disconnect between fine art gallery spaces and many of the photographers who create work in Houston, not to mention the majority of Houstonians who shy away from fancier gallery showings. “Houston is really great about bringing in outside talent,” she remarks, “but often falls short when it comes to the local community. We wanted to bring them together and provide more outlets.” Skelton was thinking about how, in the theatrical world, just because you aren’t currently in a play doesn’t mean you aren’t working. “We get together for readings at home, attend workshops, foster conversations among friends so that we are always thinking about theater and trying to get better,” he says of his community. 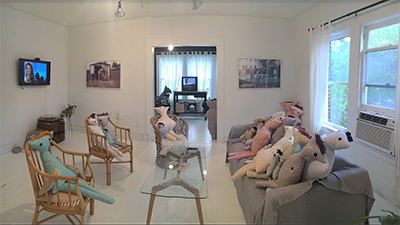 They focused their thoughts on the need for change within the Houston photography community, and the DIY aspect that so many theater practitioners foster. In April 2016, they hosted the first FLATS show in their own small Montrose apartment, featuring Jean-Sebastien Boncy, Anne Marie Darcy, Jason Dibley, Ryan Francisco, and Teresa Munisteri. They shoved most of their furniture out onto the back patio, took all of their own art down, got a keg, and hung some clip lamps for lighting.

“It went well and was really well attended!” says Bowman. “People stayed all night and it wasn’t until the end of the evening that we realized none of us actually knew them.” There is a special kind of pride that comes with the realization that your event drew a crowd that doesn’t consist of just your friends and family.

They now have eight shows under their belt and attendance ranges from 100-400. At the start, Bowman and Skelton anticipated having difficulty finding hosts, but now they have a waiting list. They were also concerned that people might feel weird about going to others’ houses, that it would be uncomfortable to view art in the personal spaces of strangers, but it turns out it’s a draw for many. The venue both diversifies the audience and makes the shows themselves more approachable. Bowman and Skelton, along with the host and the curator, work as a team to create an environment that reflects all of their styles. “We want to reach out to those young collectors or those who think it’s out of their budget and show them there are people living in these small fourplexes and complexes who are still collecting,” says Bowman of their target demographic.

This crowd isn’t one of homeowners. They often don’t have corporate jobs. They are young. But none of this means that they can’t appreciate photography, and one step beyond that, collect it. FLATS has never had a show that hasn’t sold at least one piece. And that’s money that goes straight to the artist; FLATS doesn’t take a cut.

The sense of community that Bowman and Skelton feel is obvious in their work. Both talk about how spread out Houston is and how that can make artists feel alone, especially in such a solitary field as photography. “It takes a ton of focus for artists to do their best work and they can forget to make time for the larger community,” says Skelton. “A more connected scene is a healthier scene no matter where you are, so creating a space like that for artists to get together, see some work from their colleagues, and meet potential patrons is something I think is vital to growing local Houston art.”

FLATS is an opportunity for Houston photographers simply to be in the same room, share projects, talk about technique, or just drink a beer together and hang out. To foster this sense of community, FLATS usually does group shows with one golden rule: There must always be at least one artist no one on the team has ever worked with before. They have done a couple of solo shows but work to make sure there is collaboration in other areas. For the upcoming May solo show featuring the work of Margaux Crump there will be a musical artist and a cocktail artist both creating works that are married to the work of the photographer. FLATS always holds the after-party at a bar near the venue to showcase all the different parts of Houston and what they have to offer.

Bowman and Skelton have several pie-in-the-sky dreams for the future of FLATS. One day they’d like to have their own house that can serve as headquarters for photography fellowships and a permanent exhibition space. They’d like to offer workshops and experimental photography classes while still doing pop-up exhibitions to feature local artists. Skelton talks about making an online zine for each show. Bowman recently gave her notice at HCP and will be exiting her position there in April, so she’ll have a lot more time to get to work on all of that. They also started a group called Alt Space with Terry Suprean and Alex Kelton of Civic TV Laboratories with a mission to provide organic space for discussion, support, and collaboration between the diverse group of people that keep the alternative art spaces in Houston alive.